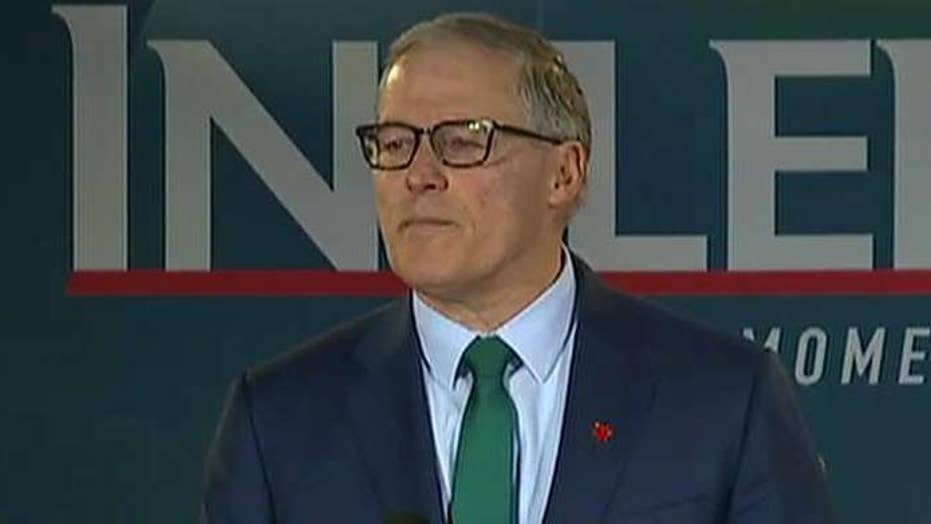 Franklin County, Washington Sheriff Jim Raymond says his department will continue to operate the same way they were before the new law was put into place.

But he grabbed some of the loudest applause from the audience at the Fox Theatre in Detroit with a shocking statement about the president. Asked about his stance on the divisive issue of illegal immigration, Inslee immediately blasted President Trump, arguing that “we can no longer allow a white nationalist to be in the White House.”

Many Democrats have labeled the GOP president a racist for his comments on race – including his most recent controversial comments blasting the conditions in Baltimore as a “rat and rodent infested mess.” Trump has adamantly denied he's racist and even pointed to similar comments from the lawmaker he was criticizing, Baltimore-area Rep. Elijah Cummings.

The line from Inslee, though, sparked massive applause from the audience.

Asked by Fox News after the debate if he had prepared the 'white nationalist' line in advance, Inslee explained "I thought about it driving over here this afternoon. And it’s true because the White House is such  symbol of the United States, of our unity, of the fact that diversity is a strength, not a vice, the fact that we’re a nation of immigrants. But he’s really despoiled it."

Inslee also targeted the GOP,  arguing "it is sad not only that he (Trump) has done that but worse that the Republican Party has enabled it. They’re complicit in his racism and his white nationalism because they will not speak against it.”

Inslee, a lower-tier candidate who’s not guaranteed a spot yet in the next round of debates in September – also emphasized during the debate that “we have to make America what it’s always been, a place of refuge. We have to boost the number of people we accept.”