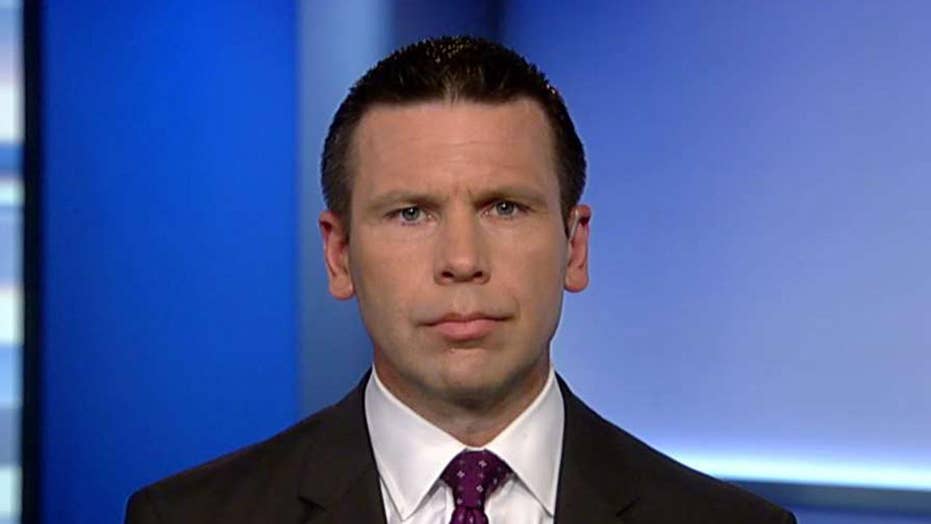 McAleenan: We need to address issue of families crossing the border

The acting head of the Department of Homeland Security is disputing accusations that U.S. authorities are continuing to separate children from their families.

"First of all, that is not happening. We're separating children in maybe one case a day out of the 3,000 families arriving," Kevin McAleenan said Thursday in an exclusive interview on Fox News' "The Ingraham Angle."

"It's very rare," he added. "It's for the safety of the child first and foremost."

McAleenan, 47, a native of Hawaii, was appointed to DHS by President Trump in April, after the departure of former Homeland Security Secretary Kirstjen Nielsen. He previously served as a commissioner of U.S. Customs and Border Protection, a unit of DHS.

On Thursday's show, McAleenan responded to a clip of MSNBC host Mika Brzezinski talking about family separations on Thursday morning.

"This is our responsibility as a country and as a nation," Brzezinski said. "We are not being given answers as to what is happening to small, young children, to teenagers, to girls, to boys [who were] being taken away from their families, from their parents and left alone in our custody."

McAleenan also discussed his recent appearances on Capitol Hill asking for funding, including a hearing where Rep. Lauren Underwood, D-Ill., asked him about the effects of separating children from their families at the border. She closed by claiming that children in U.S. custody were living in poor conditions and alluded to news reports that several children in U.S. custody had died.

McAleenan told Ingraham that he objected to Underwood's depiction of the situation.

"It's a sad state of affairs in our politics but we have an actual crisis and we have solutions on the table and clarity of what the men and women on the border need from Congress and yet that is the kind of thing we are hearing," McAleenan said.

"We are seeing younger children arriving sicker every single day. We had an H1N1 outbreak yesterday at McAllen [Texas] station, the infectious disease with the teenager who passed away on Monday. It looks like he had the flu, a very virulent strain of the flu, H1N1. We have seen measles, we've seen mumps, folks in ICE custody that are quarantined due to mumps. It's a tremendous challenge," McAleenan said, adding that the situation with smugglers exacerbates the illnesses.