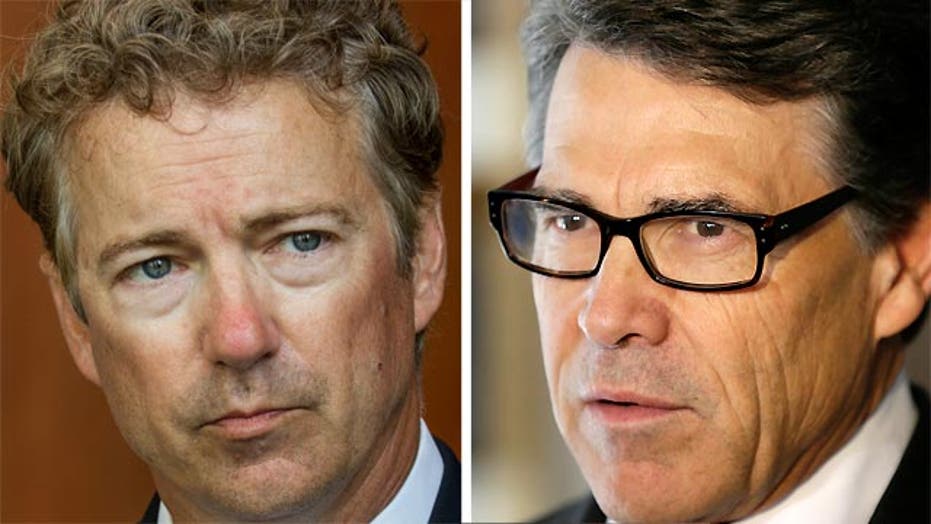 WASHINGTON – As literary feuds go, the pair of dueling op-eds by Gov. Rick Perry, R-Texas, and Sen. Rand Paul, R-Kentucky, was certainly no match for the epic spats of bygone decades – think Hemingway vs. Fitzgerald, Vidal vs. Buckley, Updike/Irving/Mailer vs. Wolfe – but in political terms, the Austin-Lexington set-to is already attracting partisans from diverse elements of the Republican Party.

Representing the GOP’s staunchly – and unapologetically – neo-conservative wing, Liz Cheney told a Washington audience Monday morning that Paul “leaves something to be desired” in terms of protecting U.S. national security.

Appearing alongside her mother and former Vice President Dick Cheney at a POLITICO Playbook Lunch event, Liz made clear she is not presently “endorsing anybody” in the 2016 GOP presidential nominating process, even as she defended her father and the Iraq War from attacks by Republicans who have been critical of the 2003 invasion. “I've got some big concerns about the extent to which Senator Paul thinks we can be safe if we just come home and try to build a Fortress America,” Liz said. “That’s clearly not going to work.”

Other foreign policy experts within the party seized the opportunity to suggest that the GOP needs, as a matter of both national security and electoral strategy, to move beyond the interventionism of the Iraq War era. Paul himself is fond of noting that Fox News’ Megyn Kelly told former Vice President Cheney, in an on-air interview last month, that that "history has proven that you got it wrong" on Iraq.

“He’s doing a lot to spark debate and to not just fall into step with the traditional military-industrial complex establishment,” said Elise Jordan, a former State Department speechwriter during the second Bush-Cheney term. “I don't think that anything about Rand Paul is necessarily that different from the classical realist, which is how I would categorize Condoleezza Rice and a lot of the bright stars of Republican foreign policy over the years.”

The foreign policy fisticuffs between the two possible contenders for the 2016 GOP nomination began when Perry, fresh from his high-profile confrontation of President Obama on the border crisis, penned an op-ed for the Washington Post on July 11. In it, Perry decried Paul as an isolationist whose approach to Iraq and other hot spots would “compound the threat of terrorism” and “endanger our national security.”

“I personally don’t believe in a wait-and-see foreign policy for the United States,” Perry wrote. “Paul is drawing his own red line along the water’s edge, creating a giant moat where superpowers can retire from the world.”

Paul lost little time in shooting back, publishing an op-ed in POLITICO Magazine on Monday that depicted the Texas governor as beholden to a reckless interventionist model that is “rooted simply in bluster.” A former practicing ophthalmologist, Paul even jabbed at Perry’s celebrated new eyeglasses, saying Perry’s horn rims have not “altered his perception of the world, or allowed him to see it any more clearly.”

“How many Texan mothers and fathers will Governor Perry ask to send their children to fight in Iraq?” Paul added. “I will not hold my breath for an answer.”

Analysts suggested that at this point in the presidential cycle, the staking out of policy differences and creation of buzz-worthy rivalries is a staple, and to be expected. Both Perry and Paul could conceivably build on the controversy between them to enhance voter outreach and raise money.

“The choice that republicans see in those two candidates was sharpened by the back-and-forth, because they’re both expressing different points of view,” said Fox News Contributor Jim Pinkerton, a former White House aide to the first President Bush. “I think that both Rick Perry and Rand Paul -- who chose to engage and then to stay engaged on the issue -- probably both think that this has helped them with their respective constituencies.”