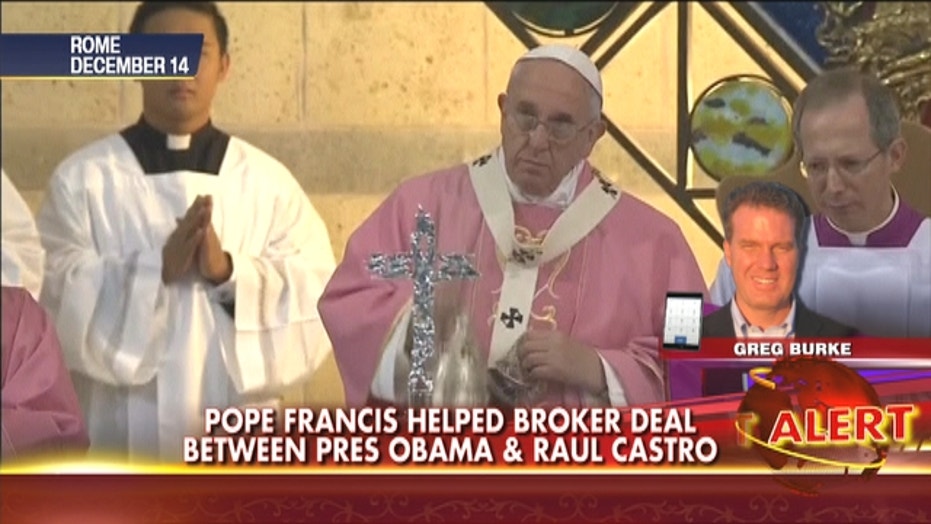 The United States and Cuba have agreed to establish diplomatic relations and open economic and travel ties, marking the most significant shift in U.S. policy toward the communist island in fifty years, American officials said Wednesday.

The announcement comes amid a series of new confidence-building measures between the longtime foes, including the release of American Alan Gross, as well as a swap for a U.S. intelligence asset held in Cuba and the freeing of three Cubans jailed in the U.S, and the release of 53 political prisoners in Cuba.

The announcement comes amid a series of new confidence-building measures between the longtime foes, including the release of American Alan Gross, as well as a swap for a U.S. intelligence asset held in Cuba and the freeing of three Cubans jailed in the U.S.

President Barack Obama and Cuban President Raul Castro were to separately address their nations around noon Wednesday. The two leaders spoke by phone for more than 45 minutes Tuesday, the first substantive presidential-level discussion between the U.S. and Cuba since 1961.

Under the agreement, the U.S. government has released three Cuban spies in exchange for a U.S. intelligence asset that has been imprisoned in Cuba for 20 years. The three Cubans were part of the so-called Cuban Five – a group of men who were part of the “Wasp Network” sent by Cuba’s then-President Fidel Castro to spy in South Florida. In exchange, Cuba freed an American intelligence official who was responsible for some of the most important intelligence and counterintelligence to come out of Cuba, according to a senior administration official, and also provided information that led to the prosecution to the Cuban Five.

The “intelligence asset” was not identified and government officials said they would not do so.

As part of the resuming diplomatic relations with Cuba, the U.S. will soon reopen an embassy in the capital of Havana and carry out high-level exchanges and visits between the governments. The U.S. is also easing travel bans to Cuba, including for family visits, official U.S. government business, educational activities, journalistic activity, public performances, humanitarian activities, and professional research activite, through tourist travel remains banned. Those traveling to Cuba will be able to bring up to 400 dollars of consumer goods back into the United States and 100 dollars worth of Alcohol and tobacco products, including Cuban Cigars, as long as goods are for personal consumption and not resold in the U.S.

The U.S. is also increasing the amount of money Americans can send to Cubans from $500 to $2,000 per quarter, or every three months. Early in his presidency, Obama allowed unlimited family visits by Cuban-Americans and removed a $1,200 annual cap on remittances.

Under new changes, Americans will be able to use credit and debit cards in Cuba, and U.S. financial institutions will not be able to work alongside Cuban banking insititions. The new changes will also ease trade for telecommunications and agricultural products in an effort to boost internet access and commerce in Cuba. Easing trade restrictions will specifically apply to goods used by private sector entreprenours in Cuba like restaurants, barber shops, and small businesses, as well as, agricultural equipment.

Senior US administration officials said President Obama is doing as much as he can within the boundaries of the law and would like to see the Cuban embargo ultimately lifted by Congress. It is the administration’s belief that the embargo is not working and that these diplomatic changes will create greater momentum for legislation in Congress to pass that will ultimately end the embargo.

Includes reporting from The Associated Press.