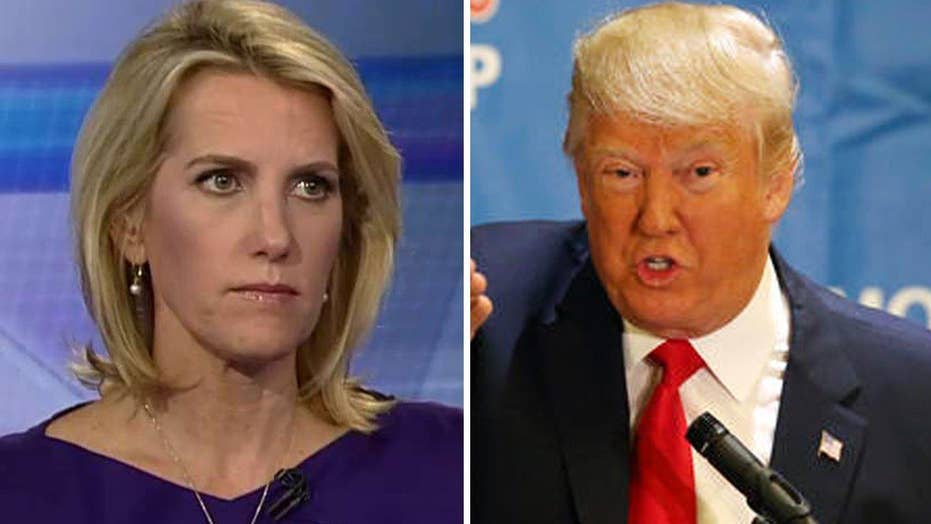 Ingraham on Trump's 'back to the future' Clinton strategy

Presumptive GOP nominee amps up attacks on Hillary Clinton by focusing on husband Bill's affair with Monica Lewinsky and his impeachment, calling his rival an 'enabler.' Will that help 'The Donald' with women voters? Laura Ingraham goes 'On the Record'

Trump, the presumptive GOP presidential nominee, said Saturday at a rally in Spokane, Wash., that Clinton’s husband, former President Bill Clinton, “was the worst abuser of women in the history of politics."

To be sure, winning women voters will be key to winning the general election.

More than half of all voters in the 2012 presidential race were women, and at least 53 percent of them voted for President Obama over GOP nominee Mitt Romney, according to exit polls.

Trump's attacks Saturday appeared to be in response to reports that Priorities USA, the lead super PAC backing Clinton, has reserved $91 million in TV advertising, which will start next month and in part focus on Trump’s statements and actions regarding women.

“Two can play that game," said Trump, in a likely preview of a bruising and personal general election battle.

Trump’s run for the nomination perhaps suffered its biggest setback when he retweeted an unflattering picture of the wife of primary rival Texas Sen. Ted Cruz -- a move he later said he regretted.

Amid criticism about his treatment of women, the billionaire businessman also has touted a history of hiring women to top jobs in his real estate and entrepreneurial empire.

At a later rally Saturday, in Lynden, Wash., Trump repeated that former President Clinton’s denial of a relationship with a White House intern later lead to his impeachment.

"Do you remember the famous, 'I did not have sex with that woman?' " Trump asked. "And then a couple of months later, 'I'm guilty.' And [Hillary Clinton] is taking negative ads on me."

Trump also sought to downplay past comments about women in venues like the Howard Stern radio show in the days before he was a politician.

He said some were made in the name of entertainment, while others, like his criticism of actress and talk show host Rosie O'Donnell, were warranted.

"Who the hell wouldn't speak badly about Rosie O'Donnell? She's terrible," he said.

Clinton told CNN on Wednesday, after Trump became the GOP’s presumptive nominee, that she felt certain that Americans won’t take a chance on electing a "loose cannon" like him.

And she appeared to warn Trump that others have tried and failed to defeat her politically with similar personal attacks.

"If he wants to go back to the playbook of the 1990s, if he wants to follow in the footsteps of those who have tried to knock me down and take me out of the political arena, I'm more than happy to have him do that," she said.