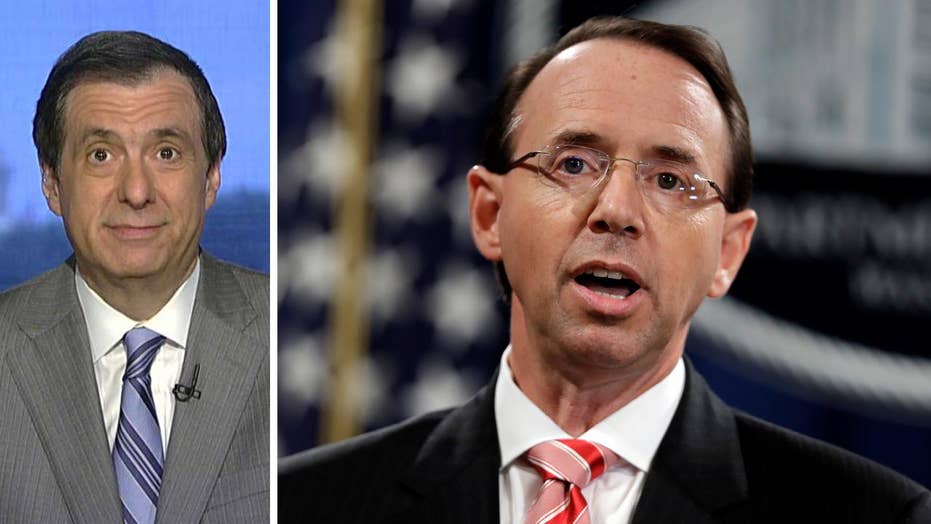 'MediaBuzz' host Howard Kurtz weighs in on the seemingly pointless Beltway theater behind the resolution to impeach Rod Rosenstein, and a lawsuit involving the Trump hotel a few blocks down from the White House.

One of the things that drives people crazy about Washington is all the pointless theater.

All politics involves a bit of showmanship, especially these days, but when things are done just for show, it's so much hot air.

For all the talk about fiscal responsibility, for instance, no one in this capital much cares that we're about to rack up nearly $1 trillion in additional debt over the next decade, courtesy of the Trump tax cuts for corporations, according to new figures. The Republicans used to be the party of balanced budgets, but that's out the window. The Democrats once bragged of balancing the budget during the Clinton era, but now mainly use it as an argument when the GOP is in power, and vice versa.

Deficits are not a major voting issue, the thinking goes, so both sides just yak about it while busting past limits on the national credit card.

A dozen conservative House members have now introduced a resolution to impeach Rod Rosenstein. He's not going to be impeached, of course, so it's just more theater.

In fact, Paul Ryan much ruled it out for a vote yesterday, but it remains "on the table."

Mark Meadows and Jim Jordan, among others, say the deputy attorney general is slow-walking all kinds of House document requests. The Justice Department has turned over a small mountain of documents, but some disagreements exist.

I've covered many congressional subpoena battles over the years, and sometimes they lead to contempt-of-Congress citations. (These usually are voided when the inevitable compromise is reached.) But I can't think of a case that led to a serious impeachment effort.

So even if the lawmakers' frustration with Rosenstein is justified, the resolution seems more like a public protest of his role in overseeing the Mueller investigation.

Jeff Sessions said yesterday that "my deputy, Rod Rosenstein, is highly capable. I have the highest confidence in him."

And by the way, President Trump could fire Rosenstein today (except there would be an enormous political backlash). That's why the impeachment effort isn't serious, and Meadows said yesterday he is dropping it for now.

The final bit of theater centers on a lawsuit involving the Trump hotel a few blocks down Pennsylvania Avenue. It's getting some press because a federal judge allowed the suit, filed by Maryland and D.C., to move forward.

Invoking the obscure "emoluments" clause of the Constitution, the suit argues that the president is unfairly profiting from the five-star hotel because foreign dignitaries and others seeking favor with the administration are staying there. (The hotel was already in the works when Trump declared his candidacy, and I remember him holding a campaign news conference there when it was still under construction.)

The two jurisdictions claim other hotels are being hurt, but I think the suit is all about Trump. And in the unlikely event he had to sell the hotel, he'd still make money.

Even more of a politically motivated stretch: A D.C. advisory neighborhood commission is trying to get the hotel's liquor license revoked on grounds that Trump lacks the required "moral character." And it's not even the advisory committee for that neighborhood!

So all of this makes for good kabuki, a cheap way of getting headlines, and creating the appearance of action. But the deficits aren't shrinking, Rosenstein isn't going anywhere, and the Trump International Hotel will probably be serving guests for a long time to come.