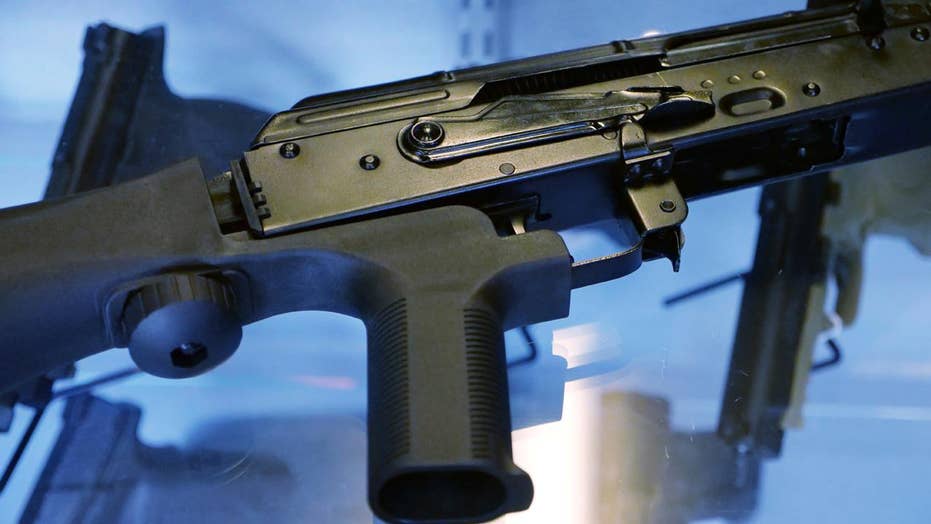 Rep. Meadows: You will see some real legislation on guns

Rep. Mark Meadows (R-N.C.) on the debate over gun control.

It was a typical retreat to the usual positions after the Parkland, Florida, school massacre.

Most GOP lawmakers said little besides offering condolences. Many Republicans veered away from the now-pasteurized “thoughts and prayers” bromide that once punctuated mass shootings. The National Rifle Association laid low at first.

Then after a requisite blackout period, the gun-rights group returned to the oft-used script, which blamed the media and Democrats for the melee, criticized efforts to curb the availability of weapons and spoke of how more firepower could prevent future bloodbaths.

Twitter bots and conspiracy theorists attacked those who survived the shooting, accusing some who surfaced in media as “crisis actors.”

They argued that Parkland was yet another false flag -- an effort engineered by the “deep state” as part of “Operation Mockingbird” to manipulate public opinion, propagandize gun violence and prompt the mass confiscation of weapons.

A similar stage play ensues after each mass shooting. Everyone has their roles. There’s no rehearsing. This has happened so many times that everyone says and does essentially the same thing.

It’s gone on for so long that some of the main players long ago exited the stage. The scene between Charlton Heston and Michael Moore in “Bowling for Columbine” is but a distant memory.

Some have been involved in drama for decades. Consider California Democratic Sen. Dianne Feinstein, who became mayor of San Francisco after she came upon the bodies of deceased Mayor George Moscone and San Francisco Supervisor Harvey Milk after their 1978 assassinations at city hall.

All characters in this drama may be “crisis actors” of another sort until something changes to halt the chaos in this never-ending macabre theatre. There’s a crisis. Everyone acts. Nothing happens.

Look those up sometime.

So Congress returns to session Monday after a week-long recess. We’ll see if there are any new lines added to the gunplay canon.

“Bump stocks” entered the vernacular after Las Vegas. There’s been a tug of war since last fall between Congress and the Bureau of Alcohol, Tobacco and Firearms over who has jurisdiction to regulate and ban bump stocks, attachments that enables a semi-automatic rifle to fire more quickly.

There was lots of chatter about Congress addressing bump stocks following the massacre at the Route 91 Harvest Festival on the Vegas Strip. But it’s now late-February.

That conversation never fully gelled. However, talk about Congress acting on bump stocks is now back in the conversation after what went down at Marjory Stoneman Douglas High School in Florida -- which didn’t involve a bump stock.

There will certainly be a debate offstage when Congress returns to work in the coming days. But little will unfold on the House and Senate floors.

The House plans to meet on just Monday and Tuesday, cancelling other activity so evangelist Billy Graham may lay in honor in the U.S. Capitol Rotunda.

A fight over DACA, border security, a wall and immigration could eclipse the gun conversation and potentially commandeer floor time in March. President Trump on March 5 formally sunset the Obama administration’s DACA program, that protects some younger illegal immigrants from deportation.

However, that deadline is up in the air due to pending court cases. And despite a bipartisan, two-year, broad spending agreement, the government is set to run out of money on March 23.

A failure to address DACA and the president’s spending request for a border wall is the flashpoint in the next round of negotiations -- again -- because much like the gun debate, nothing is settled on that score, either.

What parliamentary options do Democrats have to pry loose action on guns? The gun sit-in led by Democratic Reps. John Lewis, Georgia, and John Larson, Conn., certainly garnered a lot of attention in the summer of 2016.

And yet here we are. Connecticut Democratic Sen. Chris Murphy’s nearly 15-hour speech on the chamber floor a week later certainly galvanized activists on the left.

The Senate observed the seemingly-perfunctory “moment of silence” the day after the Parkland shooting. The House appeared poised to do the same. House Speaker Paul Ryan, R-Wis., even announced that intention at his weekly press conference.

Initially, the House considered holding the moment of silence vigil a week ago Thursday during its final vote sequence, just before lawmakers scattered from Washington on recess.

But a number of factors postponed the Parkland moment of silence. U.S. Capitol Police dragged out of the chamber dozens of demonstrators who erupted in chants, protesting against changes to the Americans with Disabilities Act.

There was confusion as to how many votes the House may take in that series. The House typically designates the moment of silence ritual to fall between the first and second roll call vote. That way, all members are on hand to take part and aren’t running in to make the vote or bolting out the door on the next. Third, Rep. Ted Deutch, D-Fla., who represents Parkland, wasn’t in Washington. Instead, Deutch was in Florida meeting with constituents after the shooting.

A leadership source said the House would wait to hold the moment of silence until Deutch returned to Washington following the recess.

However, something did happen amid the moment of silence confusion last week. Rep. Mike Thompson, D-Calif., who leads the Democrats’ task force on combatting gun violence, stood by the leadership table on the floor and sought recognition just after the votes ended. Thompson posed a “parliamentary inquiry” to the chair, asking when members may consider gun legislation.

The House ruled Thompson’s interrogative out of order.

The Parkland moment of silence is expected in the coming days. It’s unclear if the House or Senate does much more than that on guns in the near future.

Little changes. The crisis continues. And everyone is reduced to stage actors, uttering the same lines again.