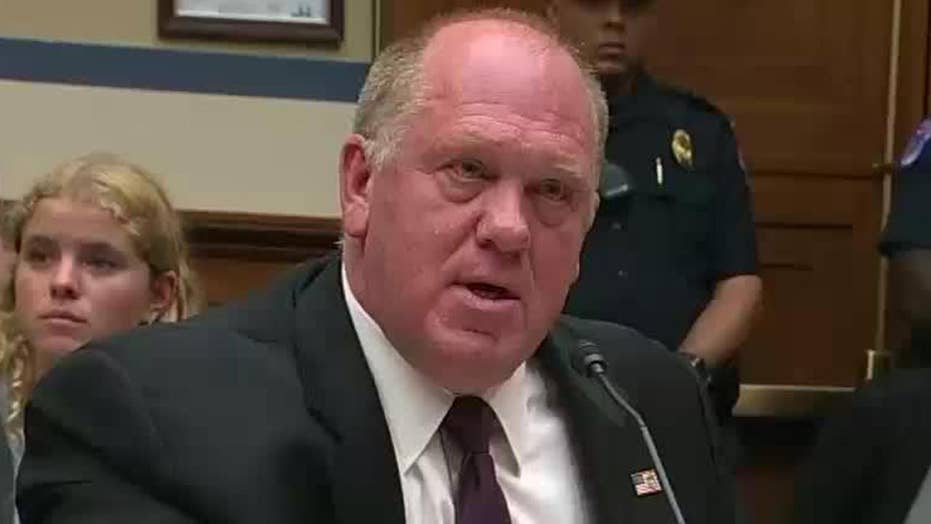 Rep. Jesus Garcia and the former acting Immigration and Customs Enforcement (ICE) director, Thomas Homan, got into a testy exchange Friday during a House hearing. In it, Garcia, the Illinois Democrat, asked the ex-ICE chief if he didn't care about migrant children under his watch "because the children don't look like children that are around you."

"Have you ever held a deceased child in your arms?" Garcia asked Homan.

"First of all, your comments are disgusting....and yes I have held a 5-year-old boy in my arms and said a prayer for him knowing what his last 30 minutes was like," Homan replied.

"For you to sit there and insult my integrity and my love for my country and for children ... that's why this whole thing needs to be fixed. And you're the member of Congress. Fix it," Homan added.

"We agree on that. But I also disagree with your characterization of immigrants as prone to criminality," Garcia responded before Chairman Elijah Cummings banged his gavel to restore order.

Several congressional Democrats have blasted the Trump administration and immigration officials over subpar conditions and alleged cruel treatment of migrants in detention facilities across the country. In one notable instance, Rep. Alexandria Ocasio-Cortez, D-N.Y., alleged that agents made migrants drink water from toilet bowls. And she compared detention facilities to concentration camps.

For their part, Republicans have brushed those claims aside, saying the toilets have attached sinks and drinking water.

Much of Friday's hearing focused on the treatment of the migrants who've been crossing the U.S.-Mexico border by the tens of thousands each month. Republicans members of the panel chided their Democratic colleagues for downplaying what they called a crisis at the southern border.

Homan pushed back on some of the rhetoric being used by lawmakers, saying agents have been publicly vilified.

“The same people that vilify [the] Border Patrol for detention conditions are the same people that refuse to answer the call for help until it’s too late,” he said, apparently referring to Democrats who refused to back a bill increasing humanitarian funding by $4.5 billion to the border.

A recent report by government inspectors found overcrowding and inadequate conditions across five detention facilities in Texas. The report documented migrants sleeping on floors, being detained for too long and contending with the lack of a change of clothes.

Freshman Rep. Rashida Tlaib, D-Mich, broke into tears while recalling what she saw at the border. She criticized those that use the term "illegal immigrant."

“No one is illegal," she insisted. "That term is derogatory because it dehumanizes people. You can say any other forms of coming in without regulations or so forth, but the use of "illegal" is disrespectful, and I ask my colleagues to try in so many ways not to dehumanize our immigrant neighbors who are trying to come in for a safe haven.”