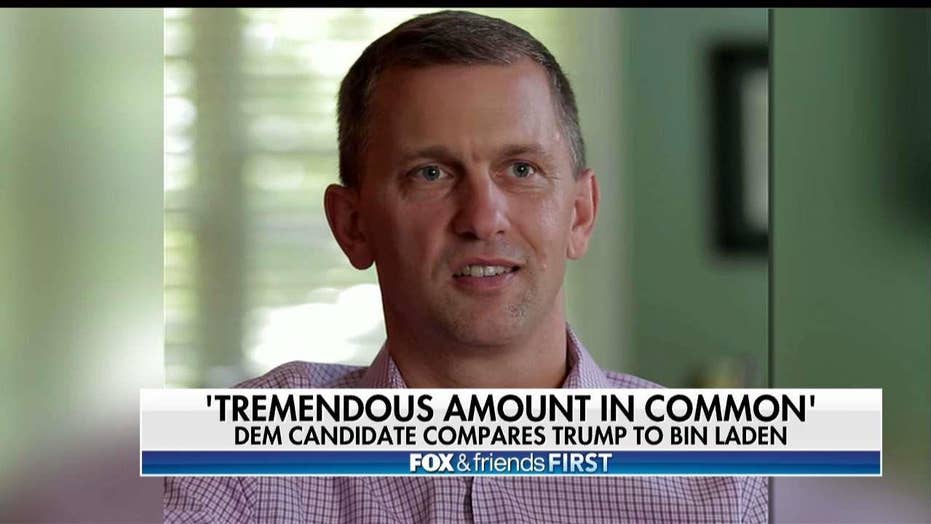 Democratic Congressional Candidate: Trump and Bin Laden 'Have a Tremendous Amount in Common'

An Illinois congressional hopeful is backtracking after he said President Trump had a “tremendous amount in common” with Usama bin Laden.

“I don’t mean to sound overly, I don’t know, hyperbolic on this,” Sean Casten, a Democrat, originally said in a recording obtained by the Washington Free Beacon. “Trump and Usama bin Laden have a tremendous amount in common because they have both figured out how to use the bully pulpit to activate marginalized young men.”

“Every demagogue has done this, right – find a group of angry people and give them something to be angry at,” Casten continued.

Casten won the Democratic primary in March and will face incumbent Rep. Peter Roskam in November. Roskam, a Republican, has represented Illinois’ 6th congressional district since 2007.

“Sean Casten has called Republicans pedophiles, likened abortion to gallbladder surgery and called Republican Party donors ‘a bunch of morons,’” she said in a statement to the Chicago Sun-Times. “Our communities need a solutions-oriented Representative who can bring people together to get things done.”

In a 2017 tweet that Roskam’s campaign has claims has since been deleted, Casten shared an article about the Republican National Committee’s support for beleaguered Senate candidate Roy Moore and said, “It’s now officially the Pedophile Party. Every single GOP incumbent owns this now.”

And in a July debate, Casten compared abortions to a “medical procedure like a gall bladder surgery,” the Chicago Sun-Times reported.

“Even prior to being elected, Donald Trump’s politics of disparagement and division have been straining the bonds that hold our diverse nation together. And Sean believes that Donald Trump has gone out of his way to divide Americans for his own personal gain rather than bringing us together,” the campaign said in a statement to WGN-TV.

ILLINOIS GOVERNOR RACE PITS BRUCE RAUNER AGAINST JB PRITZKER: WHAT TO KNOW ABOUT THE ELECTION

The comparison between Trump and bin Laden, the founder of al Qaeda and mastermind behind the deadly Sept. 11 terrorist attack, came during a conversation with a woman at an event in Wheaton, Illinois, who said her child was afraid to go to school because of recent mass shootings, the Free Beacon reported.