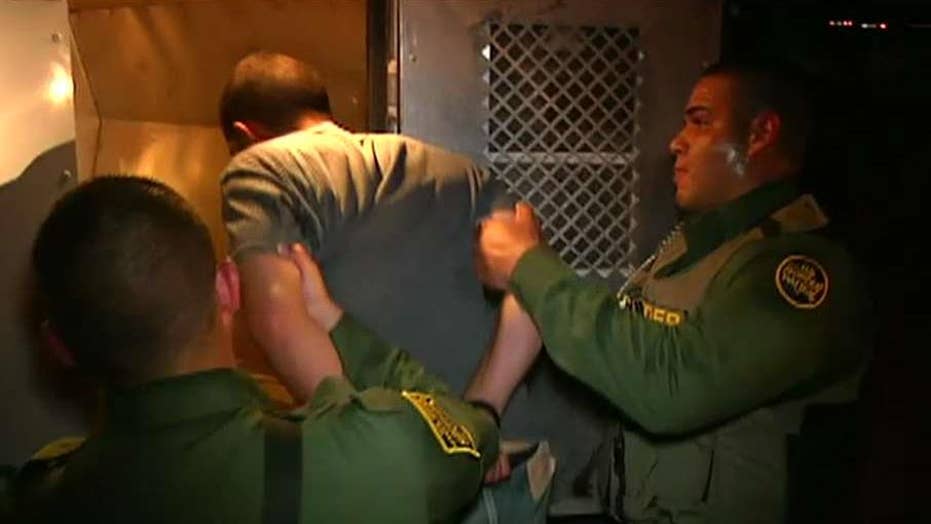 Border Patrol: Surge in illegal immigrants ahead of election

Americans aren’t the only ones motivated by Tuesday’s election. The presidential race has immigrants from around the world racing to the U.S.-Mexican border, as the cartels exploit a powerful narrative: get into the U.S. while you still can.

“Smugglers are telling them that they need to come across now while there’s a chance,” said Art Del Cueto, a Border Patrol agent in Tucson, Ariz., whose views were echoed by another agent in Texas.

“People think if one candidate wins, certain things will happen, like a giant wall being built and then they can never get through,” said Chris Cabrera, an agent in the Rio Grande Valley. “Another faction believes that if the other candidate wins, they’ll get amnesty if they’re here by a certain date.”

Those two competing narratives – triggered by the rhetoric of Donald Trump and Hillary Clinton, respectively -- are driving immigration numbers the Border Patrol hasn’t seen in years in some sectors.

“We are overwhelmed,” said a veteran agent in McAllen, Texas. “We are seeing 800 to 1,000 apprehensions every night.”

In fiscal 2016, the Border Patrol apprehended 117,200 immigrants from Central America, almost one-third of all apprehensions border-wide -- and 5,000 more than during the so-called surge of 2014. The agency also apprehended 5,000 Haitians, up from just 700 last year. The number of immigrants claiming to be from Africa and Asia also is up.

"There are always going to be push and pull factors that influence an individual’s decision to make that trek," said Tucson Border Patrol Sector Chief Paul Beeson.

The poverty and violence plaguing many of these countries helps push immigrants north, Beeson said. Pull factors include available and good-paying jobs in the U.S. and immigration policy that provides work permits and freedom for immigrants while the courts adjudicate their ‘asylum’ claim.

“When you stop somebody, you ask their name and the first thing they tell you is – ‘I’m here for asylum, I can’t go home because they’ll kill me.’ … When it takes a good five or six minutes just to get their name out of them, they have a rehearsed story,” said Cabrera. “Once they get those papers saying they can pass through our checkpoint, we’ll never see them again.”

Del Cueto said the agents are “not getting any backing” from D.C. and “we need to start enforcing every single immigration law we have on the books.”

Del Cueto and Cabrera belong to the National Border Patrol Council, which represents the Border Patrol’s 18,000 field agents who are prohibited from talking openly to the media.

While Central American immigrants have posed the biggest resource challenge for Texas, they say a surge of Haitians are pouring into ports of entry in California and Arizona.

Last year, the U.S. saw a 500 percent increase of Haitians admitted to the U.S., double that in San Diego where right now 2,000 are waiting outside the port in San Ysidro. According to Homeland Security sources, another 2,000 are in Mexicali and several hundred are in San Luis, just south of Yuma where Del Cueto says immigrants are sleeping in a church parking lot. Further east in Nogales, Mexico, 150 are waiting to cross into the U.S. They are camped next to the border fence, waiting for Customs and Border Protection officers to process them as refugees.

Some had jewelry and one woman had an iPad. The men surrounded the women, who huddled around a pile of boxes containing water and food.

“We’ve been in Nogales 20 days,” said one middle-aged man in a striped shirt in broken English. “We need help crossing the border.”

He said each immigrant paid a $4,000 to $6,000 smuggling fee. Once here, he said the Mexican government had given each a number based on their arrival.

“We are seeing an uptick in the number of Haitians that are looking for an immigration benefit,” said Beeson, who admits the surge is taking agents off the front lines.

Following the earthquake several years ago, Haitians were allowed to immigrate and stay in the U.S. under a program known as ’Temporary Protected Status.’ Earlier this year, the U.S. ended that protection, leaving some Haitians in the pipeline traveling through Mexico, where according to officials there, roughly 8,000 are on their way to the border.

While Trump and Clinton have very different visions of immigration reform and border security, Stratfor’s Scott Stewart doesn’t see the border threat changing until conditions do south of the border.

“There’s really no easy answer to it because there are just deeper issues,” said Stewart, from the defense and security think tank. “You have pervasive corruption where you see all levels of government are involved in, you know, drug dealing and other criminal activity. … So these things all tie together and make it a very difficult place for people to live and survive and because of that it’s very understandable why people would want to migrate from those conditions up to the United States.”