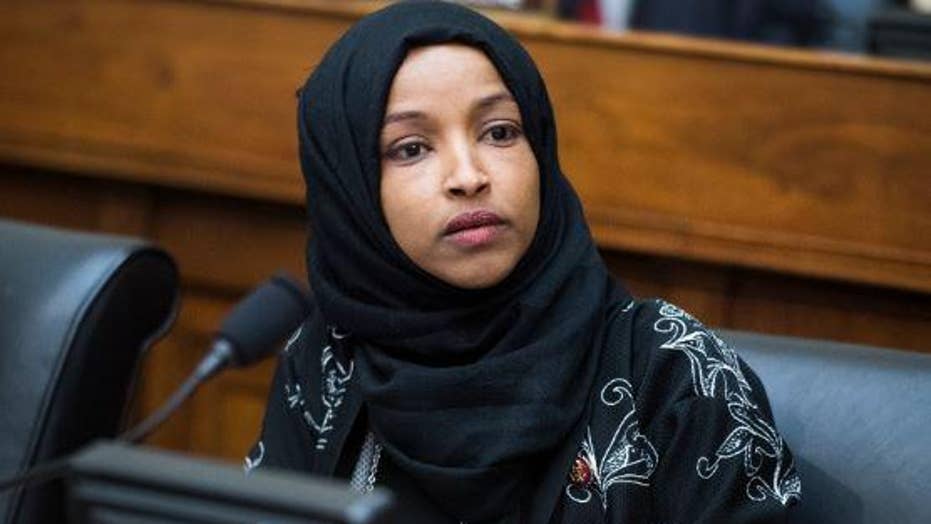 Rep. Ilhan Omar (D-MN) is under fire for previously attending a travel delegation sponsored by 'Witness for Peace'

Minnesota Democrat Ilhan Omar said she does not recognize Venezuelan opposition leader Juan Guaido as the interim Venezuelan president, defying consensus among Western leaders and her own party.

The Democrat refused to endorse Guaido and even came out against the opposition leader in an interview published on Thursday, where she went on float the far-left conspiracy theory that the U.S. government is sending humanitarian aid to Venezuela “in the guise of eventually invading this country.”

“Well the constitution of Venezuela says that there needs to be an election called within 30 days and we’re waiting for that to happen,” Omar said during an interview with the Intercept.

“What we should be involved in is having diplomatic conversations and bringing people to the table and being a partner in facilitating that. But we are threatening, we are threatening intervention. We’re sending humanitarian aid that is in the guise of, you know, eventually invading this country and the people of the country don’t want us there,” she added.

The host of the podcast then asked whether Omar shares the view of her fellow Democrats and Western governments that Guaido is the current leader of the country.

Omar has been facing criticism over her resistance to the U.S. support for Guaido and opposition to the socialist regime of Nicolás Maduro, whose government is on the verge of collapse due to public and international pressure.

Earlier this year, she accused President Trump of backing a “coup” in Venezuela, despite the international community’s agreement that Maduro won a sham election.

TRUMP'S VENEZUELA ENVOY CLASHES WITH ILHAN OMAR AT HEARING: 'THAT IS A RIDICULOUS QUESTION'

“A US-backed coup in Venezuela is not a solution to the dire issues they face,” Omar tweeted. “Trump’s efforts to install a far-right opposition will only incite violence and further destabilize the region. We Must support Mexico, Uruguay, & the Vatican’s efforts to facilitate a peaceful dialogue.”

Guaido has been recognized as the current leader of the country by most major European nations, including the U.K., Germany and France. The U.S. was among the first countries to throw the support behind the new leader.

Last month, Omar clashed with Elliott Abrams, the Trump administration's new special envoy for Venezuela, attacking him for his involvement in Latin America and asked whether he supports “genocide.”