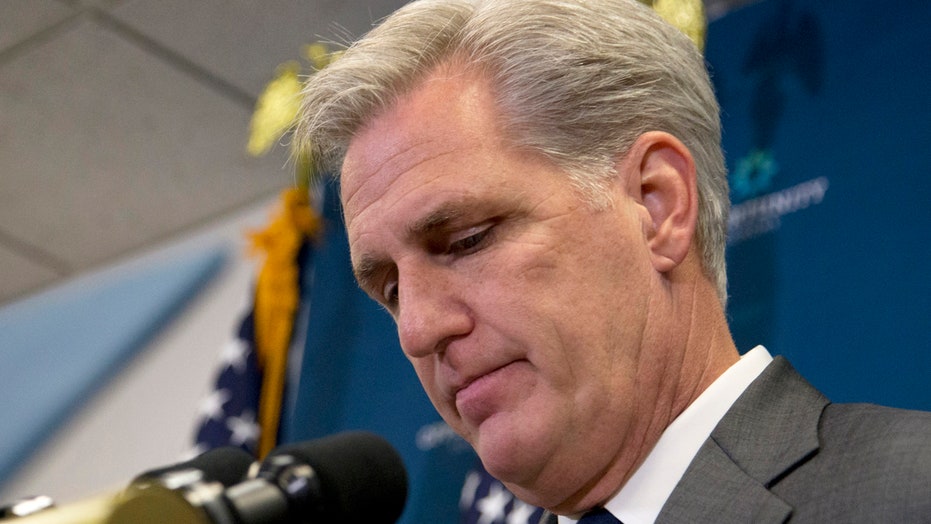 Kevin McCarthy drops out of race for House speaker

House Majority Leader Kevin McCarthy's stunning decision Thursday to withdraw from the race for speaker leaves Republicans scrambling to find that elusive candidate who can unite the divided conference and actually win a majority on the floor.

The California Republican's abrupt withdrawal is a testament to how undesirable John Boehner's job really is. As GOP leader, McCarthy immediately was deemed the front-runner and was thought to have more than enough support to win the party nomination in a vote originally set for Thursday afternoon.

Now, it's unclear whether more candidates will enter the race or whether the field will stand as is, with Rep. Jason Chaffetz, R-Utah, and Rep. Daniel Webster, R-Fla., vying for the job.

Thursday night, Rep. Lynn Westmoreland, R-Ga., told Fox News he was putting himself out as a speaker candidate but "I'd like to tell my wife first."

Further adding to the turmoil, Fox News has confirmed Boehner personally tried to recruit Rep. Paul Ryan, R-Wisc, chairman of the House Ways and Means Committee, to run for speaker.

There was no immediate response from Ryan, but in a 2011 statement explaining why he wouldn't challenge Boehner for minority leader, he said, "my first priority in life will always be my wife and my three young children."

Earlier Ryan, the party's vice presidential nominee in 2012,  put out a statement saying he would not run for speaker and he was "disappointed" McCarthy dropped out.

While the House sorts it out, Boehner says he intends to stay on as speaker until a successor is chosen, though he had planned to resign at the end of the month. "I will serve as Speaker until the House votes to elect a new Speaker. We will announce the date for this election at a later date, and I'm confident we will elect a new Speaker in the coming weeks," Boehner said in a statement.

Fox News is told that absent a new speaker, Boehner also would be prepared to stay on for the rest of the Congress and steer legislation that is pending.

McCarthy's former rivals remain in the contest, though. Webster told Fox News on Thursday he still thinks he can "bridge that gap" in the conference.

The conservative wing of the party indeed was gravitating toward Webster in the run-up to Thursday's meeting, and some lawmakers suggest he'll get a boost out of McCarthy's withdrawal.

But Chaffetz said he, too, is staying in the race. "I really do believe it is time for a fresh start. That was the whole genesis of my campaign," he said.

Other candidates could enter in the coming weeks.

Speculation immediately will center on Republicans who had put their names forward for other leadership posts. While McCarthy says he's now staying on as majority leader, it was a job Reps. Steve Scalise, R-La., and Tom Price, R-Ga., had been planning to run for.

Scalise was mum Thursday afternoon on whether he'd run for speaker now that McCarthy is out.

Price put out a statement backing the idea of a caretaker speaker who can lead through the 2016 election, without stating his own intentions.

"Now is the time for our members to come together and have an honest conversation about how we unify our Conference," he said. "The best course would be for us to select a candidate for Speaker who will serve in that capacity for the next 15 months. This would allow the House to complete the business in a responsible manner, providing ample time for everyone's voices to be heard, leading into full leadership elections in November of 2016."

Other candidates initially thought to be in the mix for majority leader, for a short time, were Rep. Trey Gowdy, R-S.C., and Republican Conference Chairwoman Cathy McMorris Rodgers, R-Wash. Both opted not to run, but it's unclear whether they might now consider the speaker race.

Names that have been floated for a "caretaker" speaker also include Reps. Hal Rogers, R-Ky., and John Kline, R-Minn.

Practically speaking, Republicans' overriding interest is to find a candidate who can muster an absolute majority on the House floor in a full chamber vote, originally set for Oct. 29. While McCarthy was likely to easily win the nomination, it was unclear whether he could muster a majority -- of roughly 218 members -- once lawmakers from both parties vote for speaker.

For his part, McCarthy said he thinks the party needs a "fresh face."

"If we are going to unite and be strong, we need a new face to help do that," McCarthy said. "We've got to be 100 percent united."

Democrats put the onus on Republicans to sort out the confusion after McCarthy's withdrawal.

"It's up to House Republicans to choose the next Speaker," Drew Hammill, spokesman for House Democratic Leader Nancy Pelosi, said in a statement.