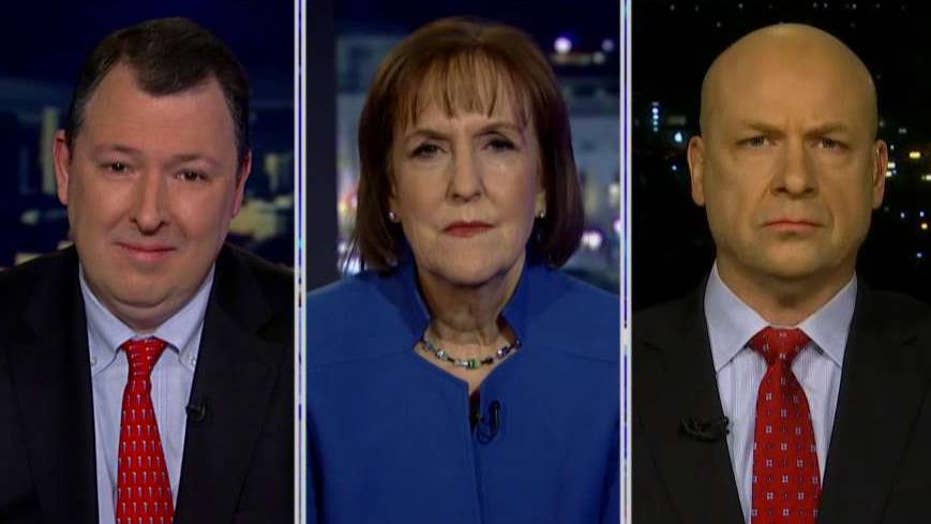 President Trump defends decision to withdraw US troops from Syria, signals support for US mission in Iraq

Despite President Trump’s own declaration early on that he’d be “proud” to shut down the government over funding the U.S.-Mexico border wall, the political loser could end up being the Democrats, Washington Post syndicated columnist Marc Thiessen argued on Wednesday's "Special Report" All-Star panel.

It has almost been a week since the partial government shutdown began and it seems that neither the president nor congressional Democrats are backing down in this fight. The president told reporters Tuesday that he doesn’t know when the shutdown will end, saying the government won't be fully operating again “until we have a wall or fence --  whatever they’d like to call it.”

Thiessen told the panel that time was “on the president’s side” in his battle with Democrats, invoking remarks made by likely incoming House Speaker Nancy Pelosi, D-Calif., about how Trump’s wall was becoming a “beaded curtain” and a “sign that Democrats are not negotiating and that they’re not taking it seriously.”

He compared that to federal Budget Director Mick Mulvaney’s recent counteroffer of a reported $2.1 billion for the wall instead of the $5 billion that was initially promised.

“So the president is trying to compromise and come to an agreement and the Democrats are making snarky jokes and thinking they have him on the run and not engaging. For the short term, he owns the shutdown because he claimed the mantle of the shutdown. He said ‘I want to shut down the government over border security.’ But over time, if he seems to be the one -- Americans want compromise on this --  if he’s the one that’s compromising and the Democrats are demanding absolute surrender, then it’s gonna backfire on them because that’s not what the American people want!” Thiessen said. “And over time, as he keeps making -- if he can be responsible and keep making concrete offers that are concessions to the Democrats -- then over time, they will start to own the mantle of the shutdown. So I think he’s right to stick to his guns and be reasonable and make reasonable offers.”

Tumulty dismissed those who say that the partial government shutdown is “no big deal,” reminding the panel that government workers who “live paycheck to paycheck” are still affected by the shutdown.

Meanwhile, Bevan determined that it’s only the “first quarter” in this battle over border funding and that things are going to get “ratcheted up” in the new year. He also told the panel that we’ll find out next week if Thiessen’s prediction was right.

“Democrats are going to come back, Nancy Pelosi is going to put a bill in the House on January 3 to reopen the government, and then they’re going to put the pressure on Trump, ‘Why won’t you sign this? Why won’t you do this?’” Bevan elaborated. “Now, there won’t be border funding in that and that’s when the fight is really going to heat up and we’re going to see who’s got the leverage and where the pressure points are and whether Marc’s scenario plays out where Trump can flip this on them and say ‘Listen, I’m negotiating in good faith. You guys aren’t negotiating at all. So now it’s your shutdown.’ But it is going to get serious in about a week.”