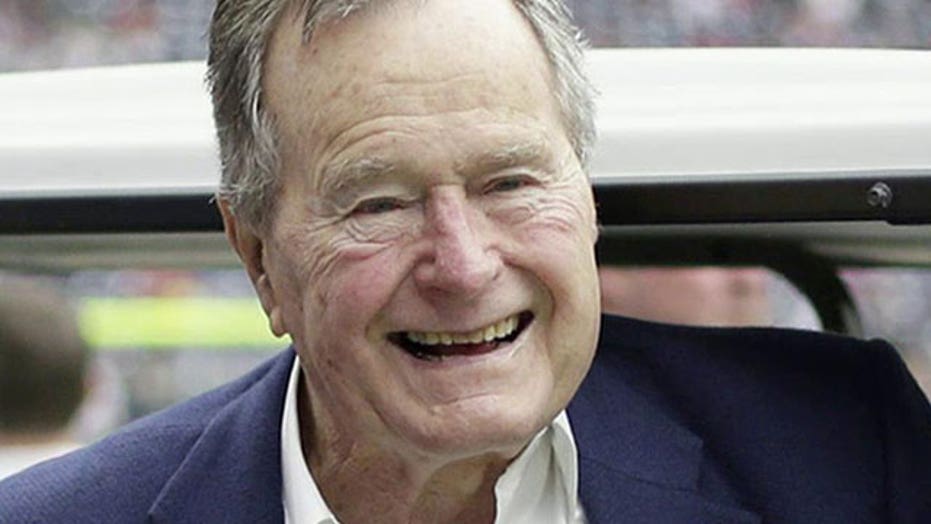 Bush in hospital after fall

Former President George H.W. Bush remained hospitalized in "fair" condition Thursday after breaking a bone in his neck in a fall at his Maine home but is not expected to need surgery, his office said.

In a statement, the former president's office said he fractured his C2 vertebrae, but the plan is to let the injury heal on its own, without surgery.

"The president never lost consciousness, and the injury he sustained neither impinged on his spine nor resulted in any neurological deficits. He continues to have normal use of his limbs," his office said, adding that they don't expect a "prolonged recovery period."

Spokesman Jim McGrath tweeted that the 41st president is fine, though he will need a neck brace.

Bush was being treated at Maine Medical Center in Portland, where a children's hospital is named for his wife, Barbara. The medical center confirmed his condition was stable but said it was premature to speculate about when he'll be released.

The doctor treating him also said patients Bush's age typically take three to four months to heal from such an injury. Dr. William D'Angelo said a news conference: "He's doing great, his spirits are good, and he's up and talking, and out of bed."

President Obama called the former president Thursday "to wish him a speedy recovery," according to the White House.

Bush, who celebrated his 91st birthday last month, is the oldest living former U.S. president. He was hospitalized in Houston for about a week this past December for precautionary treatment after experiencing shortness of breath. He said he was "grateful to the doctors and nurses for their superb care" after his treatment there.

In 2012, Bush spent nearly two months, including Christmas, at the same Houston hospital for treatment of a bronchitis-related cough and other issues. The former president also suffers from a form of Parkinson's disease that has forced him to rely on a motorized scooter to get around.

Despite his health issues, Bush kept a long-standing promise to make a parachute jump on his 90th birthday in June 2014. A former World War II naval aviator, Bush also skydived on his 80th and 85th birthdays.

The Kennebunkport, Maine home where Bush's fall took place is the former president's summer home. He and Barbara live in Houston during the winter.

Bush, the father of former President George W. Bush and 2016 GOP presidential candidate Jeb Bush, was elected president in 1988 following two terms as Ronald Reagan's vice president. After one term, highlighted by the success of the 1991 Gulf War, he lost to Democrat Bill Clinton amid voters' concerns about the economy. He had previously served as a U.S. Congressman, CIA Director and ambassador to China.