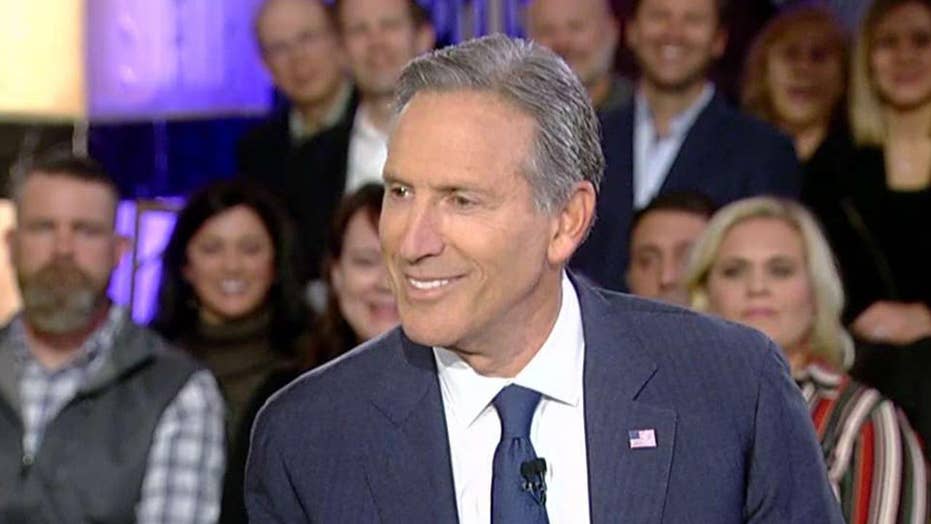 Howard Schultz: There's no room in American life to do anything that would disrespect women

Onetime Starbucks CEO Howard Schultz called allegations involving former Vice President Joe Biden’s behavior toward women “concerning.” At the same time, he seemed to raise some questions about the timing of those allegations.

Schultz, speaking at a Fox News town hall in Kansas City, Mo., discussed whether the recent claims of inappropriate behavior toward women disqualified Biden from seeking the presidency in 2020.

HOWARD SCHULTZ: CAN’T THINK OF 2 BUSINESSMEN MORE DIFFERENT THAN TRUMP AND MYSELF

“I think the voters have to decide whether or not he’s suitable" to run or be president, he said. “but there’s no room in American life to do anything that would disrespect women.”

When pressed further about a growing list of accusers -- three more women came forward with accusations on Thursday --  Schultz said he believed Biden’s behavior was “inconsistent with how to behave and how to respect woman and it’s concerning.”

But Schultz added that while he had no reason to question any of the women accusing the former vice president, he felt that the timing of the claims was “concerning.”

“Vice President Biden had served the county for 40 years, has been vice president for eight years. The only thing I would ask is one question: Why is this coming up now?”

He continued: “I’m not questioning the women on any level, but it's concerning to me that all of a sudden, on the eve of whether he was going to announce or not,  this is all of sudden coming up. It’s concerning.”

Biden posted a video on Wednesday to social media in which he acknowledged that his physical displays of affection and encouragement have made some uncomfortable. He also promised to be “much more mindful” of respecting personal space.