The House has passed a temporary funding measure to keep the government running. The bill is coupled with a tea party-backed measure to block President Obama's new health care law.

The 230 -189 vote sets the stage for a confrontation with the Democratic-led Senate. The Senate promises to strip the "defund Obamacare" provision from the bill next week and will challenge the House to pass it as a straightforward funding bill that Obama will sign.

The White House promises Obama would veto the measure in the unlikely event it reaches him.

At issue is the need to pass a short-term funding bill to prevent a partial government shutdown when the budget year ends on Sept. 30. Washington's longstanding budget stalemate has derailed the annual appropriations bills required to fund federal agency operations.

The top Senate Democrat, Majority Leader Harry Reid, has called the House vote a "waste of time." The White House has issued a veto threat.

The issue of health insurance is particularly critical to Latinos, nearly 31 percent of whom lack coverage, according to the Centers for Disease Control and Prevention.

The vote was something House leaders had tried to avoid because it initiates a fight that raises the possibility of a partial shutdown of the government when the fiscal year ends at midnight Sept. 30.

But an earlier plan by GOP leaders like House Speaker John Boehner, R-Ohio, designed to send a straightforward bill to keep the government running through Dec. 15 ran into too much opposition from tea party members who demanded a showdown over the Affordable Care Act, the official name of what Republicans branded Obamacare.

Boehner has sought to reassure the public and financial markets that Republicans have no interest in either a partial government shutdown when the budget year ends or a first-ever default on a broader set of U.S. obligations when the government runs out of borrowing ability by mid- to late October.

"Let me be very clear," Boehner said. "Republicans have no interest in defaulting on our debt — none."

GOP leaders want to skirt the shutdown confrontation and seek concessions when addressing the need to raise the debt ceiling next month, but Obama says he won't be forced into making concessions as he did in the 2011 debt crisis, when he accepted $2.1 trillion in spending cuts over 10 years.

Boehner accused Obama of being ready to negotiate with Russian President Vladimir Putin over Syria but not to engage with Republicans on increasing the nation's debt limit.

GOP leaders scheduled a meeting with the rank and file to discuss the debt limit measure. Aides said they plan to propose attaching provisions, including a mandate to permit construction of the Keystone XL oil pipeline, a framework to reform the loophole-cluttered U.S. tax code, limits on medical malpractice lawsuits and higher Medicare premiums for higher-income beneficiaries. Even with the grab bag of GOP chestnuts, some ardent conservatives are likely to balk at voting for any debt limit measure.

Meanwhile, a GOP family feud simmered. Many Republicans in both the House and the Senate see the "defund Obamacare" strategy as futile and faulted architects Sens. Ted Cruz, R-Texas, and Mike Lee, R-Utah, for whipping up expectations among tea partyers that the fight could be effectively waged.

A key part of the law, the opening of state insurance exchanges, is set to take effect Oct. 1, so the effort to gut the health care law has added urgency among conservative activists.

When Cruz suggested in a statement that the fight could not be won in the Senate, he infuriated House Republicans.

In fact, Senate Majority Reid would appear to have the upper hand and be able to use his 54-46 majority to strip the Obamacare provision out and punt the bill back to the House. But it'll take all next week, in all likelihood, to advance the measure through the Senate.

"I just see a big box canyon sitting out there," said Sen. Bob Corker, R-Tenn., using Western imagery to suggest that the defunding crusade is a dead-end strategy or perhaps even a scenario for a slaughter.

Republicans are worried that they'll take the blame for any shutdown. The party that picks a fight generally gets the blame if an impasse results.

"I'm one who doesn't believe that a shutdown does anything except divert attention from a president and his policies, which are rightfully unpopular, to congressional incompetence," said Sen. John Cornyn, R-Texas. "We've seen what happens when Republicans are divided; we basically cede power and influence on the outcome."

Some Democrats, especially in the House, dislike the underlying stopgap spending bill because its spending rate is consistent with the $986 billion level permitted this year after the imposition of the sequester — the automatic, across-the-board budget cuts mandated by Washington's longstanding gridlock over the budget.

But White House press secretary Jay Carney told reporters that Obama would indeed accept a stopgap spending bill at the GOP-sought level, which increases the likelihood that Democrats would eventually provide votes to help pass the measure over tea party opposition. The White House had previously ducked the question, so the step was seen on Capitol Hill as a signal to Democrats.

Republicans cautioned, however, that it is by no means assured that the House leaders like Boehner would simply surrender and schedule a vote if the Senate kicks back the bill. 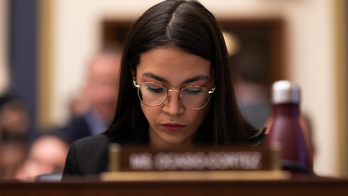