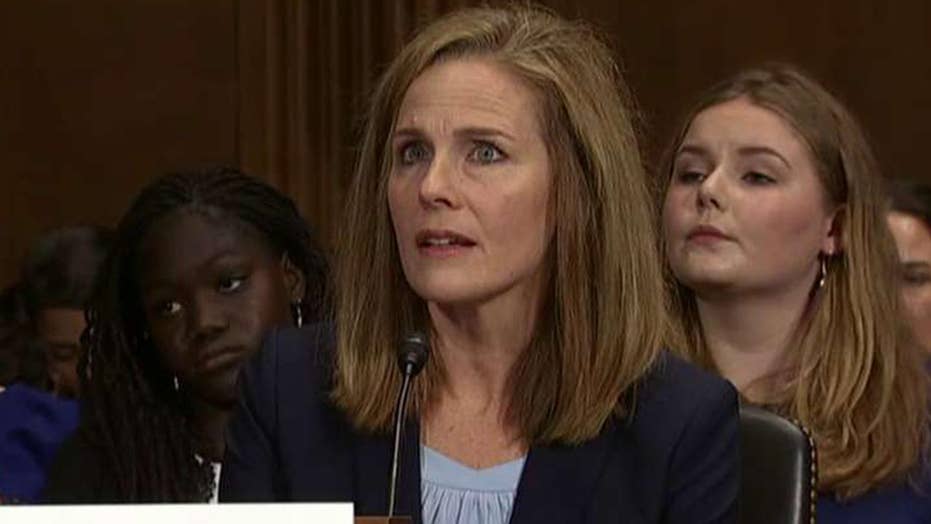 A look at Judge Amy Coney Barrett's thoughts from the bench

EXCLUSIVE: A number of House Republicans wrote to President Trump on Wednesday, urging him to nominate Amy Coney Barrett to fill the Supreme Court vacancy left by the death of Justice Ruth Bader Ginsburg last week.

“We write to you today to encourage you to nominate Judge Amy Coney Barrett to the Supreme Court of the United States,” the letter by Reps. Andy Biggs, R-Ariz.; Jim Banks, R-Ind.; Peter King, R-N.Y.; Jackie Walorski, R-Ind.; and Steve King, R-Iowa, said.

House GOP letter to Trump by Fox News on Scribd

“We are confident that Judge Barrett, if nominated and confirmed to the Supreme Court, will respect and defend the original text of the U.S. Constitution, as intended by America’s founding fathers,” the letter, obtained by Fox News, added. “Her presence and critical vote on our nation’s highest court will help restore the balance of the separation of powers between the executive, legislative, and judicial branches."

Barrett, a judge on the Seventh Circuit Court of Appeals, is believed to be one of the frontrunners to be Trump’s pick to fill the vacancy on the high court Trump met with Barrett on Monday, sources told Fox News. He is expected to announce his pick on Saturday.

As a pro-life Roman Catholic who clerked for late Justice Antonin Scalia, Barrett has strong conservative credentials and was reportedly considered by Trump to replace Justice Anthony Kennedy in 2018 -- but Trump eventually picked now-Justice Brett Kavanaugh

Should she get the nod from Trump, she is expected to face a fierce battle from Democrats in the Senate, who grilled Barrett on her religious faith when she was confirmed to the Seventh Circuit in 2017. 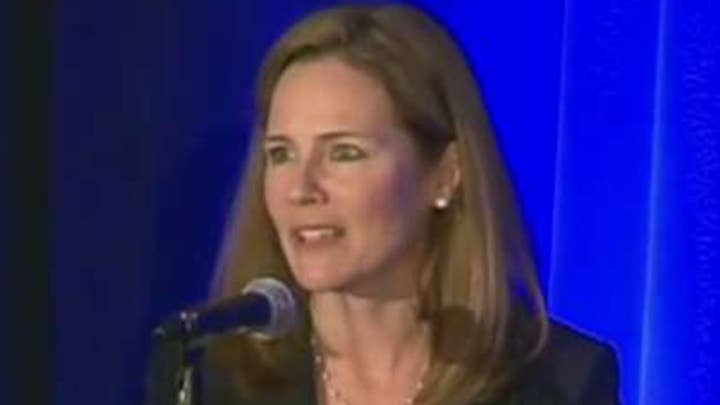 She told a 2006 Notre Dame law school graduating class, "Your legal career is but a means to an end, and ... that end is building the kingdom of God ... if you can keep in mind that your fundamental purpose in life is not to be a lawyer, but to know, love, and serve God, you truly will be a different kind of lawyer."

Barrett responded:  "If you're asking whether I take my Catholic faith seriously, I do, though I would stress that my personal church affiliation or my religious belief would not bear on the discharge of my duties as a judge.

The House lawmakers noted that Barrett was ultimately confirmed in a bipartisan vote in the Senate to the Seventh Circuit Court of Appeals. Before that she was a law professor in Notre Dame for 15 years.

“In the vetting process for this judgeship, both Judge Barrett’s colleagues and students at Notre Dame expressed great confidence in her abilities to carry out her duties on one of our nation’s highest courts,” they said.

The letter comes after Rep. Mike Johnson, R-La., in an op-ed for Fox News, backed Barrett and said he had recommended her to Trump as well.

“As I reminded President Trump most recently over the weekend, Amy should be considered a “female Scalia,” and the natural inheritor of his extraordinary legacy on the Court,” he wrote. “She clerked for him, studied constitutional law under him, and is cut out of the same mold. She is exactly what the president promised when he vowed to appoint ‘justices like Antonin Scalia.’”

On Monday, Trump said he had narrowed his choices down to at five potential nominees. While speaking with reporters, he mentioned Barbara Lagoa, a Cuban-American who serves on the 11th U.S. Circuit Court of Appeals.