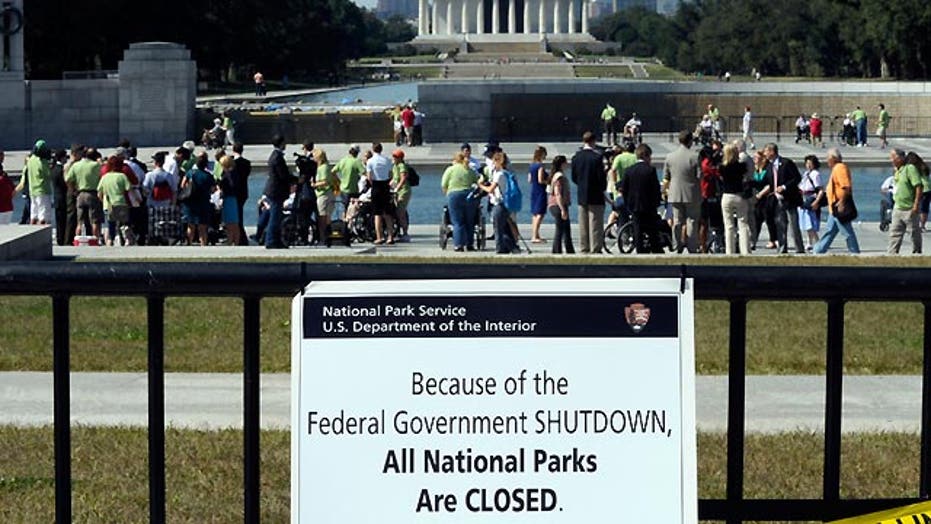 WWII vets refuse to be denied access to memorial in DC

America's bravest stand up to skimdown

House Republicans are investigating the decision to close off the World War II Memorial on the National Mall in Washington after veterans groups were initially denied access to the memorial in what has become a defining symbol of the government slimdown's impact.

Senior Republicans on the House Natural Resources Committee sent a letter Wednesday to National Park Service Director Jonathan Jarvis asking him to retain all documents related to the "arbitrary" closures of open-air monuments and parks in the nation's capital.

The committee is considering hearings to determine whether the Obama administration ordered the "outrageous" closures in an attempt to "make the current lapse in appropriations as conspicuous and painful to the public as possible," according to the letter from chairman Doc Hastings, R-Wash., and subcommittee chairman Rob Bishop, R-Utah.

"The Park Service’s decision to barricade the open-air memorials from veterans and other Americans flies in the face of common sense, given their interest in visiting memorials that honor their service and sacrifice to the country," the lawmakers wrote.

Frederick Hill, a spokesman for House Oversight Committee Chairman Darrell Issa, R-Calif., told National Review Online that his committee plans to explore whether decisions were made to close monuments and other national parks for political reasons.

Meanwhile, a new wave of veterans were forced to move barricades at the WWII Memorial in Washington Wednesday morning to gain access during the government slimdown, while the Republican National Committee offered to pay for guards to keep the site open.

The WWII veterans, from Ohio, Kansas and Missouri, arrived at the memorial one day after another group relied on the assistance from elected officials to move the barricades to allow access. Parks police did not prevent the first group from entering, nor did they interfere with Wednesday's group.

The veterans vowed to make the trek to D.C. regardless of the situation in Washington. When asked how they were going to visit the World War II Memorial when it’s closed, Ian Drake, a WWII veteran, told Fox4KC.com the group will "find a way in, one way or another. We might have to climb or something. It's no problem. Well work it out when we get there."

The veterans are traveling as part of Honor Flight , a program that enables World War II veterans to partake in an expense-paid trip to view the memorial.

RNC Chairman Reince Priebus went to the memorial Wednesday and said the committee would pay to keep five guards on duty to keep it open.

"The Obama administration has decided they want to make the government shutdown as painful as possible, even taking the unnecessary step of keeping the Greatest Generation away from a monument built in their honor," he said.

"We've already been working on a plan to open the memorial — and the entire government — after the GOP caused them to close," said DNC spokesman Mo Elleithee. "It's called a clean funding resolution, and it sounds like the votes are there if the Speaker would just call for a vote. It would save the economy a lot of money and get the memorial and government open a whole lot faster."

The National Park Service has received offers from states, localities and businesses to pay for or provide support to reopen parks, said Jennifer Mummart, a spokeswoman for the agency's National Capital Region.

"We have declined all of these offers because we are a national system operated by the National Park Service, which now, of course, lacks funds for daily operations," Mummart said. "So, while we truly appreciate the offers of support, they are not offers we can accept."

The park service already made provisions Wednesday to allow veterans groups into the memorial. A spokeswoman for the Honor Flight Network said told The Associated Press the organization is being granted access to conduct First Amendment activities at the memorial during the slimdown.