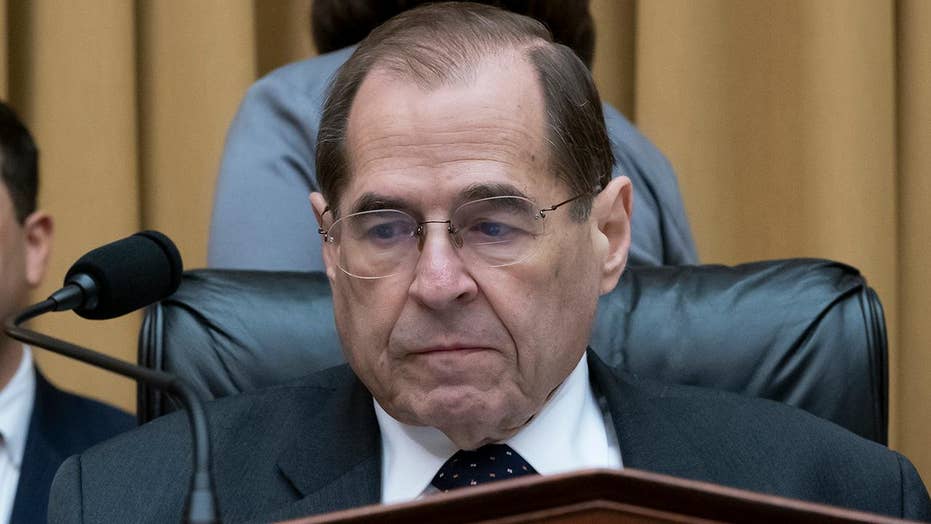 A new deadline imposed by House Judiciary Committee Chairman Jerry Nadler on the Mueller report has come and gone; Kevin Corke reports from the White House.

On the roster: House Dems to hold contempt vote on Barr Wednesday - Time Out: Move over four eyes - Biden focuses on Trump, not Republican Party - Bernie is playing to win - Just another day in Alaska

HOUSE DEMS TO HOLD CONTEMPT VOTE ON BARR WEDNESDAY
WaPo: “Democrats on the House Judiciary Committee said they will vote Wednesday on whether to hold Attorney General William P. Barr in contempt of Congress after Barr missed a deadline to produce a complete version of special counsel Robert S. Mueller III’s report. The panel had set a deadline of 9 a.m. Monday for Barr to provide the unredacted version of Mueller’s report on Russian interference in the 2016 election. It announced the planned vote in a statement Monday. ‘Although the Committee has attempted to engage in accommodations with Attorney General Barr for several months, it can no longer afford to delay, and must resort to contempt proceedings,’ reads the text of a contempt report released by Judiciary Committee Chairman Rep. Jerrold Nadler (D-N.Y.). … A contempt citation against Barr would set up a lengthy legal battle over the Mueller report, as Democrats take the matter to civil court.”

Mueller testimony tentatively set for May 15 - Fox News: “Rep. David Cicilline, D-R.I., said on Sunday that a tentative date of May 15 has been set for Special Counsel Robert Mueller to appear before the House Judiciary Committee and face questioning over his report on Russian interference in 2016 election. Speaking on ‘Fox News Sunday,’ the Rhode Island lawmaker said that while there is no guarantee that Mueller will show up to the hearing, he heard nothing from either Mueller’s representatives or the White House to indicate that the special counsel would not testify. … ‘Obviously, until the date comes, we never have an absolute guarantee,’ he added in response to a question of whether or not Mueller will show up. ‘The White House has so far indicated they would not interfere with Mr. Mueller's attempt to testify; we hope that won't change.’”

Trump reverses stance, objects Mueller testifying to Congress - NYT: “President Trump reversed himself on Sunday and said that the special counsel, Robert S. Mueller III, should not testify before Congress, setting up a potentially explosive confrontation with Democrats over presidential authority and the separation of powers. The president argued on Twitter that Mr. Mueller’s report on Russian interference in the 2016 election — which found no conspiracy between Moscow and Mr. Trump’s campaign but did not exonerate the president on obstruction of justice — was conclusive and that Congress and the American people did not need to hear from Mr. Mueller. ‘Bob Mueller should not testify,’ he said. ‘No redos for the Dems!’”

THE RULEBOOK: CASH ONLY
“A nation cannot long exist without revenues. Destitute of this essential support, it must resign its independence, and sink into the degraded condition of a province.” – Alexander Hamilton, Federalist No. 12

TIME OUT: MOVE OVER FOUR EYES
Smithsonian: “The word ‘scallop’ usually evokes a juicy, round adductor muscle—a seafood delicacy. So it isn't widely known that scallops have up to 200 tiny eyes along the edge of the mantle lining their shells. The complexities of these mollusk eyes are still being unveiled. A new study published in Current Biology reveals that scallop eyes have pupils that dilate and contract in response to light, making them far more dynamic than previously believed. … The optics of scallop eyes are set up very differently than our own ocular organs. As light enters into the scallop eye, it passes through the pupil, a lens, two retinas (distal and proximal), and then reaches a mirror made of crystals of guanine at the back of the eye. The curved mirror reflects the light onto the interior surface of the retinas, where neural signals are generated and sent to a small visceral ganglion… The structure of a scallop's eye is similar to the optics systems found in advanced telescopes.”

**and now, for this important commercial message**
Consider yourself an Influencer? Become a trusted advisor in our FOX News community and help guide our brand’s future. Click here to find out how.

Members of FOX News Influencers have the opportunity to be heard, be part of a special network of peers and influence new initiatives. What’s more, you’ll receive updates on how your input has made an impact.

Fill out our qualification survey and join us. Thank you for your continued support in our company’s growth.
**we now return you to our regularly scheduled political palaver**

BIDEN FOCUSES ON TRUMP, NOT REPUBLICAN PARTY
NYT: “As Joseph R. Biden Jr. made his way across Iowa on his first trip as a 2020 presidential candidate, the former vice president repeatedly returned to one term — aberration — when he referred to the Trump presidency. … There is no disagreement among Democrats about the urgency of defeating Mr. Trump. But Mr. Biden’s singular focus on the president as the source of the nation’s ills, while extending an olive branch to Republicans, has exposed a significant fault line in the Democratic primary. Democrats, like Senators Bernie Sanders and Elizabeth Warren, see the president as a symptom of something deeper, both in a Republican Party overtaken by Trumpism and a nation cleaved by partisanship. Simply ousting Mr. Trump, they tell voters, is not enough. It’s a debate that goes beyond the policy differences separating a moderate like Mr. Biden from an insurgent like Mr. Sanders, elevating questions about whether the old rules of inside-the-Beltway governance still apply.”

MassGOP approves plan to protect Trump in 2020 primary - Politico: “The Massachusetts Republican Party is aiming to protect President Donald Trump from primary challengers such as former Massachusetts Gov. Bill Weld by approving a new winner-takes-all delegate plan. The MassGOP approved the 2020 plan last week and will now award all of the party's delegates to the Republican candidate who clears more than 50 percent of the vote in the state presidential primary. The strategy is a departure from the 2016 primary, when the state party used a proportional method to award delegates to the 17 Republicans running for president. The delegate plan is the latest example of a shifting Massachusetts Republican Party under Chair Jim Lyons, who was elected in January.”

BERNIE IS PLAYING TO WIN
Daily Beast: “In just the last month, Sen. Bernie Sanders (I-VT) unloaded a blistering attack on a leading Democratic think tank. He went after former Vice President Joe Biden on a number of policy fronts. And one of his top congressional surrogates accused Mayor Pete Buttigieg of intellectual dishonesty. It’s a new, more aggressive look for Team Sanders. The senator … was known as a gruff but endearing candidate … [is baring] his fangs more quickly this time, in hopes that it may actually win him the nomination. … It’s an effort, aides and associates say, born from the new role he occupies in Democratic politics. With his name ID having skyrocketed after his last run—and having assumed the role of the ideological pied piper of the left—Sanders himself said he no longer feels he needs to take the time to introduce himself or his ideas to voters.”

Biden labels trump a ‘clown’ during campaign stop - Fox News: “Former Vice President Joe Biden took a page out of President Trump’s playbook on Saturday when asked at a South Carolina fundraiser if he had a nickname for the president. The 2020 Democratic presidential front-runner said he didn’t want to get down in the mud with Trump, but if he had to choose a moniker for the current White House occupant it would be a ‘clown.’ ‘There’s so many nicknames I’m inclined to give this guy,’ Biden said, according to Politico. ‘You can just start with clown.’ … At the private fundraiser on Saturday, Biden said Trump’s nicknames were part of his war of words with his political rivals that are meant to keep the discussions away from the issues. ‘On every single issue and on every demeaning thing he says about other people, I have no problem responding directly,’ Biden said.”

Beto takes a stance on impeachment - Dallas Morning News: “Beto O’Rourke now explicitly supports impeaching Donald Trump — a stance he had avoided since launching his own campaign for president. ‘We're finally learning the truth about this president. And yes, there has to be consequences. Yes, there has to be accountability. Yes, I think there's enough evidence now for the House of Representatives to move forward with impeachment,’ he said in an interview with The Dallas Morning News. … The direct call for impeachment was a shift for the El Paso Democrat, who has long favored impeachment but had refrained from advocating for it or even mentioning it unprompted, as he did Friday. … On Friday, he invoked impeachment in response to an open-ended question about his views on the Mueller investigation that made no mention of impeachment.”

Six Dems below the donor number needed for debates - Politico: “The unconventional, often gimmicky fundraising arms race is part of a desperate scramble to make it past a new threshold set by the Democratic National Committee, 65,000 individual donors, to the first primary debates in June and July. The televised debates could be make-or-break showcases for the 2020 presidential candidates, and the requirement has reshaped the strategy of candidates struggling to cross the donor mark, changing spending priorities and altering the path of their campaigns. … Six candidates — [Kirsten] Gillibrand, [John] Delaney, [Jay] Inslee, former Colorado Gov. John Hickenlooper and Reps. Tim Ryan and Eric Swalwell — have met the qualification criteria for the debate through their polling, but not through their donors. Sen. Cory Booker and Julian Castro both achieved 65,000 donors within the last few days…”

JUST ANOTHER DAY IN ALASKA
UPI: “An Alaska woman won $311,652 for guessing the exact date and time a tripod would fall into the water after ice gave way on the Tanana River in Nenana, Alaska. Anchorage native Patricia Andrew predicted the ice would go out on April 14 at 12:21 a.m. Alaska Standard Time -- making her the only contestant to guess the correct time, officials announced Friday. ‘She had no clue,’ Cherrie Forness, who runs the Ice Classic told the Daily News-Miner. … People buy tickets for the annual event to guess what day and time a tripod sitting on top of the frozen river will fall into the water as the ice melts. This is the first time since 2013 the ice classic had only one winner. If no one chooses the exact time of the tripod falling into the water, the person who guesses the minute closest to the actual time wins.”

AND NOW, A WORD FROM CHARLES…
“If a revolution is both popular and democratic, it is hard to see the moral objection to extending it support.”  – Charles Krauthammer (1950-2018) writing in Time magazine June 24, 2001.