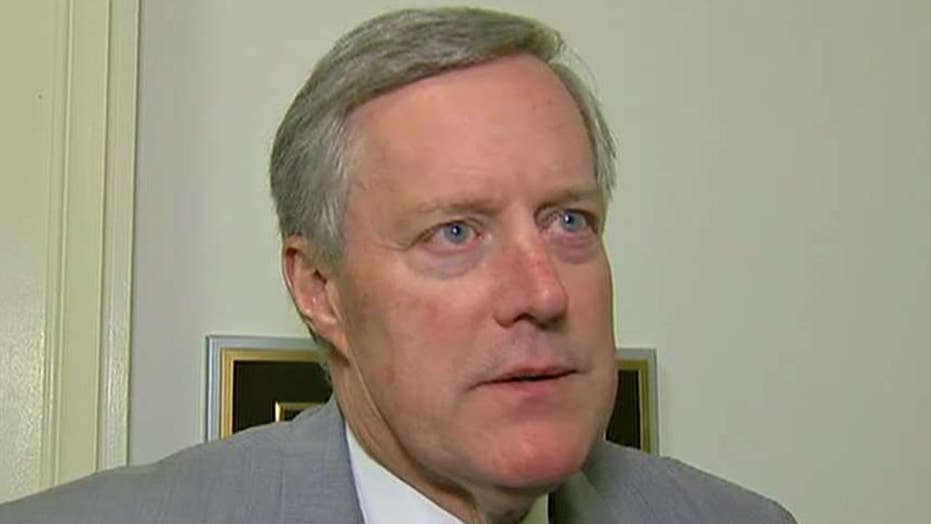 House conservatives said late Tuesday that there is not enough Republican support of the GOP’s plan to prevent a government shutdown after both sides of the aisles locked horns on items like the border wall and DACA.

Rep. Mark Meadows, R-N.C., the leader of the House Freedom Caucus, emerged from the meeting to say its members -- and other GOP lawmakers as well -- want a short-term bill keeping federal agencies open to contain added money for the military.

"There's not enough support to pass it with GOP-only votes in the House," Meadows, told reporters. He said he planned to discuss their concerns with Republican leaders. The GOP focus on keeping government open comes as it's become certain there's no time to cut a deal by Friday on protecting young immigrants.

The disagreements are not all that uncommon, but both parties hope to avoid an election-year shutdown when the Senate is up for grabs.

The block by the hard-right group came as Republican leaders raced against a 12:01 a.m. deadline on Saturday to push a short-term spending bill through Congress.

If they fail, federal agencies would start shutting their doors over the weekend.

House Republican leaders tried to win over wary conservatives with a promise to repeal unpopular taxes as part of the bill preventing a shutdown. They sweetened the plan with a two-year delay on implementation of unpopular taxes on medical devices and generous employer-subsidized health care plans. The taxes, also unpopular with many Democrats, are part of former President Obama's marquee health law.

Republicans in the House are scheduled to meet on Wednesday to talk about possible changes, The Journal reported.

Democratic leaders said they would not promise to vote to keep the government open past Friday without a plan to preserve a program that protects the young immigrants known as "Dreamers."

Many Democrats said they're still unlikely to support the measure without an agreement on immigration.

"We don't want to shut down the government. ... We want to keep the government open," Democratic Whip Steny Hoyer, D-Md., told reporters. "But we're not going to be held hostage to do things that we think are going to be contrary to the best interests of the American people."

The temporary funding bill would also include a long-delayed, six-year renewal of a popular health insurance program for children of low-income families. It would fund the government through Feb. 16.

Even if they succeed in the House, Republicans would still need at least nine Democratic votes to push a spending package through the Senate, which the GOP controls 51-49. Democrats seeking leverage are forcing that bill to require 60 votes for passage.

On the left, liberal groups are ramping up pressure on Democrats to resist any spending plan, threatening primary challenges and public ridicule for Democrats unwilling to risk a government shutdown to save the program for young immigrants.

Meanwhile, the bipartisan group of senators continued work to build support for a plan to protect the "Dreamers" and toughen border security, including funds to start building Trump's long-promised border wall.