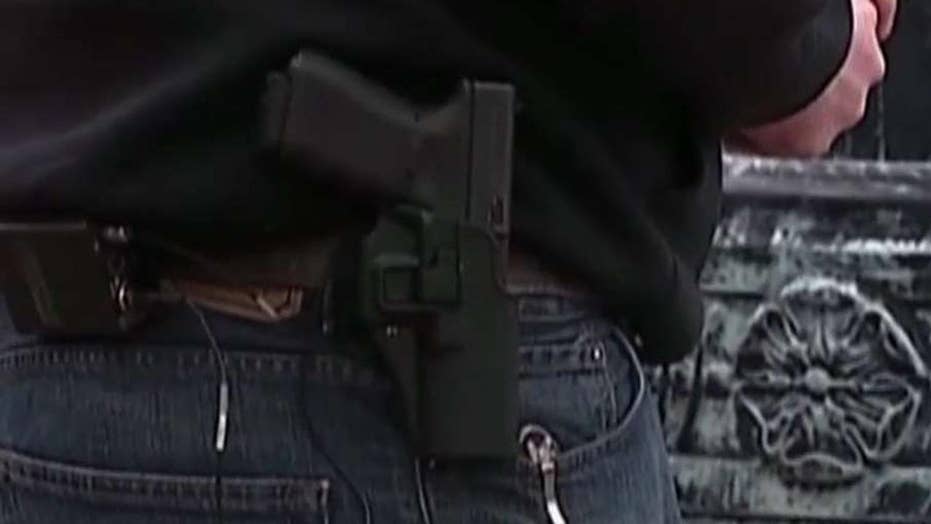 But similar Senate legislation still faces an uncertain future, with top Democrats and other gun-control advocates rallying in opposition on Capitol Hill.

The Concealed Carry Reciprocity Act passed 231-198 in the GOP-controlled House, with six Democrats voting in support.

“For the millions of law-abiding citizens who lawfully carry concealed to protect themselves, for conservatives who want to strengthen our Second Amendment rights, and for the overwhelming majority of Americans who support concealed carry reciprocity, Christmas came early,” Rep. Richard Hudson, R-N.C., the bill's sponsor, reacted.

Hudson had tried unsuccessfully for years to pass such legislation, which he says simply attempts to clarify the patchwork of state laws that confuse citizens who might unwittingly be arrested while going from state to state.

"Despite scare tactics by the bill’s opponents, concealed-carry licensees as a group have proven to be more law-abiding than the general population and even the police.”

The three-term congressman has garnered strong support for his bipartisan legislation -- including 213 co-sponsors as well as 24 state attorneys general and the National Rifle Association.

“Despite scare tactics by the bill’s opponents, concealed-carry licensees as a group have proven to be more law-abiding than the general population and even the police,” the NRA said before balloting. “We are on the eve of  passing the most expansive piece of self-defense legislation in the history of Congress.”

New York Democratic Rep. Jerrold Nadler said at a rally outside House chambers, that Hudson’s bill represented “a gift to the gun lobby.”

Another critic is Jane Dougherty, whose sister, a teacher, was killed in the 2012 Sandy Hook Elementary School massacre. She said, “This bill would weaken laws that I have worked hard for.”

Those attending the rally continued to make the argument that the bill would put guns in the hands of criminals, and suggested that those from states with loose concealed-carry laws would be able to exercise those privileges in places like New York City that have stricter requirements.

“When I go to New York, I have to follow New York’s laws,” Hudson recently told “Fox News @ Night." He also maintains that the bill in no way softens background checks.

Those at the rally also contended that the House bill was combined with so-called “Fix NICS” legislation so it could pass. The reciprocity bill includes efforts to create “maximum coordination” in states providing the federal government with mental health records and other information for FBI gun background checks.

The Fix NICS Act of 2017 is a bill that applies penalties to government agencies for not reporting to the National Instant Criminal Background Check System.

“They are combining these to pieces of legislation together because they know the conceal carry (bill) is extremely unpopular,” said Connecticut Democratic Sen. Chris Murphy. Murphy praised Texas Sen. John Cornyn, a Republican who sponsors the Senate version of the concealed-carry legislation, for keeping the measures separate.

Gun-control advocates are also reportedly getting $25 million from ex-New York Mayor Michael Bloomberg, through his Everytown for Gun Safety group, to block the reciprocity bill.

Cornyn’s bill is now in his chamber’s Judiciary Committee.

In 2013, Cornyn got support for his bill from 13 Democrats, including seven who are still in the Senate. He would need their support and more to pass the measure with a 60-vote majority, considering Republicans have 52 senators in the chamber.