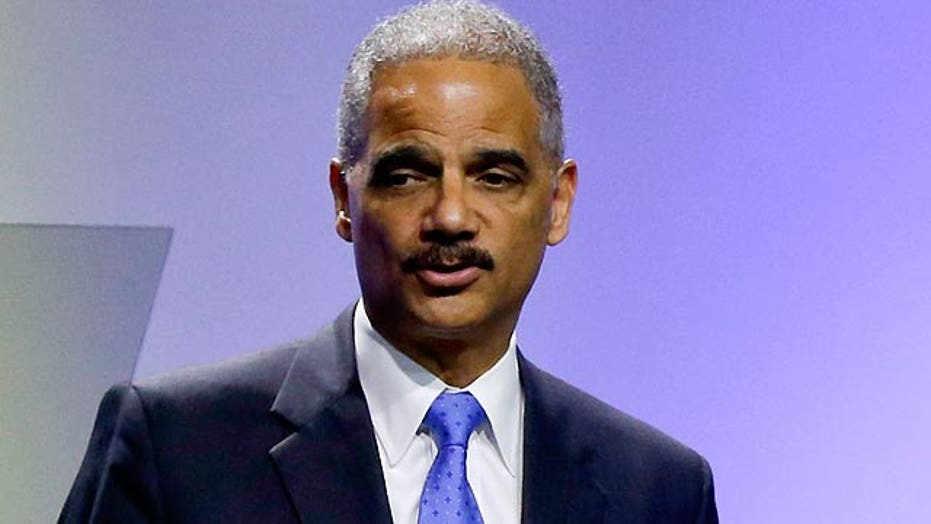 Attorney General Eric Holder waded deeper into the controversy over the George Zimmerman case and verdict on Tuesday, suggesting a national review of "stand-your-ground" laws during a speech before the annual NAACP convention in Orlando.

The NAACP is at the forefront of the effort to pressure the Justice Department to bring federal civil rights charges against Zimmerman. Holder confirmed on Monday that his department is reviewing that possibility, citing his personal concerns about the case.

He went a step further on Tuesday, weighing in for the first time on controversial state-level laws on self-defense.

"Separate and apart from the case that has drawn the nation's attention, it's time to question laws that senselessly expand the concept of self-defense and sow dangerous conflict in our neighborhoods," Holder said.

The comments were a reference to so-called "stand-your-ground" laws, which in Florida and other states allow people to use deadly force if they think their life is being threatened.

The role that law played in the Zimmerman shooting of 17-year-old Trayvon Martin is a matter of dispute.

But Holder suggested the laws encourage confrontation, saying there "has always been" a legal defense for using deadly force when retreat is not an option.

"But we must examine laws that take this further by eliminating the common sense and age-old requirement that people who feel threatened have a duty to retreat, outside their home, if they can do so safely," Holder said. "By allowing -- and perhaps encouraging -- violent situations to escalate in public, such laws undermine public safety."

He called for a "hard look" at the laws. The crowd applauded as he said "we must stand our ground."

The "stand-your-ground" laws have been a popular target ever since the Martin shooting, and the pressure has intensified after Zimmerman was acquitted on Saturday.

The NRA spoke out against Holder's speech in a statement released Tuesday night.

"To send a message that legitimate self-defense is to blame is unconscionable, and demonstrates once again that this administration will exploit tragedies to push their political agenda," Chris W. Cox, executive director NRA's Institute for Legislative Action, said.

Florida Gov. Rick Scott, though, told Fox News that officials should not politicize the case.

"We shouldn't turn this into politics. This was a tragedy," he told Fox News on Monday.

Scott noted that he already put together a bipartisan commission to examine Florida's "stand-your-ground" law.

"Their recommendation is we not make any changes, that it is working the way it was intended," Scott said.

A confluence of pressure campaigns, though, are weighing on Congress and the Obama administration.

Despite warnings from analysts and attorneys that the Justice Department would face an uphill climb in prosecuting Zimmerman on civil rights charges, an NAACP-led petition demanding such a case has apparently hit one million signatures.

He declared that he would not perform in Florida until the law is abolished.