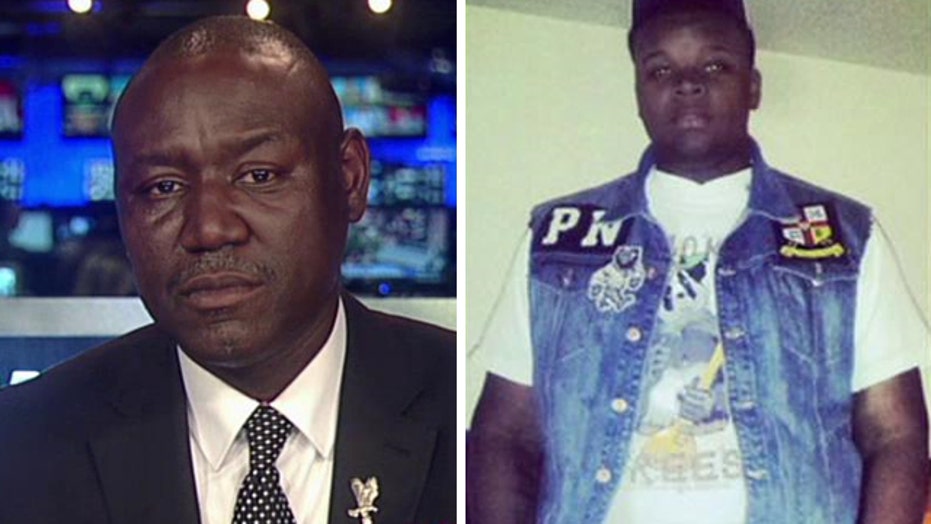 Attorney representing the family of Michael Brown says they are 'very troubled' by the violence in Ferguson, weighs in on grand jury investigation, Attorney General Eric Holder's visit and more. #Ferguson

Attorney General Eric Holder, one of President Obama’s longest-serving and most controversial deputies, is taking the lead in the federal government’s response to the roiling tensions in a St. Louis suburb over the police shooting of an unarmed man.

While the president, who is in Washington for two days of meetings, returns Tuesday evening to his family vacation in Martha’s Vineyard, Holder will head to Ferguson, Mo., where protests continue to give way to riots and looting on a nightly basis – straining law enforcement previously accused of being heavy-handed in their response.

From the White House, Obama is keeping a reserved tone by calling for calm on both sides, urging protesters to stay peaceful and police to show restraint. But at the Justice Department, Holder is committing what is being described as an “extraordinary” effort to investigate the local case.

Dupree said the response shows this case is something Holder “is personally invested in.”

Holder will visit Ferguson on Wednesday to meet with the FBI agents and other Justice Department personnel on the scene, as well as local community leaders. Holder’s Justice Department already has opened a federal civil rights probe – according to Politico, federal investigators are conducting hundreds of interviews and turning up information the local police haven’t – and conducted an additional autopsy of 18-year-old Michael Brown’s body.

A top DOJ official is heading to Ferguson Tuesday in advance of Holder’s arrival to work with local police.

Whether Holder and his department will ease or inflame tensions remains to be seen – it’s the same question that hangs over Missouri Gov. Jay Nixon’s decision to call in the National Guard.

Dupree voiced concerns that Holder is sending a signal to his department that there is a “correct outcome.”

“I don’t want to say they’ve prejudged it, but the statements he’s saying I think could lead people to conclude that there’s a right way and a wrong way to do things in the mind of the attorney general,” he said.

Holder said Monday that the “full resources” of DOJ are being committed, including more than 40 FBI agents on the ground.

“I realize there is tremendous interest in the facts of the incident that led to Michael Brown’s death, but I ask for the public’s patience as we conduct this investigation,” Holder said in a statement. “The selective release of sensitive information that we have seen in this case so far is troubling to me. No matter how others pursue their own separate inquiries, the Justice Department is resolved to preserve the integrity of its investigation. This is a critical step in restoring trust between law enforcement and the community, not just in Ferguson, but beyond.”

Holder also called for an end to violence and looting in Ferguson.

Holder, one of the few remaining members of the original Obama Cabinet, remains a lightning rod figure in Washington, for his role in several controversies. The Republican-led House voted to hold him in contempt of Congress in 2012, in connection with the botched Fast and Furious anti-gun-trafficking operation. His department more recently came under scrutiny for its surveillance of members of the media, and for allegedly not doing enough to investigate the IRS over alleged targeting of conservatives.

On matters of race, Holder has been outspoken. He called the country a “nation of cowards” on racial issues in 2009. As Obama did, he publicly identified with Trayvon Martin – the black teenager shot by George Zimmerman in Florida in 2012 – recalling incidents of racial profiling he faced as a young man.

This time, Obama has shied away from personalizing his response to the Ferguson shooting. But Holder is showing an acute interest in the case.

So far, his involvement is drawing praise from the state’s Republican senator, Roy Blunt, but also words of caution. Blunt said that he and Missouri Democratic Sen. Claire McCaskill will join the attorney general on Wednesday, and that he’s been “pleased with my conversations with the attorney general and civil rights division regarding their helpful understanding that they aren't taking over this investigation, but are conducting a parallel review.”

He called a “parallel federal investigation” into the death “important” but cautioned against DOJ taking on too large a role.