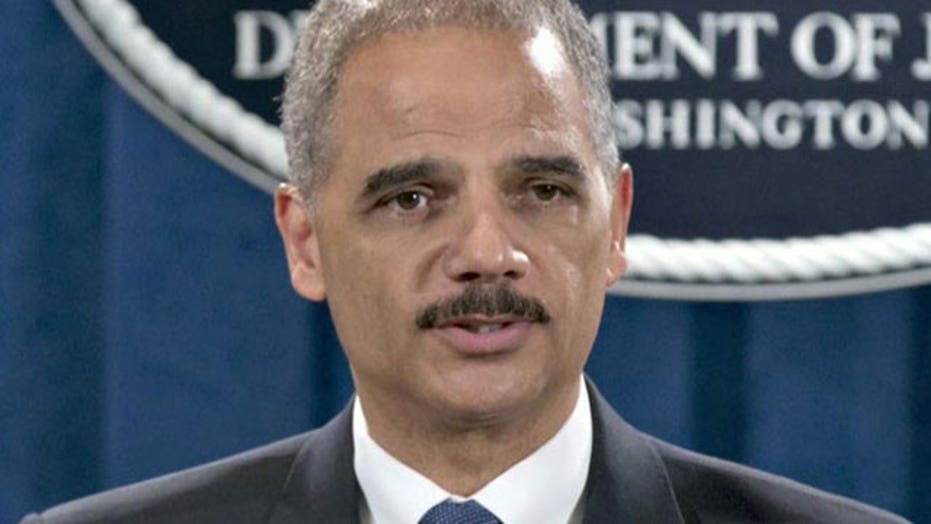 J.B. Van Hollen: Using opinions over the Constitution is 'dangerous'

Attorney General Eric Holder has given the nod to his state counterparts that they do not have to defend laws against constitutional court challenges if they consider them discriminatory -- effectively giving the green light for states to stop defending bans on gay marriage.

Holder addressed the issue during a gathering of state attorneys general on Tuesday, after detailing his position in a New York Times interview.

Speaking to the National Association of Attorneys General, Holder said that any decision not to defend individual laws in court must be "exceedingly rare" and reserved for "exceptional circumstances." He indicated that legal challenges to gay marriage bans would qualify as such a circumstance.

"In general, I believe that we must be suspicious of legal classifications based solely on sexual orientation," he said.

His remarks, while already generating backlash from conservatives, could fuel a wave of legal challenges at the state level. In the wake of the federal Defense of Marriage Act being struck down by the Supreme Court last year, several Democratic state attorneys general have taken the unusual step of abandoning their defense of state gay marriage bans.

Among the most recent is Virginia Attorney General Mark Herring, who stood by as a U.S. District Court ruled against his state's prohibition on same-sex marriage. However, his office said Monday that it would appeal that ruling -- in the interest of expediting the appeals process.

The U.S. attorney general's comments could encourage other state officials to follow in Herring's footsteps.

"A state attorney general has a solemn duty to the state and its people to defend state laws and constitutional provisions against challenge under federal law. To refuse to do so because of personal policy preferences or political pressure erodes the rule of law on which all of our freedoms are founded. A government that does not enforce the law equally will lead our society to disrespect the rule of law," Alabama Attorney General Luther Strange said.

Holder, in the Times interview, reportedly said that attorneys general should apply a high level of scrutiny on whether to defend a state law when constitutional issues are at stake.

"Engaging in that process and making that determination is something that's appropriate for an attorney general to do," Holder said.

He added, in reference to the Brown v. Board of Education case challenging school segregation: "If I were attorney general in Kansas in 1953, I would not have defended a Kansas statute that put in place separate-but-equal facilities."

But some Republican officials and gay marriage foes have sharply criticized this approach.

"She swore an oath of office that she would enforce all the laws, not just those she personally agrees with. The people are entitled to a vigorous defense of the laws they enact, and the marriage amendment is no exception to that solemn obligation," he said in a statement.

As for Holder's comments, Ed Whelan, president of the Ethics and Public Policy Center, disputed Holder's guidance and said in a statement following the speech that "state attorneys general are obligated to defend state marriage laws."

He added: "It's unfortunate and outrageous that Attorney General Holder doesn't understand that, but it's hardly surprising."

In Virginia, the federal court case could have major implications for similar laws throughout the southeast.

Adam Umhoefer, executive director of the American Foundation for Equal Rights, urged the Fourth Circuit Court of Appeals to uphold the lower-court decision.

"Loving gay and lesbian couples and their families should not have to live one more day as second-class citizens under unjust laws," he said in a statement.