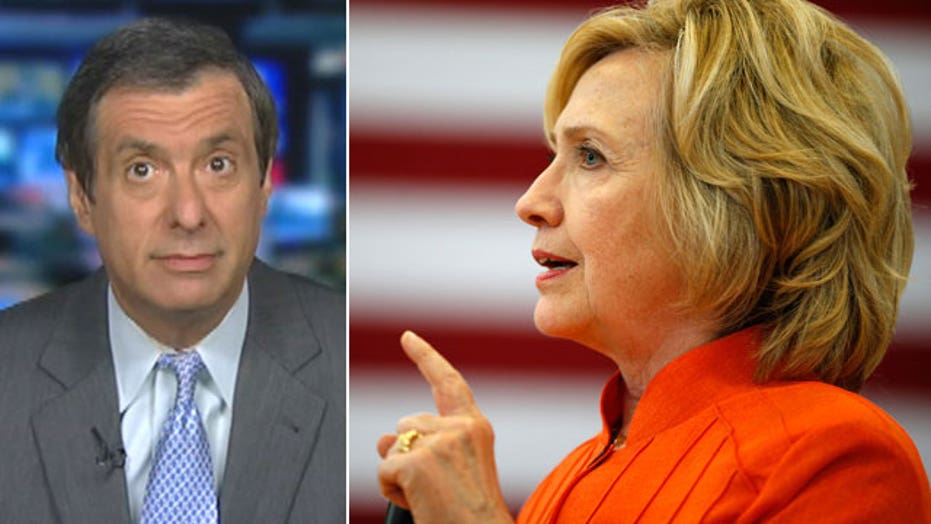 Kurtz: Clinton pummeled by the press

Hillary Clinton is being accused of tone-deafness, of being in a bunker, of insulting our intelligence.

And that’s just the mainstream media.

That calamity of a press conference on Tuesday has opened the floodgates of criticism, and even many of the liberal commentators who might be expected to support her are throwing up their hands. She is being legalistic and defensive and not ceding a centimeter.

It’s a bit much to say that the press has turned on Hillary, since relations between the two camps have always been tense. But there’s been a shift in the punditry, which had already concluded that the former first lady is mishandling this scandal. Now the accusation is broadening to the notion that maybe she’s just a lousy candidate.

That was certainly the case in 2007 and 2008, when Hillary went from inevitable to incompetent in the eyes of the media as she blew a 30-point lead. But this time was supposed to be different, with a younger, friendlier, more tech-savvy staff and a humbled candidate reaching out to ordinary voters.

The press, of course, tends to run in a pack. With Clinton’s poll numbers slipping and her server under FBI investigation, some accounts suggest that her campaign ship could be in danger of capsizing. Donald Trump says it would take a “miracle” to save her campaign, a dire prediction that is obviously self-serving. He’s even pulled within 6 points of her in the latest general-election matchup.

But journalists should be careful not to lose sight of the fact that Hillary remains the overwhelming Democratic front-runner, not likely to be beaten by Bernie Sanders or Joe Biden or anyone else unless she completely implodes.

Still, it’s impossible to deny that she’s had a rough few months. I reported right after her Roosevelt Island kickoff, based on an interview with Clinton’s communications director, that Clinton would start doing national TV interviews. Since then, while she answers more questions on the trail, Hillary has done exactly one—with CNN’s Brianna Keilar — and has one more scheduled, with…Ellen DeGeneres.

Trump calls into more shows than that before breakfast.

Mark Halperin, who has been around the block, said on MSNBC that Hillary’s is the most unresponsive campaign he’s ever dealt with.

Liberal Washington Post columnist Gene Robinson rips her on the email mess: "I wish Hillary Clinton would be respectful enough to say, 'I’m sorry. I was wrong.' I wish she wouldn’t insult our intelligence by claiming she only did what other secretaries of state had done."

Bloomberg's John Heilemann: "The tone-deafness. The bunker mentality. The tendency toward a state of denial.”

National Journal's Ron Fournier on “Face the Nation”: "A year ago, if you had asked me, hey, would you consider working for Secretary Clinton, I'd say, yes, I'd think about it." Now, "I don't know if I can trust Hillary Clinton anymore and it doesn't make me happy to say that."

One troubling sign is that anonymous Dems are starting to trash her, as in this piece by the Washington Post’s Chris Cillizza:

“Increasingly, Democrats -- privately, of course -- have begun to wonder whether the problem is not the campaign but the candidate.

“‘She has always been awkward and uninspiring on the stump,’ said one senior Democratic consultant granted anonymity to candidly assess Clinton's candidacy. ‘Hillary has Bill’s baggage and now her own as secretary of state -- without Bill’s personality, eloquence or warmth.’”

As for the handling of the email fiasco, “the appearance here -- even if Clinton did nothing wrong (and there is no proof she did at this point) -- is terrible. It's hard for me to believe that the smart press and communications people on Clinton's team recommended this approach to the e-mail story -- a drip, drip, drip of allegations that not only keep the story in the news but also continually seem to undermine their candidate's credibility on the issue.”

Despite his criticism of Hillary’s scandal management skills, Heilemann sees some improvement—to a point:

“Unlike in 2007, when her events in Iowa were long on  bombast and utterly impersonal, she has gamely undertaken a more intimate kind of voter contact this time around…Clinton’s itineraries on her frequent trips to Iowa this year have revolved around town hall meetings, small group events, roundtables, and private house parties. By all accounts, she has excelled in such settings.”

Things have reached the point that Guardian columnist Mary Dejevsky, a self-described “Hillary fan,” is calling her “a hugely divisive figure” who “may not be electable” and urges her to quit the race with her dignity intact.

But let’s not get carried away. Hillary’s communications director, Jennifer Palmieri, calls her candidate “durable. You cannot knock her down. She’s been through months and months of pretty much 19 candidates on both sides attacking her every day, and she thrives,” Palmieri said on MSNBC.

The resilient part is true, but Hillary is not exactly thriving right now. And she needs to figure out a way to resolve these questions without the testiness that marred her Nevada press conference.