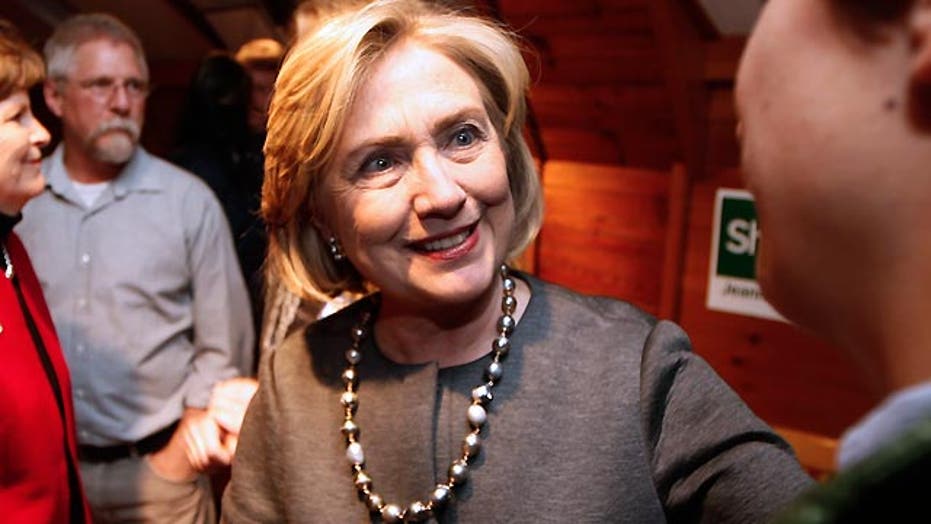 Hillary Clinton and the media

You might have thought, after a traumatic and gut-wrenching defeat for the Democrats, that the midterms were a nightmare for Hillary Clinton.

Ah, but you don’t understand the sophisticated spin at work. The election was actually her dream come true!

Her team has convinced some reporters and pundits — or they have convinced themselves — that Hillary emerges enhanced from the wreckage.

I’m skeptical of that, but I’m also going to let you in on a secret: The midterms were probably a wash for Hillary. This whole notion that when a big shot goes out and campaigns for candidates and gets some credit for the victories and some blame for the defeats — it’s a journalistic construct. Most voters don’t care about endorsements. Alison Lundergan Grimes loses to Mitch McConnell by nearly 16 points, and Hillary was supposed to have saved her?

No one wants to say that, because it doesn’t get you clicks or ratings. So there’s a “debate”: Did the midterms help or hurt?

If I had to choose I’d lean toward hurt. But here’s what the New York Times says in a front-page story:

“The lopsided outcome and conservative tilt makes it less likely she would face an insurgent challenger from the left.” Like Hillary was losing sleep over Bernie Sanders?

“And a Republican-led Senate creates a handy foil for her to run against: Rather than the delicate task of trying to draw a stark contrast with an unpopular president in whose administration she served, her loyalists say, Mrs. Clinton can instead present herself as a pragmatic alternative to what they predict will be an obstructionist Republican Congress.

‘Rand Paul and Ted Cruz and their allies in the House’ will be ‘pushing Republican leadership hard,’ said Geoff Garin, a pollster who succeeded Mark Penn as chief strategist for Mrs. Clinton’s 2008 campaign. ‘When that happens, it will give Hillary Clinton or whoever the Democratic nominee is a better platform to run.’”

An obstructionist Republican Congress? We’ll have to see. Pure spin, of course. But if you’re going to quote the spin from the left, why not include the shots from the right — such as Rand Paul saying the midterms were not only a referendum on President Obama but on Hillary?

Now it’s true that it will be easier for Hillary to run against a Republican Senate and House rather than dancing around Harry Reid. But it’s also true that as a former secretary of State, she is inextricably tied to an administration that was just repudiated at the polls, regardless of how she might try to distance herself.

Yahoo News has also been trumpeting the notion that Hillary is a 2014 winner:

“Even Tuesday's huge GOP victory shows that Republicans still have some catching up to do if they want to defeat her in 2016.

“Let’s start with the map. Sure, the GOP won a remarkable number of races Tuesday night. But how many purple states did Republicans actually pick up?

“For every Senate seat that Republicans flipped in 2014, there’s one — or more — that’s likely to flip back to the Democrats in 2016. The chances that the GOP will still control the upper chamber of Congress after 2016 are slim.

“How does this help Clinton? By giving her an added boost on an electoral playing field that already favors a Democratic presidential nominee.”

That seems a stretch. The electoral map was always going to favor the Dems in 2016, regardless of last week’s outcome. And to take one example, instead of having friendly Democratic governors in Florida, Illinois and Wisconsin, the machinery will be controlled by Republicans.

The conservative Washington Free Beacon takes the other side:

“The 2014 election was a disaster for Hillary Clinton. Why? Let us count the ways.

“She will have to run against an energetic and motivated Republican Party. If the GOP had failed to capture the Senate, the loss would have been more than demoralizing…

“She would have claimed partial credit for saving the Senate. She would have promised to build on Democratic success. You would have been able to see her aura of inevitability for miles.

“But she has been denied. Instead she must calculate how to salvage the wreckage of 2014. She must convince Democrats that their savior is a grandmother who lives in a mansion on Massachusetts Avenue. It is her party that is shell shocked, not the GOP. Trust me: You don’t want to be in that position.”

The author of the Times piece, Amy Chozick, has reported aggressively on Hillaryland, and she did break the news that the unofficial candidate will stop her paid speeches and go on a listening tour (sound familiar?) before her announcement. Plus, the campaign headquarters will likely be in New York’s Westchester County (the better to appeal to suburban voters than, say, Manhattan).

The bottom line is that Hillary will be running for a third Democratic term. Beats me why anyone thinks that task was made easier by the party’s midterm drubbing.