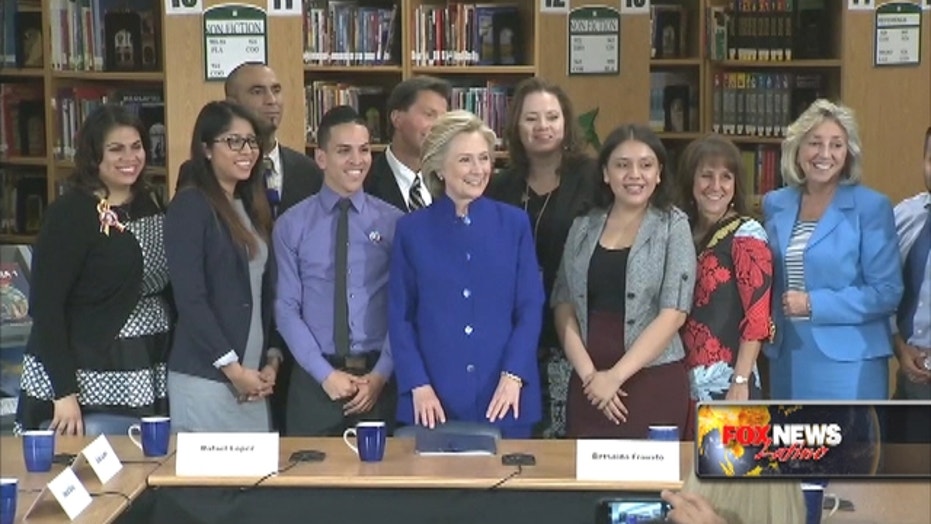 Hillary Rodham Clinton is giving immigration a prominent role in her 2016 presidential campaign.

Clinton said Tuesday that any immigration legislation must include a path to "full and equal citizenship" and defended President Barack Obama's use of executive actions to shield millions of immigrants from deportation as a necessary move in the face of congressional inaction.

"I will fight for comprehensive immigration reform and a path to citizenship for you and for families across our country," Clinton said at a Las Vegas high school, joined in the library by students who have been protected by Obama's executive actions. "I will fight to stop partisan attacks on the executive actions that would put Dreamers ... at risk of deportation."

She added, "if Congress refuses to act, as president I will do everything possible under the law to go even further."

Taking on the GOP field, Clinton said "not a single Republican candidate" has supported a path to citizenship for immigrants living in the United States illegally. "When they talk about legal status, that is code for second-class status," she said.

Clinton's remarks came during her first campaign stop in Nevada — she was spending Wednesday and the remainder of the week raising money in California — and underscored Democrats' efforts to box-in Republican presidential candidates who have opposed a comprehensive bill including a pathway to citizenship. Congressional Republicans have said the changes must be made incrementally, beginning with stronger border security.

The issue resonates with many Hispanic Americans, who backed President Barack Obama by wide margins over Republican Mitt Romney in 2012 and helped the president's re-election campaign capture several hard-fought swing states, including Florida, Colorado and Nevada.

Republicans have sought to repair relations with Latino voters, led by former Florida Gov. Jeb Bush and Florida Sen. Marco Rubio, who have courted Hispanics and talked about ways to overhaul the immigration system while opposing Obama's executive actions last year to shield millions of immigrants from deportation.

Beyond Latino voters and Democrats, Clinton's words were also aimed at skeptics in immigration advocacy groups who have questioned her commitment to the issue.

Clinton voted for immigration overhaul measures in the Senate but has been tripped up by the issue in the past. During the 2008 primaries, she initially vacillated on and then opposed allowing immigrants living in the U.S. illegally to obtain driver's licenses. Her campaign said last month she now supports state policies that allow driver's licenses under those circumstances.

Last summer, Clinton drew grumbles from immigration advocates when she said unaccompanied minors from Central America should be sent back to their homes. In the fall, some young Hispanics heckled her at a few campaign events, urging her to pressure Obama to issue the executive orders.

Republicans questioned Clinton's commitment to the issue, pointing to her initial hesitation to back the executive actions last year.

"Obviously she's pretty good at pandering and flipping and flopping and doing and saying anything she needs to say," Republican National Committee Chairman Reince Priebus said in Denver.

Obama's executive actions loom large in the immigration debate. The orders included the expansion of a program protecting young immigrants from deportation if they were brought to the U.S. illegally as children. Another provision extended deportation protections to parents of U.S. citizens and permanent residents who have been in the country for several years.

Twenty-six states, including Nevada, have sued to block the plan, and a New Orleans-based 5th Circuit Court of Appeals panel is considering a challenge.

Clinton, the leading Democrat in the presidential race, signaled she would build upon Obama's executive actions if elected president as a means of pressuring Congress to overhaul the system, a goal that has eluded both Obama and his Republican predecessor, George W. Bush. The Senate passed a comprehensive immigration bill in 2013 but it stalled in the GOP-led House.

Seated in the library at Rancho High School, which has a predominantly Hispanic student body, Clinton heard from several young immigrants, most of whom came to the U.S. as children and received legal status under Obama's executive action. Many said they were worried about their families and work opportunities.

Clinton is scheduled to spend the rest of the week in California at fundraisers in San Francisco, Los Angeles and Silicon Valley.