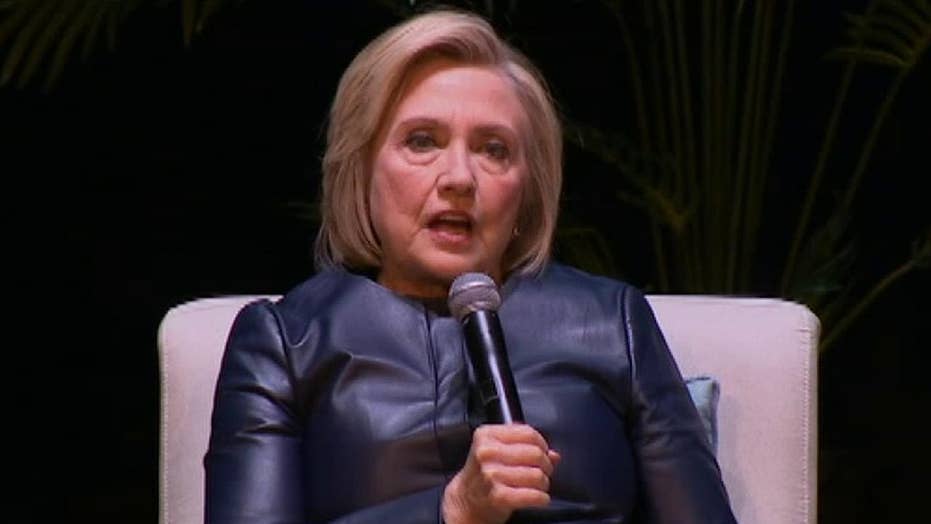 Hillary Clinton reacts to the arrest of Julian Assange

Hillary Clinton reacts to the arrest of Julian Assange during a speaking engagement in New York City.

Hillary and Bill Clinton took the stage at New York City's Beacon Theater as part of their ongoing speaking tour on Thursday, just hours after the dramatic arrest of Julian Assange -- the founder of the organization WikiLeaks that published damaging emails stolen from her campaign and the Democratic National Committee in 2016.

And, while the former first lady technically made good on her promise earlier in the day not to mention President Trump by name, she revealed while unloading on Assange that her 2016 rival was still very much on her mind.

"It's clear from the indictment that came out that it's not about punishing journalism," she told attendees and moderator Paul Begala, referring to the Assange case. "It's about assisting the hacking of the military computers, sealed information from the United States government. And, look, I'll wait and see what happens with the charges and how it proceeds, but he skipped bail in the U.K., in Sweden had those [rape] charges which have been dropped in the last several years. But, the bottom line is that he has to answer for what he's done, as has been charged."

She then added, to the apparent delight of both the audience and a guffawing Begala: "I do think it's ironic that he may be the only foreigner that this administration would welcome to the U.S."

The Clintons then took aim at the Electoral College, the foundational constitutional system which effectively reduces the influence of more populous -- and, generally, more liberal -- states in deciding presidential elections as compared to a popular vote system.

"Yeah, I think that every day," Hillary Clinton said, referring to how Democrats failed to win the White House despite winning the popular vote in 2000 and 2018. "The day after the election, among the many things I was doing, I was listening to the radio. They were interviewing a French political scientist who said, 'Well I do not understand, in our country the person who wins the most votes wins.' We are equally confused."

She added: "I said in 2000 I think it should be abolished. We've evolved; one person, one vote. I had no idea that 19 years later I would feel even more strongly."

Bill Clinton jumped in to note that "communications" back when the Electoral College was instituted "weren't what they are today."

The Clintons talk about abolishing the electoral college

Bill and Hillary Clinton react during a speaking tour in New York City.

"It's not like the small states would be shafted," the former president continued. "If we don't do something about this within 20 years, 70 percent of people who live in America will live in concentrated areas. The whole ground on which the electoral college was constituted no longer makes any sense."

Separately, the Clintons reacted to the news that Israeli Prime Minister Benjamin Netanyahu apparently had won a fifth term in office.

A newly unearthed, secretive batch of classified and sensitive emails from Clinton's personal email server showed that the former secretary of state discussed establishing a "private, 100% off-the-record" back channel with Netanyahu, and that one of her top aides warned her that she was in "danger" of being "savaged by Jewish organizations, in the Jewish press and among the phalanx of neoconservative media" as a result of political machinations by "Bibi and the Jewish leadership."

Obama administration officials, including the Clintons, have long had tense relations with Netanyahu -- with The New York Times describing the situation as "poisonous" in 2015 as Clinton's second presidential bid was gearing up.

"You should never underestimate him. He's highly intelligent," Bill Clinton said, referring to Netanyahu. "When we see Israeli elections, we say, 'How does this shake out for the peace process? There's lots of minority parties in Israel, and more of them aligned with the settler movement or religious fundamentalism than secularism or wanting peace."

Hillary Clinton added that she had worked closely with Netanyahu on a "range of issues."

"There has to be some approach to reconciling the security needs of the Israelis with the need for greater autonomy and governanace by the Palestinians," Clinton said.

The Clintons' speaking tour is set to continue for several more weeks, with visits to Vancouver, Canada, as well as Philadelphia, Boston and elsewhere.