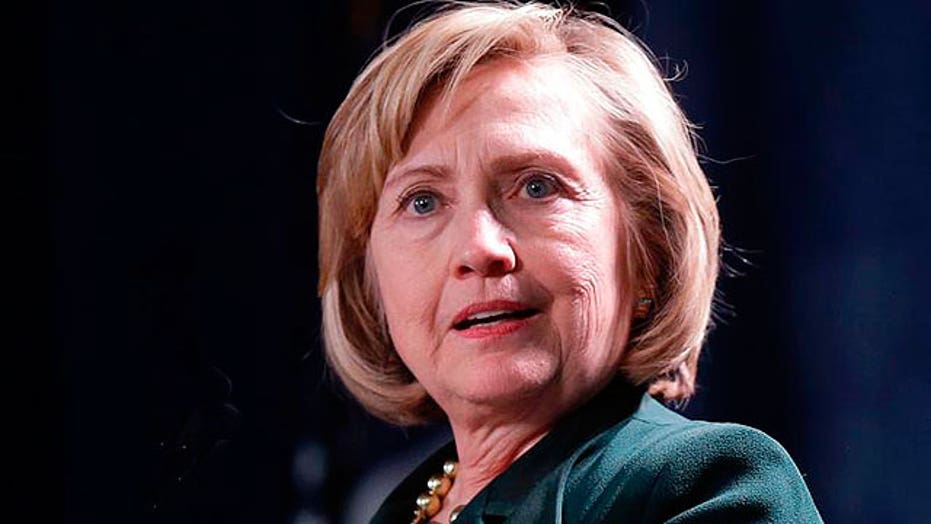 I don't know about you, but when I get an email titled "Your Obsessive and Loathsome Coverage," it's not too long before I hit the delete button.

Fortunately, New York Times reporter Amy Chozick didn't do that when she got such a missive from a hyperactive Hillary Clinton supporter. She hit the tweet button instead.

Now let me inoculate myself, as a male member of the species, by saying that yes, there was some sexism directed at Hillary in the 2008 campaign -- remember those "Iron My Shirt" signs, and a weeklong debate about why she dared show a hint of cleavage on the Senate floor?

But John West, director of the group "HRC Super Volunteers," sees sexist media coverage everywhere these days, and has decided to launch a one-man (one-person?) crusade against it.

In the email to 120 journalists, West says that he and members of his group, who bonded on Facebook, "will not tolerate any form of sexist news coverage of any woman who chooses to break through glass ceilings; whether as a CEO or running for president of these United States. Already we have seen the coded language of sexism and innuendo used by major news outlets and we are not happy."

Not happy would be an understatement.

He cites such examples as the New Yorker calling Hillary "petulant'; USA Today, Time and the Washington Post describing her preference for "secrecy"; the New York Times daring to say she could "be seen as unduly secretive or imperious"; and Politico calling her "devious" and "defensive."

Then comes the threat:

"You are on notice that we will be watching, reading, listening and protesting coded sexism this time around in words and phrases like polarizing, calculating, disingenuous, insincere, ambitious, will do anything to win, represents the past, out of touch, inevitable, entitled, over confident, defiant, inserting snide comments on her looks like tired, haggard, worn out....the list goes on but I trust you get my point."

Has this guy seen what we call male politicians? How Ted Cruz was described as a "wacko bird" and worse this week? How Bob Dole was called old? How John McCain was called old and possibly missing a couple of screws from his time in a POW camp? How George W. Bush was derided as a lightweight? How John Boehner is too weepy?

Oh, and "ambitious" and "will do anything to win" are such common descriptions of political ladder-climbers that they are programmed into our keyboards.

When a Cabinet member keeps all her email on a private server and deletes the ones she says are personal, are the media calling her secretive because she's a woman?

Kim Frederick, a 36-year-old Houston woman who founded the Facebook group, explained her motivation to me:

"As a young woman, it was infuriating/insulting to me that the media hadn't learned how truly awful and disgusting they were in 2008 and tried to reign themselves in this time around. It doesn't just feel like an attack on Ms. Clinton, it feels like an attack on all of us because we go through the same types of things on our job, in daily life, or out in public or various random encounters, ourselves. It feels personal. If you would like to dissect her policy positions or facts about her past, that's fair game. But when I see magazine covers with her lying under a shack and depicting her as the Wicked Witch of the West, or altered pictures making her look worse or older, and then using words like hysterical, fits of rage, devious, manipulative, etc ... not only is it dishonest, disingenuous and biased reporting, but it's becoming very obvious to a lot of us."

I asked her whether some of these negative phrases aren't hurled at men in politics as well.

"How many times are male politicians referred to as secretive, calculating or ambitious?" Frederick asks. "These are words commonly reserved for ALL women who are perceived negatively when really they are just trying to make it in a male-dominated world...

"What is her experience? THAT is what matters. All else is biased calculating hysterics from a tired and lazy press."

I found her to be far more thoughtful than the overheated language in West's letter. He almost seemed to suggest that anyone in the media who sharply criticizes the former secretary of State can be dismissed as sexist. And if her team, as opposed to her super volunteers, goes down that road, it will be a long campaign.

To get a sense of what adjectives West would prefer, I found a comment he posted to a story by radio station WBUR:

"She is the most qualified candidate EVER. She is one of the smartest candidates EVER. She is one of the most admired and respected candidates EVER. The world over, knows who she is and about her work. Only in the U.S will you find 30% of the population that loathe her thanks to BILLIONS of dollars spent by KOCH BROTHERS and ALEC right wing shadow groups to take her out. That's also about the percentage of folks who watch Fox News. Hillary is remarkable, accomplished, and one of the hardest working public servants we could hope for. Tenacious and resilient. I admire that. She will be POTUS."

If only all those sexist pigs in the media will get with the program.