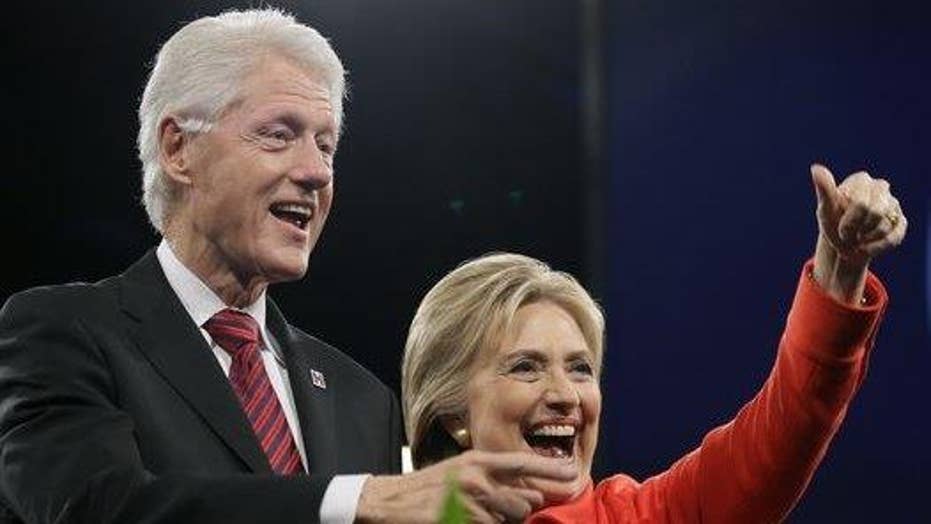 Should Trump be blaming Clinton for Bill's indiscretions?

“She was a co-conspirator,” she told FoxNews.com.

Kyle is a retired attorney in Little Rock who claims she carried on an affair with Bill Clinton for years, from 1974 to 1991. After presumptive Republican presidential nominee Donald Trump started turning his fire on his expected general election opponent – calling Hillary Clinton an “enabler” for Bill and claiming “some of these women were destroyed” by the way she treated them – Kyle suggested the remarks were not that far off.

She claims the former first lady indeed tried to discredit her story years ago. And, while the Democratic presidential front-runner has dismissed Trump’s attacks as part of a well-worn ‘90s “playbook,” Kyle is far from the only woman – either romantically linked to Bill Clinton or behind accusations of sexual misconduct – to have described the former first lady’s actions toward them in this way. A review of the record turns up numerous instances where Hillary Clinton was accused of seeking to intimidate or discredit women from her husband’s past.

Broaddrick took this as a warning.

“She did not say ‘be quiet,’ but it was the tone of her voice,” Broaddrick told FoxNews.com. “The second time she said it, the way her smile faded – it scared me.”

Bill Clinton has denied Broaddrick’s claims. After the 1999 allegation, Clinton attorney David Kendall said: "Any allegation that the president assaulted Ms. Broaddrick more than 20 years ago is absolutely false. Beyond that we are not going to comment."

Bill Clinton also pushed back this week on Trump calling him an “abuser,” saying, “I think people are smart enough to figure this out without my help,” according to footage aired by CNN. Trump, though, openly cited the “rape” allegation on Wednesday, in an interview with Fox News’ Sean Hannity.

To be sure, both Clinton and Trump are seeing their personal lives come under harsh scrutiny. A New York Times piece on Sunday – for which reporters interviewed dozens of women who worked for, dated and interacted with Trump – claimed the billionaire had a history of “unwelcome romantic advances” and “unsettling workplace conduct.” Trump, though, noted that a key figure in the piece, a former girlfriend, subsequently accused the Times of taking her words out of context, as he tried to turn the focus back to the Clintons.

Why doesn't the failing @nytimes write the real story on the Clintons and women? The media is TOTALLY dishonest!

In response, Hillary Clinton spokesman Brian Fallon told FoxNews.com the campaign does not plan to debate the 1990s.

"These are attempts by Donald Trump and his operatives to draw Hillary Clinton into decades-old allegations,” Fallon told FoxNews.com. “It is no surprise he is running his campaign from the gutter, but Hillary Clinton doesn’t care what he says about her. She will continue to call him out for his outrageous positions and divisive comments.”

Broaddrick said she wasn’t interested in talking about the past either until she saw Hillary Clinton tweet that every survivor of sexual assault “deserves to be heard, believed, and supported.” Clinton was asked at a December town hall if that includes Broaddrick and others who have leveled accusations against Bill Clinton. The former secretary of state responded, “Well, I would say that everyone should be believed at first until they are disbelieved based on evidence.”

So in January, Broaddrick re-emerged with her accusations and tweeted:

“I was staying to myself about this until she came out with that tweet, and I was flabbergasted,” Broaddrick told FoxNews.com.

Kyle also started speaking out after that statement, even writing a memoir titled, “Hillary the Other Woman.”

“I saw Hillary on TV making that statement about how women who have been raped and sexually assaulted should be believed. That was the last straw,” Kyle said.

Kyle also wrote a semi-autobiographical novel in the 1990s, and alleges that Clinton was involved in negative media leaks about her in order to discredit the novel as part of an effort to prevent its publication. “She specializes in telling lies and planting stories about women,” she said.

Liberal commentator Bill Press believes dredging up old Bill Clinton sex scandals, too far in the past for some voters to even remember, will not harm Hillary Clinton in the presidential race.

“It’s seen as unfair. The wife shouldn’t have to pay for the sins of the husband,” Press told FoxNews.com. “If Trump were running against Bill, it would be one thing. But she was a wronged woman. In a sense, she was a victim because her husband was running around cheating on her. It’s very hard to dredge that up and make it an issue in 2016.”

That doesn’t mean the allegations will go away.

Trump ally Roger Stone started the Rape Accountability Project for Education PAC, or RAPE PAC, earlier this year to spend money reminding the public of Bill Clinton’s alleged misdeeds and the former first lady’s alleged role in retaliation against accusers. One of those accusers is Kathleen Willey, who reportedly will be a national spokeswoman for the PAC.

Willey said the former president groped her in 1993. After Willey came forward with her allegation in a 1998 CBS “60 Minutes” interview, Hillary Clinton reportedly was involved in a decision to release letters from Willey in an attempt to discredit her. A federal judge found this violated the Privacy Act.

In a 2014 interview with Fox News, Willey said: “Hillary Clinton is the war on women. And I think that she needs to be exposed for all of the terror campaigns that she’s raised against women who were in the wrong place at the wrong time with her husband.”

Willey did not respond to inquiries for this story.

Dick Morris, a former adviser to Bill Clinton who later became a harsh critic, recalled that Hillary Clinton was adamantly opposed to her husband settling the sexual harassment case with Paula Jones. He also said in the early stages of the 1992 presidential run, she oversaw the “intimidating” of women from her husband’s past.

“Hillary oversaw the entire operation and charged … her top deputies and closest allies with implementing her instructions,” Morris told FoxNews.com.

Hillary Clinton reportedly was ready as well to take on Gennifer Flowers, with whom Bill Clinton had an affair. Author Gail Sheehy told NBC News in 1999 she was with Hillary Clinton at the time Flowers came forward. Sheehy recalled, “I said, 'What would you do if you had Gennifer Flowers in front of you?' And she says, 'If I had her on the stand I would crucify her.' She never said a word about Bill.” The interview was cited in a Flowers lawsuit against Clinton operatives.

And the papers of Hillary Clinton’s confidante Diane Blair, who died in 2000, say that Clinton referred to Monica Lewinsky, the White House intern with whom Bill Clinton infamously had an affair, as a “narcissistic loony toon.”