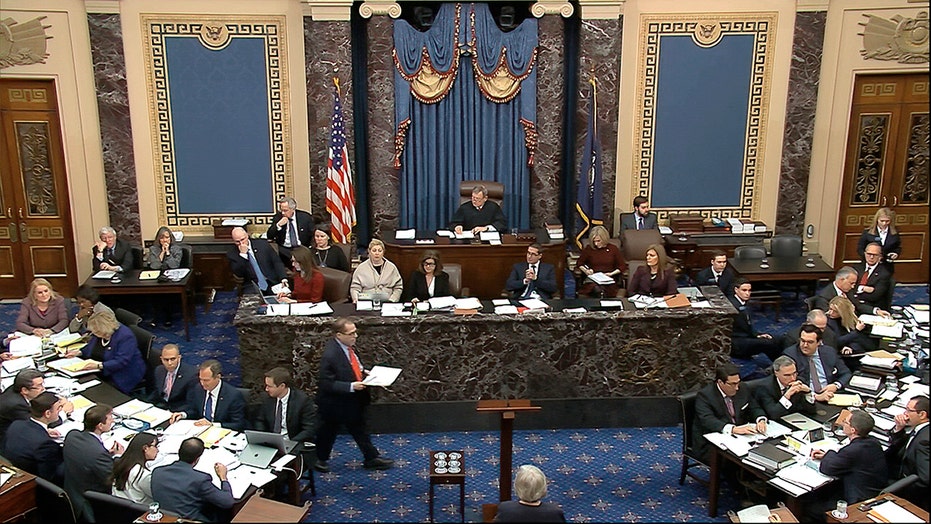 Senate impeachment trial's question and answer session allowed each side to reiterate some of their central themes; chief congressional correspondent Mike Emanuel reports.

With four of the candidates for the Democratic nomination for president stuck in Washington, D.C., for President Trump's impeachment, asking questions during the Senate trial's nationally televised session is one of the only ways for them to reach voters ahead of Monday's Iowa caucuses.

Below are the queries the Democratic presidential candidates – two of them at the top in the polls – asked to the House impeachment managers and Trump's defense team Wednesday.

To the House managers: "I was on the trial committee for the last impeachment trial in the Senate, which involved Judge Thomas Porteous who was ultimately removed. During that time, the Senate trial committee heard from 26 witnesses, 17 of whom had not previously testified in the House. What possible reason could there be for allowing 26 witnesses in a judicial impeachment trial and hearing none for a president’s trial?"

Answer: "I would say that the need for witnesses in the impeachment trial of a president of the United States is a far more compelling circumstance than the impeachment of a judge." — Rep. Adam Schiff, D-Calif.

Answers: "Bribery is contained within the accusation that the House levels of abuse of power. We explained in the Judiciary Committee report the practice of impeachment in the United States has tended to envelop charges of bribery within the broader standard of other high crimes and misdemeanors. That's the historical standard." — Rep. Jerrold Nadler, D-N.Y.

"This is an effort to smuggle into articles of impeachment that do not mention any crime, the idea that there is some crime alleged here. There is not. And I went through that earlier. The articles of impeachment specify a theory of the charge here that is abuse of power. They do not allege the elements of bribery or extortion. They don't mention bribery or extortion. If the House managers had wanted to bring those charges, they had to put them in the articles of impeachment. Just the way a prosecutor, if he wants to put someone on trial for bribery, he's got to put it in the indictment." — Patrick Philbin, deputy counsel to the president.

To the House managers: "Republican lawyers have stated ... that two people, Senator Johnson and Ambassador Sondland, were told directly by President Trump that there was no quid-pro-quo in terms of holding back Ukraine aid in exchange for an investigation into the Bidens. Given the media has documented President Trump's thousands of lies while in office, more than 16,200 as of January 20th, why should we be expected to believe that anything President Trump says has credibility?"

Answer: "If every defendant in a trial could be exonerated just by denying the crime, there would be no trial. It doesn't work that way. I think it's telling that when Ambassador Sondland spoke with President Trump, the first words out of his mouth, according to Sondland, there were 'no quid-pro-quo.' That's the kind of thing you do. You blurt out when you've been caught in the act and you say, 'it wasn't me, I didn't do it.'" — Rep. Adam Schiff, D-Calif.

Bennet did not ask any questions on Wednesday.