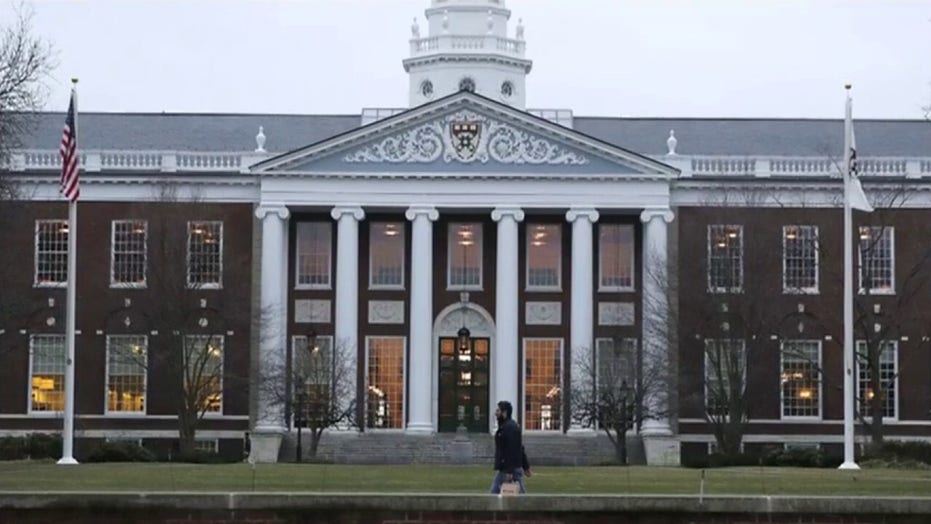 The university received nearly $9 million in federal funds through one of the government's relief programs doled out through the Department of Education; Former Education Secretary Margaret Spellings weighs in.

Well-heeled Harvard University came under fire this week for seeking millions in coronavirus relief, before declining the funds in the face of political pressure -- but dozens of universities with similarly large endowments were also eligible for aid.

Department of Education data obtained by Fox News showed a list of funds that colleges and universities across the country would be eligible for under the $2.2 trillion CARES Act passed last month, including those with multibillion-dollar endowments.

It is not clear from that list alone, however, what institutions were actively seeking the funding. And in the wake of the political heat on Harvard, several of the wealthiest universities are declining to accept any of it.

The CARES Act included the Higher Education Emergency Relief Fund which, in total, provided for more than $14 billion in aid for colleges and universities. The law allocated a certain amount of funds to all colleges that participate in federal student aid programs, through a funding formula based on the number of students receiving federal financial aid through Pell Grants and on overall institutional student enrollment.

The rules of the program direct that 50 percent of the funds be used as direct financial-assistance grants to students, with the remaining money used to cover costs incurred by the college or university related to the COVID-19 pandemic.

According to data from the Department of Education, even schools with the largest endowments were eligible to receive millions of dollars under the program. In order to access the funds, all institutions were required to sign and return a "Certificate of Funding and Agreement."

As of the middle of this week, an Education Department official told Fox News that 2,960 institutions had applied for the student emergency grant funding and that the agency had already sent funds to 318 of them. The awards sent to the universities, as of Wednesday afternoon, totaled $751 million.

The official also told Fox News that 137 universities and colleges, thus far, have applied for the institutional half of the funding.

Education Secretary Betsy DeVos, though, said this week that while the program makes all universities and colleges eligible for the funds, no matter their financial situation, those schools with large endowments should not apply and Congress should change the law.

"Wealthy institutions that do not primarily serve low-income students do not need or deserve additional taxpayer funds. This is common sense," DeVos said. "Schools with large endowments should not apply for funds so more can be given to students who need support the most. It's also important for Congress to change the law to make sure no more taxpayer funds go to elite, wealthy institutions."

Harvard University, according to 2019 data, has the nation's largest endowment valuing nearly $40 billion. The university had vowed to give all $8.6 million of federal funding to students “facing urgent financial needs” before declining the funding entirely under pressure from President Trump.

Yale University, which has the second-largest endowment of nearly $30 billion, said this week that it would not accept the $6.9 million available to the university.

“Though Yale is experiencing great budgetary pressure as a result of the pandemic, the university has decided not to seek these emergency funds,” Yale said in a statement Wednesday. “Instead, we hope that the Department of Education will use Yale’s portion of the funding to support colleges and universities in Connecticut whose continued existence is threatened by the current crisis.”

The university reassured Yale students that “this decision will in no way diminish our financial support for them at this critical time.”

Stanford University, which has the third-largest endowment of nearly $27 billion, followed suit, asking that the Department of Education rescind its application for $7.3 million in coronavirus aid.

Princeton University, which has an endowment of $25 billion, also said this week that they would not accept the millions of dollars in assistance, and noted that they “did not request these funds” to begin with.

The University of Pennsylvania, whose endowment values at more than $13 billion, also said they would not apply for the stimulus funding.

A Notre Dame spokesperson told Fox News on Friday that the university has "not yet applied for such funding," but if they did, the university "would use it exclusively for eligible students whose families were hit hardest by unemployment or otherwise upended by the coronavirus." The school is eligible for a total of $5.7 million.

A Columbia University spokesperson told Fox News on Friday that the university "has not yet decided whether to accept funds allotted to the University under the CARES Act."

"We are evaluating whether the legal and regulatory requirements governing the funding make it possible for us to accept it," the spokesman told Fox News. Columbia is eligible for $12.8 million.

And MIT, in a statement to Fox News on Friday, said the university did not apply for the $5 million in coronavirus relief funds through the "Certificate of Funding and Agreement" and was still weighing whether to apply.

"MIT senior leaders are still reviewing information from the government, considering the range of needs facing our students, and determining how best to proceed," an MIT spokesperson said.

It is unclear, at this point, whether the other universities will shun the funds.

Texas A&M and the University of Michigan did not immediately respond to Fox News’ request for comment on Friday.