Sen. Kamala Harris on Tuesday said she applauds Los Angeles Mayor Eric Garcetti’s move to slash funding for police by approximately $150 million amid the “defund the police” movement and called for “investing” to make communities “healthy and safe.”

Harris, D-Calif., has yet to explicitly say whether she supports or opposes the “defund the police" movement, but touted Garcetti’s announcement.

“I support investing in communities so that they become more healthy and therefore, more safe,” she said. “Right now, what we’re seeing in America is many cities spend over one-third of their entire city budget on policing, but meanwhile, we’ve been defunding public schools for years in America.”

“We’ve got to reexamine what we’re doing with American taxpayer dollars and ask the question, are we getting the right return on our investment? Are we actually creating healthy and safe communities?” she continued. “And that’s a legitimate conversation and it requires a really critical evaluation.”

Garcetti oer the weekend said he plans to make cuts up to $150 million to the city’s police department and redistribute the money to “black communities and communities of color.”

Garcetti’s move came after Minneapolis’ left-leaning City Council members on Sunday announced a veto-proof push to disband the Minneapolis police, even as the mayor made clear he does not support abolishing the department. 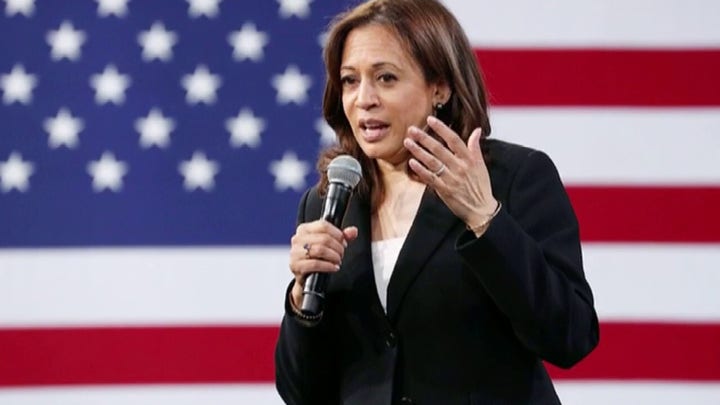 Harris, like many Democrats, has avoided explicitly offering support or opposition to the “defund the police” movement.

Harris was also asked on Monday on ABC’s “The View,” where she avoided directly answering whether she backs the movement.

“We need to reimagine how we are achieving public safety in America,” she said. Cities that direct “one-third of the budget to police” instead of “public schools, job training and job creation—come on. We have to be honest with this," the senator noted.

Presumptive Democratic presidential nominee Joe Biden initially was mum on the issue, but on Monday afternoon his campaign released a statement saying he “does not believe that police should be defunded.”

Later Monday, Biden, during an interview with CBS News, addressed the issue personally.

“I don’t support defunding the police,” he said. “I support conditioning federal aid to police based on whether or not they meet certain basic standards of decency, honorableness, and in fact, are able to demonstrate they can protect the community, everybody in the community.”

Other vocal opponents of the movement include Sen. Cory Booker, D-N.J., and Rep. Karen Bass, D-Calif., the leader of the influential Congressional Black Caucus.