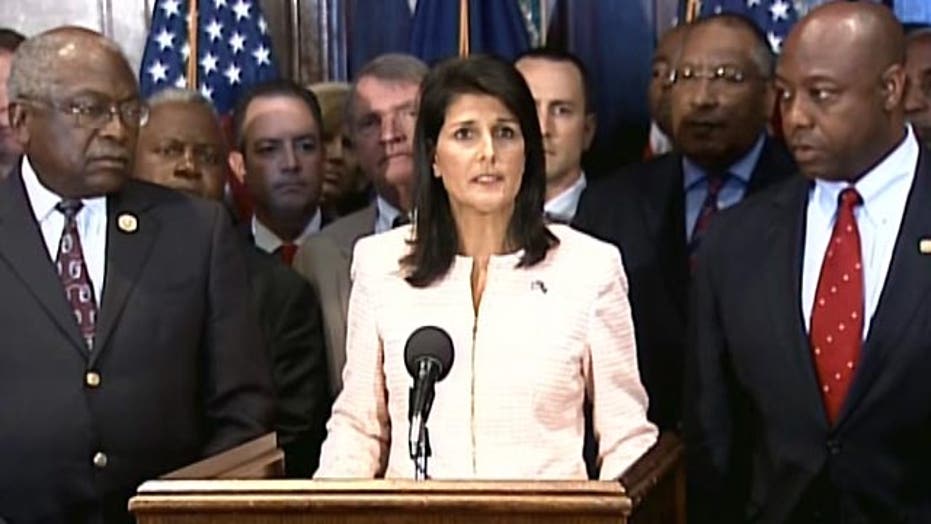 Governor says flag does not represent the future of South Carolina

South Carolina GOP Gov. Nikki Haley’s response to the Charleston massacre, highlighted by her call to remove the Confederate flag from statehouse grounds, has thrust her back into the national spotlight and re-ignited talk about what role she might play in the 2016 race.

Not only is Haley poised to be a powerful surrogate, there's already chatter that she could make a solid Republican vice presidential candidate.

Haley has been a high-profile Republican since she won the governorship as part of the 2010 Tea Party wave.

But her call to remove the Confederate battle flag after a white male fatally shot nine black people June 17 inside an historic African-American church in Charleston, S.C., has Republican presidential candidates, political observers and others suggesting her leadership in the aftermath shows she could be a pivotal player in the presidential race.

In addition, the Republican National Committee, South Carolina's U.S. senators and several of the GOP White House candidates have followed Haley in calling for the flag's removal, amid many Southerners’ belief that the flag is part of their heritage, not a symbol of white supremacy.

Haley, an Indian-American and the state’s first female governor, insists her call to remove the flag was deeply personal and beyond politics, repeatedly telling reporters she couldn’t “look her children in the face” while allowing the flag to fly.

But in a presidential campaign season, the political implications are unavoidable.

Juleanne Glover, who has worked on Republican presidential campaigns for Arizona Sen. John McCain and Steve Forbes and is now a senior adviser for the international firm Teneo Strategy, agrees that Haley could be a top vice presidential pick.

But she also argues Haley could play a far bigger role in the White House race that would begin much earlier than when candidates pick a running mate in summer 2016.

Glover suggested Tuesday that Haley’s backing and physical presence at campaign stops across early-voting South Carolina could make or break a candidate’s White House bid and that her voice on such topics as women’s issues, education reform and long-term immigration policy could “create a platform for 2016.”

“She could play a pivotal role in all of these issues and in the future of the party,” Glover said. “She’s an American success story with a biographical narrative that lends itself to a larger, inspirational story. Friends who know her well have always been evangelical about her potential. They are not surprised.”

The decision by Haley, an elected official, to end her previous support for the flag, which was moved from atop the state capitol dome in 2000, indeed put her at the forefront of the issue.

However, she was not the first high-profile Republican to speak out.

Haley made the announcement, amid mounting public outcry, five days after the incident and three days after 2012 GOP presidential nominee Mitt Romney and 2016 GOP candidate Jeb Bush called it a symbol of racism.

Within the crowded GOP field, New Jersey Gov. Chris Christie, Kentucky Sen. Rand Paul and South Carolina Sen. Lindsey Graham support the flag being taken down, while Huckabee and former Pennsylvania Sen. Rick Santorum have not taken a specific public stance. The field is expected to swell to 16 candidates.

As a female and a minority official, the 43-year-old Haley indeed has the potential to become a major figure in the new guard of the Republican Party.

But some political observers suggest she is still a work in progress.

Haley was elected last year to a second term with roughly 56 percent of the vote, the largest margin of victory for a South Carolina gubernatorial candidate in 24 years. But she won in an overwhelmingly Republican state and would likely need to broaden her appeal to be selected as a running mate.

In addition, the former state legislator, who has an accounting degree from Clemson University, has largely focused on job growth and state economic development and less on race and women’s issues.

And she has occasionally clashed with Democrats and Republicans alike in the state legislature.

Haley upset black Democrats in part over her refusal to expand Medicaid under ObamaCare and for supporting a state voter-identification law they consider discriminatory.

However, the week before the Charleston church killings, Haley signed into a law a bill requiring police officers to wear body cameras that was championed by  Democratic state Sen. Clementa Pinckney, killed while leading a bible study inside the church.

She also got support from Pinckney, an ardent progressive, for an economic-development plan to dredge the Savannah River.

Still, College of Charleston political Professor Kendra Stewart said Haley has perhaps an even more “contentious” relationship with the GOP-controlled legislature, with which she has clashed over spending, ethics reform and state agency control.

Stewart said Haley also has offended assembly leaders by criticizing them publicly and vetoing their legislation, which has resulted in efforts to override her vetoes.

Glover thinks Haley has had to battle with the old guard in both parties to achieve her political goals but acknowledges “some of the legislative tussles have not always helped burnished her image.”

Another big issue is simply the political calculations of picking any vice presidential candidate -- which includes such factors as the Democrats’ presidential nominee and whether the GOP nominee is, for example, a strong conservative or more of a moderate who would gain wider appeal with somebody like Haley.

Stewart suggests that Haley’s odds increase if Hillary Clinton wins the Democratic nomination or if an East Coast moderate like Christie is the Republican choice.

“If Clinton wins, it would be wise for Republicans to have a female or non-white male on the ballot,” Stewart said. “She’s very appealing to the Republican Party’s more conservative base. She would add some strength to that part of the ticket.”