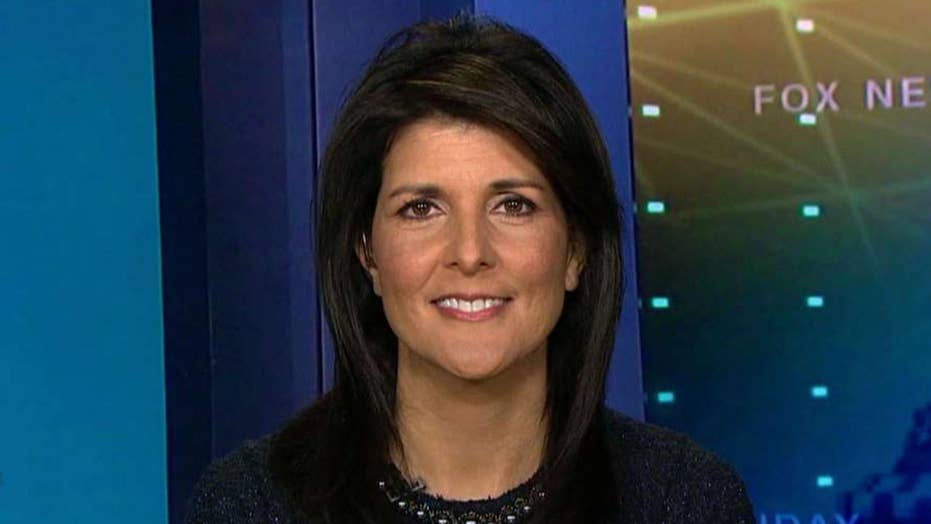 U.S. ambassador to the United Nations discusses President Trump's decision to recognize Jerusalem as the capital of Israel.

Nikki Haley, the U.S. ambassador to the United Nations, on Sunday defended President Trump’s announcement to move the American Embassy in Israel to Jerusalem and recognize the holy city as Israel’s capital -- arguing the move should “fastball” the Middle East peace process while warning that the international “bashing” of Israel is hurting such efforts.

“We think this is actually going to help us fastball the peace process going forward,” Haley told Chris Wallace during “Fox News Sunday.”

The announcement by Trump on Wednesday to move the embassy from Tel Aviv and to recognize Jerusalem as Israel’s capital roiled much of the international community -- including the Palestinians, whose seat of government is in east Jerusalem.

The U.S. announcement was also widely criticized by the 14 other members of the U.N. Security Council, during an emergency meeting Friday, which seems in part why Haley on Sunday continued to defend Israel, one of the United States’ closest and strongest allies.

“There have been repeated attempts to hit Israel, for no reason whatsoever,” Haley said. “[The UN’s] Israel-bashing sessions, constantly trying to find ways to pick at them. … But I want the Security Council and all of the international community to understand, when you bully Israel, you are not helping the peace process. … We’re not going to put up with it anymore.”

Trump’s announcement is considered by many a major departure from decades of U.S. foreign policy on Jerusalem, which is essentially to stay neutral on the issue. It also fulfills a big Trump campaign promise to move the U.S. Embassy to the holy city. And it is a major part of the Trump administration’s agenda to bring about Middle East peace.

'We will respect anything that the two parties come together on.'

On Sunday, Alyssa Farah, press secretary to Vice President Pence, announced he would be traveling to the Middle East.

"The president has asked Vice President Pence to go to the region to reaffirm our commitment to work with partners throughout the Middle East to defeat radicalism that threatens the hopes and dreams of future generations. The Vice President very much looks forward to traveling to the region to meet with Prime Minister Netanyahu and President el-Sisi. It's unfortunate that the Palestinian Authority is walking away again from an opportunity to discuss the future of the region, but the administration remains undeterred in its efforts to help achieve peace between Israelis and Palestinians and our peace team remains hard at work putting together a plan."

Haley on Sunday also insisted that the U.S. will “treat the Palestinians and Israelis fairly” and will allow the sides to reach their own peaceful solution.

“We will respect anything that the two parties come together on,” she said.