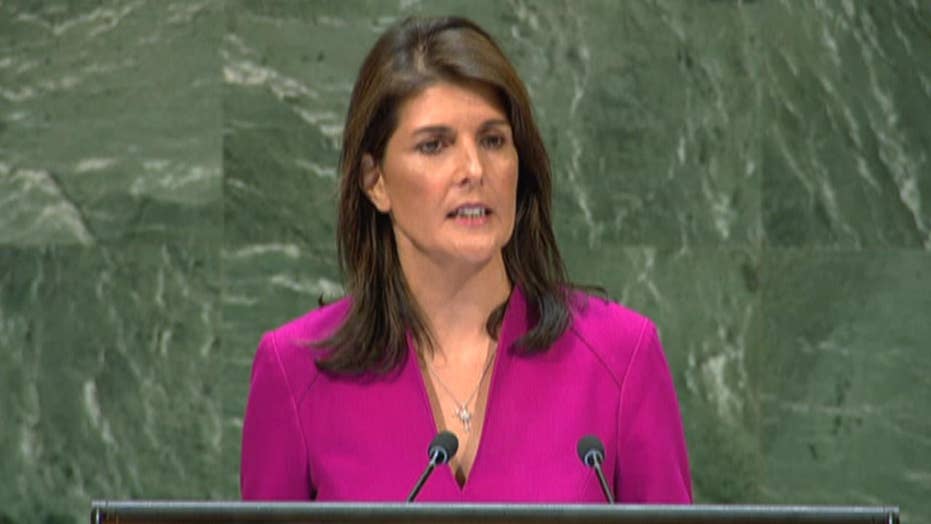 Haley on opposition to US Cuba embargo: We won't back down

U.S. Ambassador to the United Nations Nikki Haley on Thursday pushed back against condemnation from the U.N. over the U.S. embargo against Cuba, criticizing the body for failing to condemn human rights abuses in the communist country, and promising that the U.S. “won’t back down” in its support for freedom in Cuba.

Haley spoke in the U.N. General Assembly on the second day of debate on a resolution calling for ending the U.S.' economic, commercial and financial embargo against Cuba. The vote is now an annual tradition at the U.N., where Israel and the U.S. are the only countries to vote against the resolution. That tradition was repeated Thursday, where the resolution condemning the embargo passed 189-2 to applause from the chamber.

In her remarks ahead of the vote, coming after a lengthy list of speakers lined up to condemn the U.S., Haley said the resolution would not help a single Cuban family or feed one Cuban child, and defended the decades-long embargo.

“Our reason for the embargo is and has always been Cuba’s denial of freedom and the denial of the most basic of human rights for the Cuban people,” she said. “The United States will continue to stand with the Cuban people until their rights and their freedoms are restored. Period. We won’t back down.”

Haley also accused countries of acting from anti-U.S. bias rather than from concern for the Cuban people: “It’s one more time that countries feel they can poke the United States in the eye. But you’re not hurting the U.S. when you do this. You are literally hurting the Cuban people by telling the regime that their treatment of their people is acceptable."

After the vote, Haley said that "there are no winners here today, only losers."

"The U.N. has lost, it has rejected the opportunity to speak on behalf of human rights,” she said.

This year it went a step further, introducing amendments that call out human rights abuses, and call upon the regime to abide by human rights norms. One urged Cuba “to fully grant its citizens internationally recognized civil, political, and economic rights and freedoms, including freedom of assembly, freedom of expression, and free access to information.” Another amendment urged Cuba "to release persons arbitrarily detained for the legitimate exercise of their human rights, to consider rescinding unduly harsh sentences for exercising such fundamental freedoms and to end reprisals against individuals, including for cooperating with the United Nations human rights mechanisms."

Those amendments, however, were overwhelmingly shot down. Only Ukraine voted in support of all the amendments with Israel and the U.S. Between 65 and 67 nations abstained, and the remaining countries voted against. The Canadian ambassador said its vote was not against the substance of the U.S. amendments but it was voting against them because the resolution was not "a suitable platform" to consider Cuba's respect for its human rights obligations.

A U.S Mission official told Fox News that the votes showed why the embargo is necessary: "Other countries and the U.N. cannot be counted on to do anything about Cuban human rights. Only the U.S. will do it. Today's votes proved that."

The debate was peppered with ambassadors -- many from countries with poor human rights records -- stepping up to the podium to condemn the U.S. in strong terms and at length. Cuban Foreign Minister Bruno Rodriguez accused the U.S. of “flagrant and massive systematic violation of the human rights of Cuban men and women.” The Iranian ambassador accused the U.S. of violating the U.N. Charter and international law, describing the embargo as the “most unjust and longest unilateral sanctions against a country in modern world history.” He was applauded by the chamber, as were the representatives for Syria and Venezuela. Haley’s remarks were met with silence.

The representative for Bolivia on Wednesday told the chamber that Cuba was an example of “dignity and unwavering strength” in the face of what he called a “criminal embargo.” He said the Trump administration’s stance as “an abhorrent relic of the Cold War and an egregious example of unilateral, illegitimate sanctions.”

A number of countries said they regretted the abandonment of the Obama-era thaw. The representative for Egypt said that the thaw was a step in the right direction, but was ultimately “inadequate.” Austria, speaking on behalf of the E.U. expressed hope that lifting the embargo would open up the Cuban economy.

But Haley dismissed the idea that continuing the Obama thaw policy would encourage the Cuban dictatorship to grant more freedoms to its people.

“Supporters of the resolution claim that a change in U.S. policy would somehow transform life for the Cuban people. But the government of Cuba doesn’t agree. It responded to the softening of our Cuba policy under President Obama with more, not less, political repression of its people,” she said.

The resolution is the latest spat between the U.S. and Cuba at the U.N. Last month, Haley called for the U.N. to take action against the Bolivian and Cuban delegations after diplomats disrupted a U.S. event drawing attention to the plight of political prisoners in Cuba -- and damaged property in the process.

National Security Adviser John Bolton, himself a former U.N. ambassador, was due to speak Thursday afternoon in Miami about U.S. policy in Latin America.