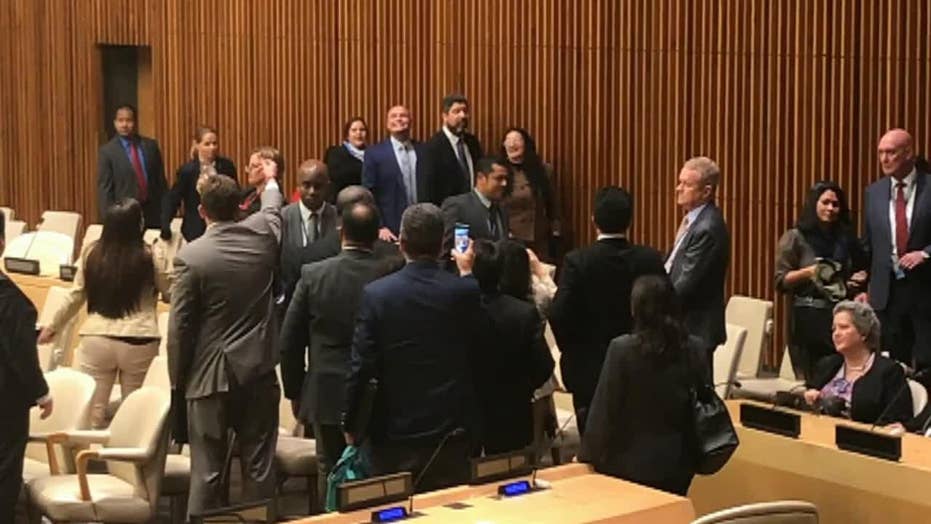 In this raw video, diplomats bang on desks and yell during a meeting dedicated to the plight of Cuba's political prisoners.

The Trump administration next week will counter a U.N. resolution condemning the U.S. embargo against Cuba with a series of amendments calling out the communist regime’s human rights record, Fox News has learned -- the latest example of the U.S. going on the offensive at the world body.

The U.S. on Wednesday is expected to put forward several amendments to balance the U.N. General Assembly’s annual condemnation of the U.S. embargo on Cuba. It's part of an effort to explain why the embargo against the Cuban dictatorship exists and challenge the more than two-decade annual vote condemning the embargo.

The amendments call upon the regime to abide by human rights norms, expresses concern about freedom of expression and the plight of political prisoners. One calls on Cuba “to fully grant its citizens internationally recognized civil, political, and economic rights and freedoms, including freedom of assembly, freedom of expression, and free access to information” -- all values supposedly at the heart of the U.N., but values that some critics say the body only upholds selectively.

The U.S. policy marks an escalation from last year, when the U.S. voted against the resolution. That was, itself, a reversal of the policy under former President Barack Obama, where the U.S. merely abstained on the U.N. resolution.

It also marks the continuation of a policy by which the U.S. inserts amendments into resolutions that contradict U.S. policy.

It is unclear whether the U.S. policy will bring many on board -- where the U.S. is frequently a pariah. Last year only Israel voted with the U.S. out of the 193-member body against the Cuban resolution. General Assembly resolutions are not legally binding, but do carry symbolic weight, and can be used as a cudgel by U.S. opponents to condemn the U.S. over a controversial policy.

It was former President Dwight Eisenhower’s administration that first slapped a trade embargo on Cuba after Fidel Castro nationalized many private companies. In 1962 Congress passed its first of several acts that further isolated the communist Caribbean island.

While President Obama attempted to re-establish diplomatic relations, the Trump administration has sort to undo that stance, pointing to the regime’s abuse of human rights.

Cuba’s foreign minister Bruno Rodriguez told reporters at a press conference in Havana this week that the U.S. amendments were, “a political maneuver,” that he said was trying to erode the strong international support Cuba has received over the years during the vote on the US embargo.

A U.N. diplomat told Fox News that while they the body shared U.S. concerns about human rights in Cuba, there were questions about the most effective way to promote that cause.

But, despite the frosty reception from some at the U.N., the U.S. under the Trump administration has refused to back down in its stance toward Cuba at the U.N. 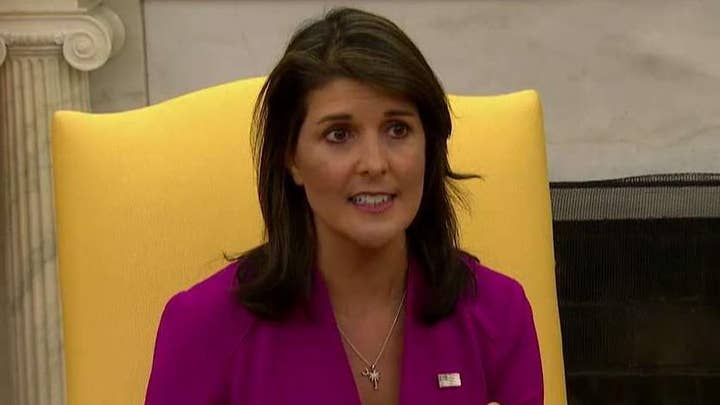 Last week, Ambassador Nikki Haley wrote to Secretary General Antonio Guterres calling for Cuba to be punished for its role in disrupting a U.S. event at the U.N. drawing attention to the plight of political prisoners in Cuba. Haley demanded in particular that the Cuban delegation be billed for damage to U.N. property when delegates banged tables as part of what she described as a “mob scene.”

“Cuba’s U.N. delegation destroyed property with their juvenile, unprofessional behavior that was a mockery of diplomacy,” Haley said in a statement to Fox News. “There’s no way the U.N. should pay for those repairs – with U.S. taxpayers footing 22 percent of that bill. The bill needs to be sent directly to Cuba.”