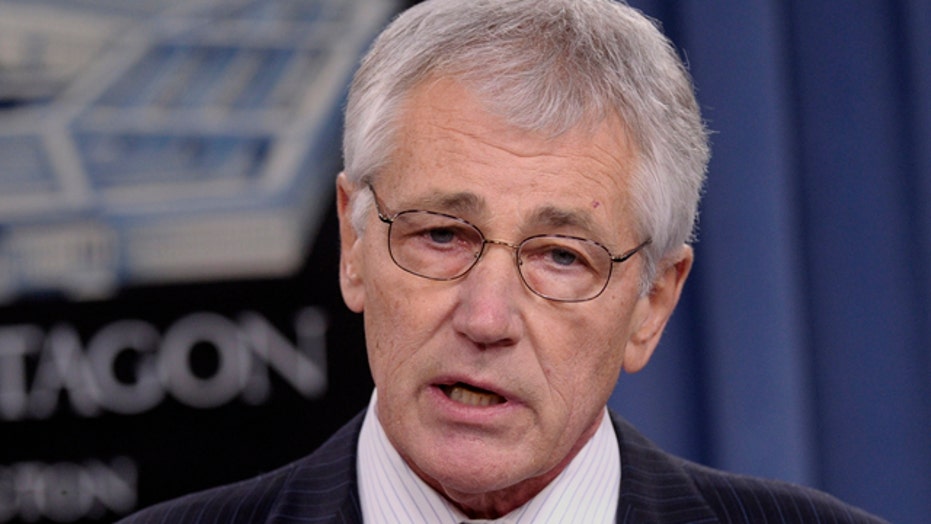 Defense Secretary Chuck Hagel called Monday for shrinking the U.S. Army to its smallest size in decades, along with other cuts, drawing criticism that the drastic changes will hurt U.S. security.

Hagel announced his Pentagon budget priorities Monday afternoon. The Army had already been preparing to shrink to 490,000 active-duty members from a wartime peak of 570,000. Hagel is proposing to cut it further to between 440,000 and 450,000.

That would make it the smallest since just before the U.S. entered World War II.

"We are repositioning to focus on the strategic challenges and opportunities that will define our future: new technologies, new centers of power, and a world that is growing more volatile, more unpredictable, and in some instances more threatening to the United States," Hagel said at a press conference at the Pentagon.

He defended the proposed reductions in troop strength, as a trade-off for building up "technological superiority" and priorities like Special Operations Forces and "cyber resources."

Rep. Michael McCaul, R-Texas, chairman of the House Homeland Security Committee, warned that the cuts would hurt military readiness. And he said the country is only in this position because the Obama administration and Congress will not seriously take on cuts to entitlements.

"It's all being sacrificed ... on the altar of entitlements. This president cannot take on mandatory spending, so all we've done in the Congress -- and this president -- is basically cut discretionary spending," he told Fox News.

Navy Rear Adm. John Kirby, the Pentagon press secretary, said Monday that Hagel consulted closely with the military service chiefs on how to balance defense and budget-saving requirements. "He has worked hard with the services to ensure that we continue to stand for the defense of our national interests -- that whatever budget priorities we establish, we do so in keeping with our defense strategy and with a strong commitment to the men and women in uniform and to their families, Kirby said.

"But he has also said that we have to face the realities of our time. We must be pragmatic. We can't escape tough choices. He and the chiefs are willing to make those choices," Kirby said.

The New York Times first reported on the proposed cuts. The changes reportedly would leave the military capable of waging war, but unable to carry out protracted occupations of foreign territory, as in Afghanistan and Iraq.

Officials told the Times that Hagel's plan has been endorsed by the Joint Chiefs of Staff. It calls for the Navy to maintain all 11 of its aircraft carriers currently in operation. However, the budget proposal mandates the elimination of the entire fleet of Air Force A-10 attack aircraft, as well as the retiring of the U-2 spy plane, a stalwart of Cold War operations.

The budget plan does keep money for the F-35 warplane, a project which has been beset by delays and criticism over design flaws.

Other characteristics of the budget will likely draw further ire from veterans groups and members of Congress. The Wall Street Journal reported Friday that Hagel would recommend a limit on military pay raises, higher fees for health-care benefits, less generous housing allowances, and a one-year freeze on raises for top military brass.

"This is a real uphill battle with Congress," Mieke Eoyang, director of the National Security Program at Third Way, a centrist think tank in Washington, told the Journal.

"God bless [Hagel] for trying to get a handle on these costs," she said. "But in this political environment, in an election year, it's going to be hard for members of Congress to accept anything that's viewed as taking benefits away from troops."