Sen. Harris vows to indict Trump if elected in 2020; reaction and analysis on 'The Five,'

Fox News' host Greg Gutfeld dismissed Democratic presidential candidate Kamala Harris' comments saying her DOJ would have "no choice" but to prosecute President Trump comparing her to a desperate man trying to meet women at a bar.

"That's what candidates are like right now. They are the desperate guy at the bar who will say anything to get your number. It's just to get some kind of media spotlight. And they are not trying to appeal to America. Because America doesn't care," Gutfeld said on "The Five" Wednesday.

Sen. Harris, D-Calif., in a newly released NPR interview, said she believes the only reason former Special Counsel Robert Mueller did not recommend prosecuting Trump was because of the Justice Department’s policy against indicting a sitting president. The senator said that once out of office, Trump would be subject to charges and that the DOJ should pursue them.

“I believe that they would have no choice and that they should, yes,” Harris said on the NPR Politics Podcast.

"The Greg Gutfeld Show" host said he "didn't believe" Harris and pointed out that Democratic presidential candidates are "being tricked" into taking hard-left points of view. 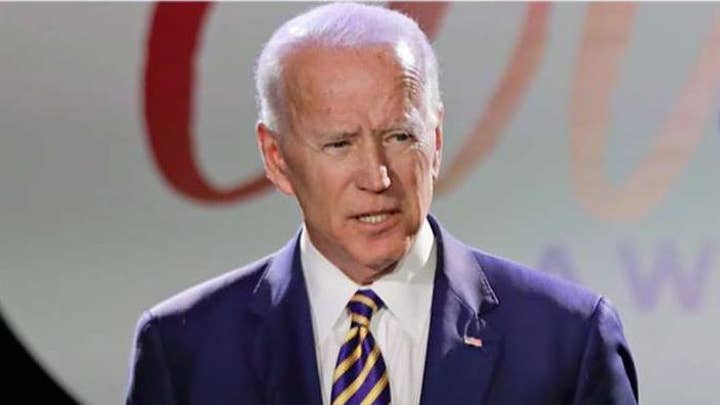 "They're being tricked into thinking there is no lane for moderates. Like everybody has to go this way and actually, America actually likes a moderate. You don't have to be a rabid flame thrower. I don't believe her for a second. It's interesting that she has to do this because she is not taking off. And I thought that she would have taken off," Gutfeld said.

Fox Business' Kennedy added that she wished Mueller "picked a side" so that everyone could move on from the issue.

"Do you know what would have been nice if we weren't left in this expanded gray area which is what the Mueller report gave us. I really do wish he would have picked a side and I wish he would have pressed the issue," Kennedy said.  "And if the president had done something so bad that was chargeable, if it were a civilian, then he should have put that in there."