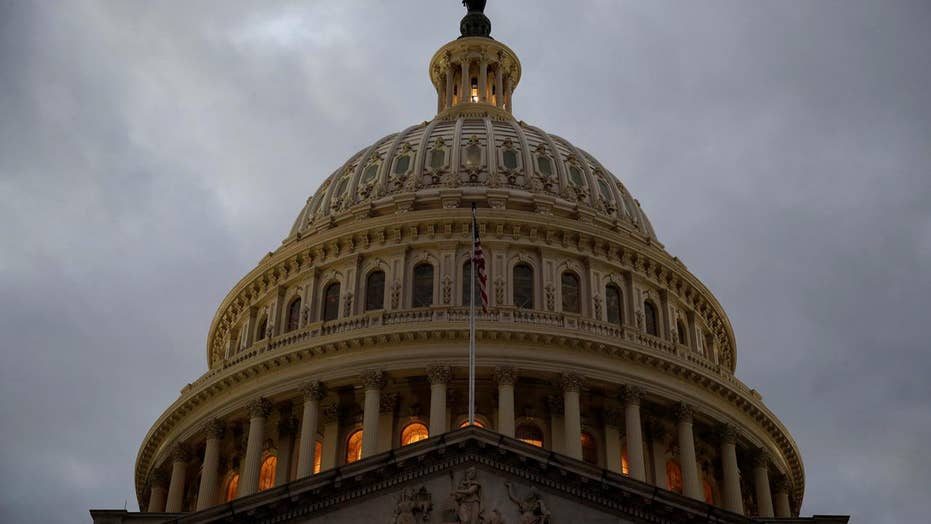 House Judiciary Committee member Rep. Jim Jordan (R-Ohio) reacts to the massive market sell-off and how it may impact Congress’ attempts to pass a spending bill.

No, this isn’t some trade the Washington Capitals made last year with the St. Louis Blues for defenseman Kevin Shattenkirk.

You may know “caps” as “sequestration.” The task now facing Congress is how to avoid another government shutdown and forge a deal to ditch the restrictions that hindered federal spending for years. The lack of an accord on spending caps could determine whether the government shutters later this week. A caps deal appears linked to the Democrats' demand to settle DACA.

In the summer of 2011, Congress struggled to raise the debt ceiling, the limit on how much red ink the government can carry. Enter “sequestration,” a set of mandatory, arbitrary spending reductions – or “caps.”

The Congressional Budget Office (CBO) just made an ominous warning that lawmakers must again take yet another onerous vote to raise the debt ceiling in early March. It was thought a few weeks ago that Congress may have until the end of next month to wrestle with the debt limit. But the CBO warns that Treasury could run out of cash and “the government would be unable to pay its obligations fully.”

The GOP’s tax bill, estimated to plunge the government into debt by an addition $1.5 trillion, expedited the call for an earlier debt ceiling increase.

A failure to act could rattle the stock and bond markets. That’s a problem considering the freefall on Wall Street of late.

For years Washington raged about “slashing spending.” Now the rage is untangling spending caps so Congress can spend more.

Is another government shutdown looming? (AP)

The federal government spends about $4.1 trillion a year. There are two types of federal expenditures: “mandatory” spending and “discretionary” spending. Mandatory spending makes up nearly 70 percent of the government’s $4.1 trillion. Washington devotes most of that to entitlements like Medicare, Medicaid and Social Security. Thanks to laws passed years ago, that money streams out of the door unchecked by the current Congress. Lawmakers could rein that back in if they wanted to, but they don’t. The rest of the money is “discretionary.” Discretionary spending is devoted to the 12 annual spending bills that fund the government. The federal government shuttered a few weeks ago and faces another potential closure because Congress and the president failed to approve any of the 12 appropriations bills.

There’s deadlock on everything.

Lawmakers from both parties want to secure a “caps” deal, ending nearly seven years of sequestration. Defense hawks are pushing for $80 billion in additional money for the Pentagon. Military spending is by far the largest chunk of discretionary spending (better than half). Therefore, the sequestration caps hit the Pentagon the hardest. That’s why defense hawks are outraged when there are Navy accidents, planes that can’t fly and breaks in training.

Democrats are willing to deal. They’re for lifting the sequestration caps. But Democrats insist on an increase in $40-45 billion in spending hikes for the 11 other sections of discretionary spending.

Senators try to find common ground after the shutdown

Republicans involved in trying to come up with an immigration deal say Schumer is trying to save face by taking the border wall off the table; Mike Emanuel explains on 'Special Report.'

One side of the equation won’t move without the other. And the Democrats won’t act on much of anything until they secure a DACA package.

It’s not hard to understand the level of difficulty to secure a caps agreement. Consider the original table from the 2011 law that spelled out how much sequestration would permit Congress to allocate to the military in fiscal 2018: $603 billion. It climbs to $616 billion in fiscal 2019. In late January, Fox News learned that President Trump intends to submit to Congress a budget request which balloons defense spending to a staggering $716 billion.

There’s no way the administration gets anything close to that unless they unwind the sequestration budget caps.

You thought Groundhog Day was last week. Try this week. On Monday, House Republicans released yet another interim spending bill. This is the fifth consecutive emergency spending plan. It’s like the Bill Murray movie where the days play on a loop. And get this: the latest bill funds the government for -- you guessed it -- six weeks.

Did members of Congress emerge from the Capitol basement and see their shadow or something?

Lawmakers are tired of the fiscal déjà vu.

“Why is it going to get better with time?” asked one senior House Republican about the stopgap plan. “It’s not like wine.”

A number of lawmakers wonder why GOP leaders didn’t forge a deal while at their three-day issues retreat last week in West Virginia.

“We have these wonderful, ‘rah-rah’ meetings about an agenda and then we don’t talk about the two things we have to address: spending and immigration,” complained one Republican.

The new plan will bolster defense spending. That will court defense hawks to vote yes. Democrats will oppose the plan because there’s still no DACA pact. The Senate is likely to strip out extra defense spending and send it back to the House.

How will it pass then?

That would solve a lot of things. But by Thursday?

Otherwise, there’s no agreement. Punxsutawney Phil certainly can’t help. And with no solution, members of Congress may look as confounded as a kid at the Super Bowl when Justin Timberlake comes loping up the aisle.