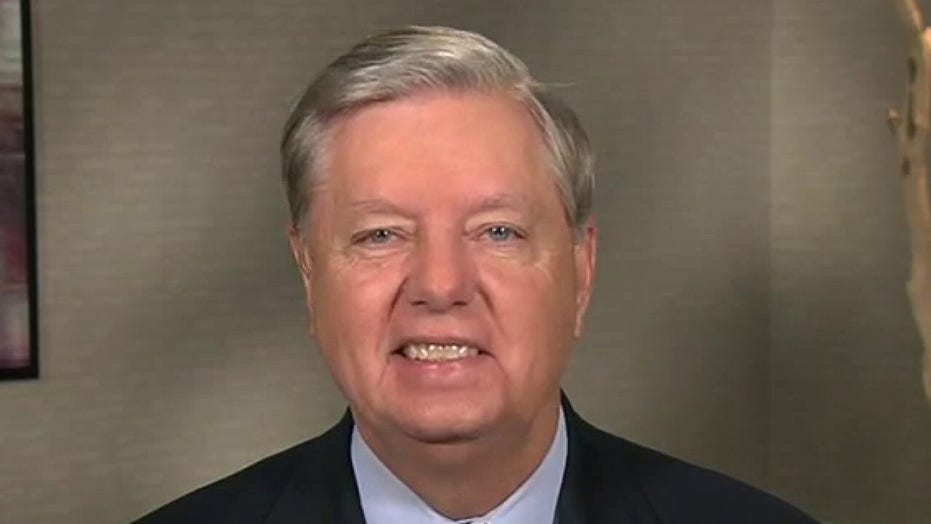 Sen. Graham: Sub-source said most of Steele report was hearsay

Senate Judiciary Committee Chairman Lindsey Graham said on "Sunday Morning Futures" that the FBI deceived his counterparts in the Senate Intelligence Committee during a 2018 interview on the investigation into Russian election interference, citing a newly released document he obtained through the Department of Justice.

According to Graham, R-S.C., the Senate Intelligence Committee in 2018 called the FBI to testify on the reliability of the notorious Steele Dossier. The dossier was pivotal to the Foreign Intelligence Surveillance Act (FISA) warrants the bureau obtained for former Trump aide Carter Page as part of its "Crossfire Hurricane" investigation into Russian election interference.

The senator said that the FBI told the committee there was no reason to doubt the dossier and the primary subsource that ex-British spy Christopher Steele used to put together the dossier, despite the fact the source had previously said that the dossier mischaracterizes the information he gave Steele.

In one line, in the document released Sunday, the FBI said that "[a]t minimum, our discussions with [the primary subsource] confirm that the dossier was not fabricated by Steele."

Graham added: "Actually, the subsource said it was all bar talk, hearsay, speculation and conjecture, and the whole sexual activity of the president was made in jest. So they completely misrepresented to the Senate Intel Committee in 2018 what the subsource had told the FBI in 2017."

A statement from former CIA Director John Brennan in the Senate report said that "[i]nitially the FBI wanted it incorporated into the assessment itself." Brennan continued that the CIA did not want to incorporate the intelligence but that "Jim Comey made a very strong case, which we didn't object to, that it needed to accompany the assessment because it was related to the issue, and we didn't know where the FBI's investigation was as far as some of those things."

But Graham Sunday railed against the FBI for allegedly misrepresenting what the Steele subsource told it in 2017 to the intelligence committee a year later. He said people should be prosecuted over it.

"Somebody needs to go to jail for this," Graham said. "This is a second lie. This is a second crime. They lied to the FISA court. They got rebuked, the FBI did, in 2019 by the FISA court, putting in doubt all FISA applications ... a year before, they're lying to the Senate Intel Committee. It's just amazing the compounding of the lies."

Graham said that he was not sure who specifically briefed the Senate Intelligence Committee on the subsource, but swore he would write to current FBI Director Christopher Wray to get to the bottom of the situation.

"I'm gonna find out who did that briefing, and whoever it is, they're in trouble," Graham said.

"Sunday Morning Futures" host Maria Bartiromo also asked Graham his thoughts on the Senate's hearing this week with former Acting Attorney General Sally Yates. Graham said his impression was that former FBI Director James Comey has a growing list of problems, which Graham intends to ask him about.

"Everybody's throwing Comey under the bus," Graham said. "When I asked Sally Yates about the interview with Michael Flynn, orchestrated by Comey -- Was that okay? Was the proper? -- she said no, it was rogue."

He added: "So you've got Rosenstein, now Sally Yates, saying if they knew then what they know now they wouldn't sign the warrant application, which means they're running away from Crossfire Hurricane, they're dumping it all on Comey, and that's probably the right thing to do."