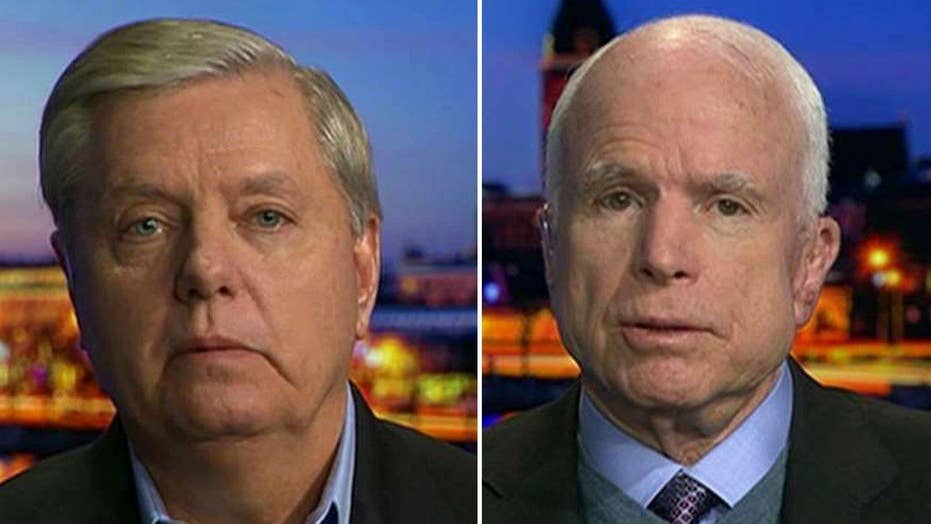 Republican senators explain how U.S. should respond to election hack on 'America's Newsroom'

Top Republican senators said Wednesday that the incoming Congress and President-elect Donald Trump should impose new and tougher sanctions on Russia for allegedly meddling in the 2016 presidential elections.

Arizona GOP Sen. John McCain told Fox News that he wants to increase sanctions on Russia, in addition to permanently stationing U.S. soldiers in the bordering Baltic countries and further helping neighboring Ukraine against Russian aggression -- to ensure Russian President Vladimir Putin knows “this kind of action in the future will be responded to.”

McCain, a Vietnam veteran and Senate Armed Services Committee chairman, spoke from Latvia on a tour of the Baltic nations with Sen. Lindsey Graham of South Carolina, a fellow Republican and retired Air Force pilot.

Graham outlined a more specific agenda and suggested Obama should end his presidency next month without taking action.

“Putin has cleaned his clock,” Graham said. “Here’s what I’d prefer: Let the new Congress and new president deal with Russia. … If I were President Trump, I’d call President Obama and say ‘Don’t start something that you cannot finish.' "

Graham, ousted by Trump from this year’s hard-hitting GOP presidential primaries, also told Fox News that he wants to put sanctions on Russia’s energy sector and on Putin and his inner circle to control their money and travel.

The senators’ call for sanctions follows news reports about the Republican-controlled House addressing the Russia hacking issue with a non-binding resolution, immediatley after being sworn in January 3.

Earlier Wednesday, The Washington Post reported that the Obama administration also wants to impose sanctions, in addition to a diplomatic censure and “covert action that will probably involve cyber-operations,” according to U.S. officials.

The officials also told the newspaper that the plan could be announced before the end of the week and that it attempts to revise a 2015 executive order on cyber-attacks to allow for a presidential response to influencing elections.

They also said the administration is working on a measure that Trump would not be able to undo.

U.S. officials have not denied the veracity of the Post story. And one told Fox News on Wednesday that there was “outrage” inside the U.S. intelligence community over the newspaper leak.

During this year’s election cycle, Democratic National Committee emails were hacked and leaked. And in the closing weeks of the race, WikiLeaks released troves of emails from the private account of John Podesta, the campaign chairman for Democratic presidential nominee Hillary Clinton.

Clinton and Podesta have said the leaked emails contributed to the campaign’s defeat and have pointed fingers at the Kremlin.

The U.S. intelligence community largely concurs that Russia was involved, while the Trump team continues to try to focus efforts on hiring for the administration.

President Obama in recent days has vowed to respond to the hacking.

McCain and Graham say they don’t think the email hacks determined the outcome of the Clinton-Trump race but argue 99 of Congress’ 100 senators think Russia was involved.