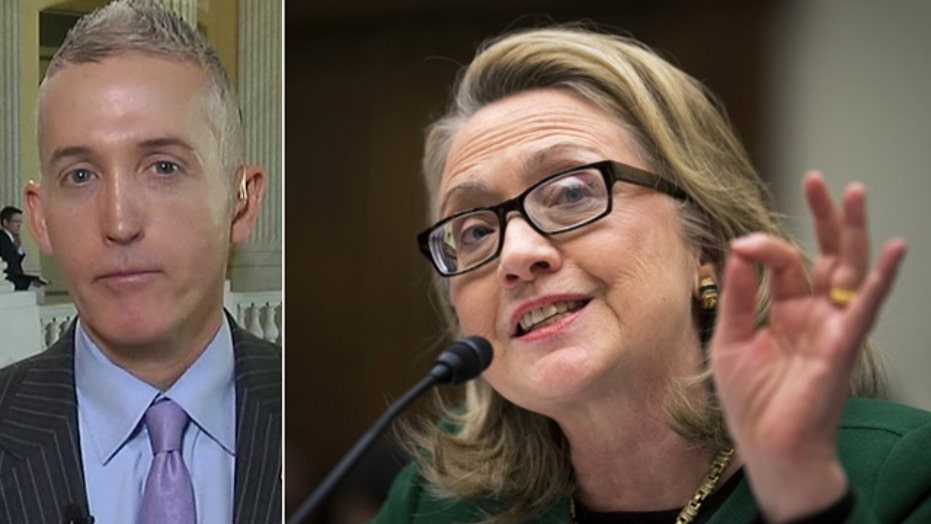 WASHINGTON – Rep. Trey Gowdy charged on Tuesday that the Obama administration is purposely slowing a congressional inquiry into the deadly 2012 terror attacks in Benghazi, Libya, and demanded greater cooperation from the State Department.

Gowdy, R-S.C., chairman of the House Select Committee on Benghazi, said the committee recently received 15,000 pages of documents but needs more time to go through all of it.

“We should be analyzing documents, not waiting for them to appear,” he said.

According to the State Department, those documents were first delivered over the summer.

As Gowdy pointed fingers at the administration for trying to hold up the investigation, Rep. Elijah Cummings, D-Md., said the panel was moving at a “glacial” pace and that Democrats “have grave concerns about the partisan path” the committee has taken.

Cummings claimed Gowdy is employing different standards for Republicans and Democrats and has held secret meetings with at least five witnesses.

The comments came as the committee held its third public hearing since its creation last May amid promises of bipartisanship and cooperation. Eight months later, the panel has devolved into finger pointing and accusations of political grandstanding and power plays.

In a letter last week, Cummings said Democrats were concerned about private meetings Gowdy held with witnesses, adding that it appears Gowdy has "withheld or downplayed information [from the witnesses] when it undermines the allegations we are investigating."

Gowdy said in response late Monday that he has the authority to unilaterally subpoena witnesses, but he promised to give Democrats a week's notice before issuing such a subpoena.

"Bipartisanship is a two-way street," Gowdy said in a letter to Cummings. "I have known you to be a fair partner and expect for that cooperation to continue."

The 12-member panel was created last May to investigate the September 2012 attacks on a U.S. post in eastern Libya that killed Chris Stevens, the U.S. ambassador, and three other Americans.

Gowdy and Cummings promised bipartisan cooperation and continued the bipartisan tone at hearings in September and December. Behind the scenes, the two men have disagreed sharply.

Gowdy's approach has also drawn criticism from some conservatives, who accuse him of failing to stand up to what they see as obstruction by the Obama administration related to the events in Benghazi, a topic that has been the subject of numerous congressional investigations.

A report by the House Intelligence Committee report last fall found that the CIA and the military acted properly in responding to the 2012 attacks. Debunking a series of persistent allegations hinting at dark conspiracies, the panel determined there was no intelligence failure, no delay in sending a CIA rescue team, no missed opportunity for a military rescue and no evidence the CIA was covertly shipping arms from Libya to Syria.

Cummings, who has clashed with Republicans such as Rep. Darrell Issa, R-Calif., over Benghazi and other issues, has previously praised Gowdy for a bipartisan approach to the Benghazi inquiry.

But he said in a letter sent Friday that he and his colleagues have grown increasingly concerned that they are being shut out by the GOP majority. Cummings cited a GOP-approved rule that allows Gowdy to meet privately with committee witnesses and unilaterally issue subpoenas for witnesses or documents "without any public discussion or debate, even if there is significant disagreement from other members of the committee."

He and other Democrats "simply ask for a public debate and a vote by committee members on these actions when there is significant disagreement," Cummings wrote.

The Jan. 23 letter is the third Democrats have sent to Gowdy since November. None of the letters had previously been made public.

In one letter, dated Nov. 24, Cummings told Gowdy the committee inquiry has "taken a sharp turn for the worse and is becoming what you strenuously insisted it would not - another partisan investigation of the Benghazi attacks that blocks Democrats from meaningful participation."

Rep. Adam Schiff, D-Calif., said he was "deeply skeptical" that the Benghazi committee would operate fairly, but nonetheless agreed to serve on the panel as one of the Democratic members.

"Now, after learning that we have been excluded from parts of the investigation, and that the majority has held secret interviews with key witnesses and withheld information. I fear this skepticism may have been all too justified," Schiff said.

He called on Gowdy to lay out the scope of his investigation immediately and adopt a set of rules "that will give Congress and the country the assurance that this will not be yet another politicized and partisan exercise at taxpayer expense."