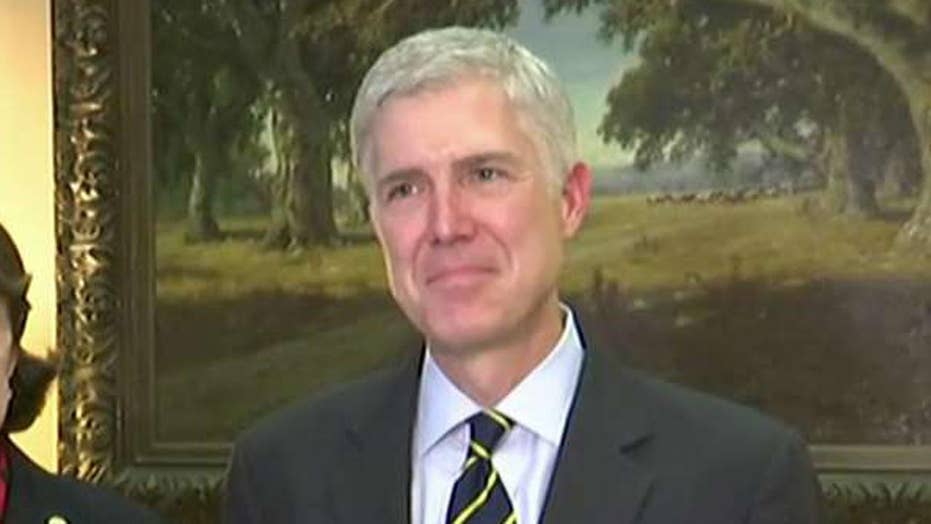 Senate Democrats respond to their meetings with Gorsuch

Senate Democrats preparing to grill Supreme Court nominee Neil Gorsuch at Monday’s confirmation hearing are likely to gloss over their past praise of the same justice.

More than a decade ago, many Democrats still in office now went along with Gorsuch as he was unanimously confirmed to the 10th Circuit Court of Appeals in July 2006.

Things are different today, ahead of his hearing for the highest court in the land.

Senate Minority Leader Chuck Schumer, D-N.Y., expressed deep doubts during a press conference last Wednesday about the nominee and asserted Gorsuch “may act like a neutral, calm judge,” but “his record and his career clearly show he harbors a right wing, pro-corporate, special interest agenda.”

“Given the chance, I have no doubt he’ll do it again on the Supreme Court,” Schumer added.

Schumer was joined at the press conference by California Democrat Dianne Feinstein, the ranking member on the Senate Judiciary Committee, who questioned whether Gorsuch had been forthcoming in his preliminary answers to the committee.

In a letter to Gorsuch last week, Feinstein asserted that information provided by him about his 2005-2006 employment at the Justice Department raised more questions than it answered.

“With your hearing only six days away, it has come to my attention that your response via the Department of Justice to my letter of February 22 is incomplete and must be supplemented immediately,” Feinstein wrote.

The record does not reflect who specifically was on the floor in 2006 for the 95-0 vote for Gorsuch, but it would have included most, if not all, of the following Senate members that year:

Another Democrat now railing against Gorsuch is Wyden, D-Ore., who penned a critical statement citing Gorsuch's stance on assisted suicide, and insinuated he could not support him this time around.

Asked whether he would again support Gorsuch, Schumer said only that he would wait and see.

“I have some real doubts about He has been a judge who has favored the wealthy interests over the middle class,” Schumer told Fox News’ Bret Baier.

“Judge Gorsuch has repeatedly sided with corporations over working people, demonstrated a hostility toward women’s rights, and most troubling, hewed to an ideological approach to jurisprudence that makes me skeptical that he can be a strong, independent Justice on the Court,” Schumer said in a statement.

Vermont Sen. Patrick Leahy said he would demand “real answers” to questions he has about Gorsuch’s judicial philosophy.

“I hope next week, when the president’s Supreme Court nominee will appear before the Senate Judiciary Committee, he provides transparent, truthful answers to Senators’ questions,” Leahy said in a statement.  “I will insist on real answers from Judge Neil Gorsuch, because there are real concerns about his record and his judicial philosophy.”