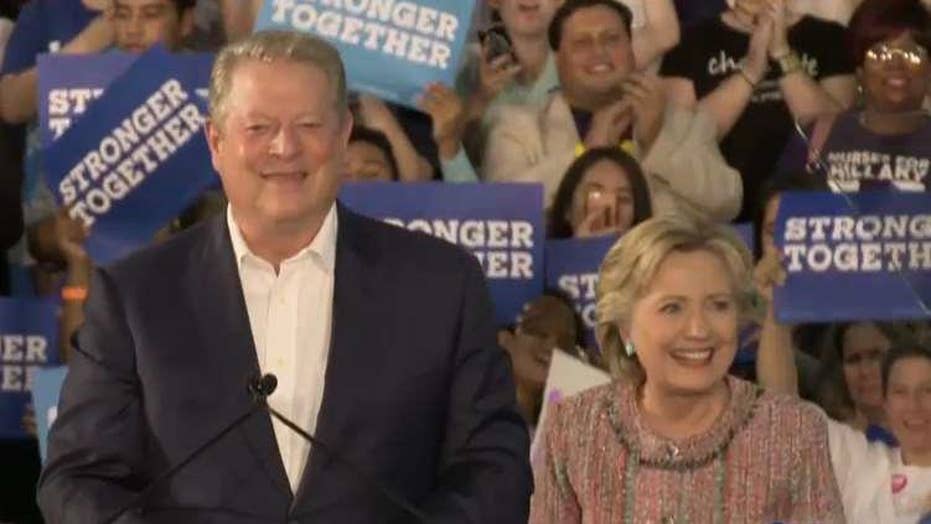 Former Democratic presidential nominee Al Gore re-emerged Tuesday on the national political stage to stump for Hillary Clinton and rally support for action on climate change, the issue to which he has devoted much of his post-Washington life.

“Climate crisis is a top priority, and we must have a president who is passionate about [it],” Gore said while on stage with Clinton in Miami, Fla.

Gore and Clinton have a long political history that dates back to Gore serving as vice president for Clinton’s husband, Bill Clinton, from 1993 to 2001.

Clinton has made green energy and curbs on carbon emissions a big part of her campaign platform. However, the Democratic nominee has not had Gore on the campaign trail until now -- four weeks before Election Day.

“I cannot wait to have Al Gore as my adviser when I’m president of the United States,” Clinton shouted before turning over the microphone to Gore, who largely retreated from electoral politics after losing his 2000 White House bid to George W. Bush in a vote recount centered in Florida.

“Your vote really counts. You can call me Exhibit A,” he told the crowd. “That’s why I’m here, and that’s why I’ll vote for Hillary Clinton.”

Gore served in Congress from 1977 to 1993 before become vice president in the Clinton administration. He started drawing attention to climate change as early as 1982 with House hearings on the issue.

He later won the Nobel Prize in 2007 for his efforts to draw attention to the issue, including with his documentary, “An Inconvenient Truth.”

Gore also was a primary investor in the now-dark Current TV channel.

On Tuesday, he and Clinton hammered Republicans for climate change skepticism – while pushing their own claims about its effects, including Clinton saying global warming contributed to Hurricane Matthew. The storm last week pummeled Florida and other parts of the southern U.S. coast.

“This is not normal. This has become the new normal,” said Gore, who also argued climate change has increased the spread of disease and Western wildfires.

Clinton also argued that the renewable energy industry is now one of the country’s biggest job producers and that Midwestern industrial states including Michigan, Indiana and Iowa are now converting to renewable energy.

“We cannot keep sending climate deniers to Congress, to statehouses and most certainly to the White House,” she said.

She also argued that Republican nominee Donald Trump continues to deny that the world’s overall climate temperature has increased and that he still believes climate change is a “hoax.”