Rep. Steve Scalise shut down a Twitter debate on taxes with Democrat Rep. Alexandria Ocasio-Cortez after at least three commenters made references to the 2017 Virginia baseball practice shooting. The House Republican reacts on 'Fox &amp; Friends.'

U.S. Rep. Steve Scalise, R-La., abruptly halted a Twitter debate with newcomer Democrat Alexandria Ocasio-Cortez of New York early Sunday morning after at least three commenters made references to the June 2017 shooting in which Scalise and three other people were shot by a left-wing activist.

“snipe his a--,” one Twitter user wrote, in support of Ocasio-Cortez. (The user later denied that the post was a call for political violence, writing, "not seeing any violence there sorry" and telling Fox News it referred only to a verbal "sniping.")

“she’s got better aim than James Hodgkinson, that’s for sure,” another wrote, comparing Ocasio-Cortez’s Twitter responses to the marksmanship of the suspect in the Virginia shooting, a Bernie Sanders supporter who later died in a shootout with police.

“Kick his cane,” a third wrote.

As of late Sunday afternoon, Ocasio-Cortez had not commented on the tweets from the users cited by Scalise, even though she has published tweets on other subjects.

The anonymous comments came as multiple news outlets, without offering evidence, reported that conservatives had criticized Ocasio-Cortez for a viral video that surfaced last week showing her dancing on a rooftop while in college. In its article on the topic, Newsweek cited a single anonymous Twitter user to support its contention that conservatives were "mocking" Ocasio-Cortez.

Prior to the Twitter comments, Scalise and Ocasio-Cortez had been debating the Democrat’s proposal for enacting a tax rate of up to 70 percent on income. Scalise had called for letting Americans “keep more of their own hard-earned money.” 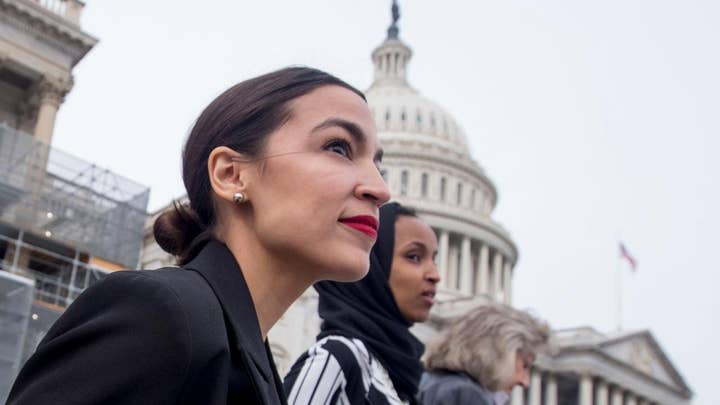 He claimed that Democrats like Ocasio-Cortez instead wanted to tax Americans’ income at higher rates in order to “give it to leftist fantasy programs.”

But after the Twitter followers’ comments appeared, Scalise opted to end the online discussion.

“Hi @AOC,” Scalise wrote to Ocasio-Cortez. “Happy to continue this debate on the Floor of the People’s House, but it’s clearly not productive to engage here with some of your radical followers. #StayClassy."

The 29-year-old New Yorker, who stunned much of the political world in June when she defeated longtime Democratic U.S. Rep. Joseph Crowley in a primary and then won the state’s 14th Congressional District seat in November, has been drawing increased media attention this week – both for taking the oath of office Thursday and for an anticipated appearance Sunday on CBS’s “60 Minutes.”

Previews of that taped CBS interview included references to the Democrat’s 70 percent tax-rate plan, to which Scalise and others reacted during the week.

Scalise, the House Republican whip, was himself featured on “60 Minutes,” in his first TV interview months after the Virginia shooting.

The 53-year-old congressman from New Orleans, who represents Louisiana’s 1st Congressional District, spoke of the “little miracles” he was achieving daily during his recovery.

Scalise would later write about the shooting in the book, “Back in the Game: One Gunman, Countless Heroes, and the Fight for My Life,” which was published in November.