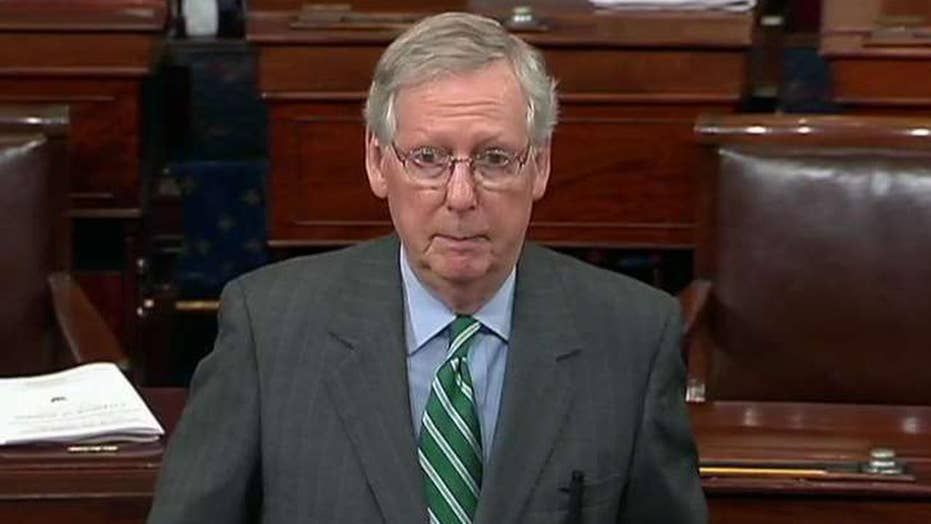 McConnell: ObamaCare is a direct attack on the middle class

Senate Republicans on Thursday unveiled a draft version of their healthcare reform bill that cuts Medicaid, ends penalties for people not buying insurance and reshapes subsidies to low-income users.

The bill, revealed by Senate Majority Leader Mitch McConnell, could go to a vote as early as next week. Senate Republicans made the proposal public in a bid to stem criticism that they have been slow to respond to a House version of an ObamaCare overhaul.

“More Americans are going to get hurt if we do nothing,” McConnell said from the Senate floor.

“More Americans are going to get hurt if we do nothing.”

The 142-page draft of the bill, which also prohibits states from opting out of key protections for patients with preexisting conditions, eliminates much of former President Obama’s signature health care legislation.

The measure would repeal tax increases Obama's law imposed on higher-income people and medical industry companies to pay for expanded coverage. And it would end the tax penalty Obama's statute imposes on people who don't buy insurance -- in effect, ending the so-called individual mandate.

The legislation would face a potential reconciliation battle with House Republicans, who passed their own ObamaCare overhaul in May by a narrow, 217-213 vote.

Some Republican senators immediately rejected the House version, saying they might use parts of it but would largely start fresh.

“To the extent that the House solves problems, we might borrow ideas,” said Sen. Lamar Alexander, R-Tenn., on May 4. “We can go to conference with the House, or they can pass our bill.”

FILE- In this April 4, 2017, file photo, Vice President Mike Pence speaks during a town hall with business leaders in the South Court Auditorium on the White House complex in Washington. Pence is set to arrive Sunday, April 16, in South Korea as President Donald Trump vows that North Korea Kim Jong Un's government is a "problem" that will be "taken care of." (AP Photo/Evan Vucci, File) (AP)

Like the House bill, the Senate measure would block federal payments to Planned Parenthood. Many Republicans have long fought that organization because it provides abortions.

The Senate would also provide $50 billion over the next four years that states could use in an effort to shore up insurance markets around the country.

For the next two years, it would also provide money that insurers use to help lower out-of-pocket costs for millions of lower income people. Trump has been threatening to discontinue those payments, and some insurance companies have cited uncertainty over those funds as reasons why they are abandoning some markets and boosting premiums.

The nonpartisan Congressional Budget Office said the House bill would cause 23 million people to lose coverage by 2026. The budget office's analysis of the Senate measure is expected in the next few days.

Some Republican senators have already expressed skepticism over the legislation, the secrecy in which it was drafted and the speed with which McConnell said he’s like to have it passed.

McConnell has a very slim margin of error. The bill would fail if three of the Senate’s 52 GOP senators vote against it.

"If the bill is good for Nevada, I'll vote for it and if it's not, I won't," said Heller, whose state added 200,000 additional people under Obama's law.

Another Republican lawmaker who could decide the fate of McConnell’s bill is Maine Sen. Susan Collins, who said she was unhappy with the process ahead of Thursday’s announcement.

“The bill Republicans announced today is even worse than expected and by far the most harmful piece of legislation I have seen in my lifetime,” Vermont Sen. Bernie Sanders said in a statement. “This bill has nothing to do with health care. It has everything to do with an enormous transfer of wealth from working people to the richest Americans.”

At the White House on Thursday, Trump expressed hope for quick action.

"We'll hopefully get something done, and it will be something with heart and very meaningful," he said

At a separate event, Vice President Mike Pence, who worked closely with Senate lawmakers on the proposal, touted its merits.

“I want to assure you, before summer’s out, President Trump is going to keep his promise to the American people and we’re going to repeal and replace ObamaCare,” Pence said.

Pence and several Republican lawmakers have been accused of drafting the Senate health care bill in secrecy. In 2009-2010 when ObamaCare was up for a vote, Pence, then a representative from Indiana, took Democrats to task for the very same thing.

“It’s simply wrong for legislation that will affect 100 percent of the American people to be negotiated behind closed doors,” Pence tweeted on Jan. 13, 2010.