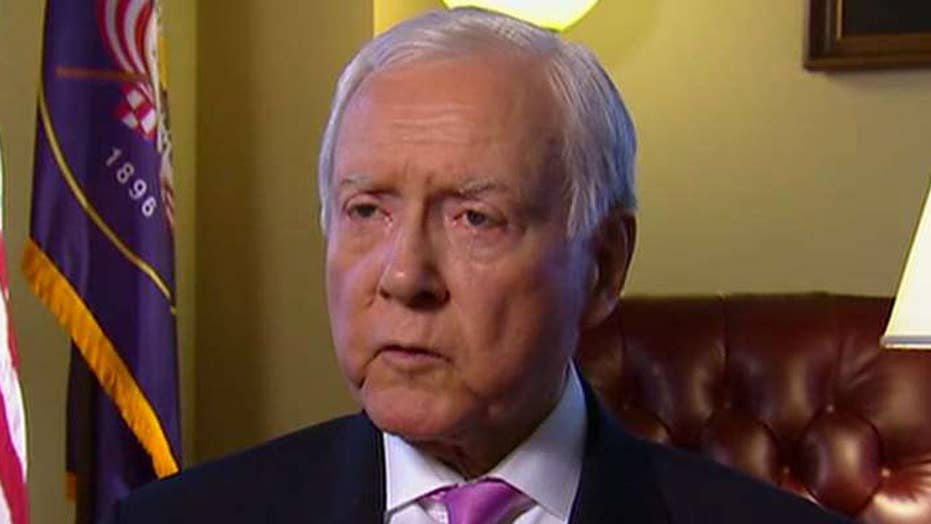 Hatch on Warren rebuke: Democrats have been way out of line

Two Republican senators at the center of an overnight Senate floor fracas that resulted in Democrat Elizabeth Warren being benched are defending their handling of the situation, with one describing the disruption as practically unprecedented.

“We've never had quite the exhibition that we had last night,”  Senate President Pro Tempore Orrin Hatch, R-Utah, who has been a senator since the mid-1970s, told Fox News on Wednesday.

Hatch and Sen. Steve Daines, R-Mont., gave Fox News a behind-the-scenes account, from their side, of what transpired Tuesday night when Warren, D-Mass., was stripped of her floor-speaking privileges for insulting attorney general nominee Jeff Sessions.

“I didn’t go in looking for a fight,” Daines said.

But as Daines listened to Warren argue against Sen. Sessions’ nomination during his hour-and-a-half-long shift presiding over the Senate, he heard language he felt ran aground of Rule 19 -- a rarely enforced rule in place to keep speeches civil.

“Words like ‘shameful,’ ‘disgrace,’ these are words here that should not be used to describe a fellow senator,” Daines said.

So Daines warned Warren. But she continued.

Minutes later, Majority Leader Mitch McConnell, R-Ky., objected to Warren’s language, specifically complaining about a quote she used regarding a decades-old letter written by Coretta Scott King, when King was lobbying against Sessions becoming a federal judge. The letter claimed Sessions used the power of his office to “chill” voting by black citizens.

The Senate later voted 49-43 to keep Warren sidelined for the remainder of debate on the Sessions nomination, expected to run through Wednesday night.

In the wake of the reprimand, Warren has rallied support from fellow Democrats, including 2016 presidential nominee Hillary Clinton. Warren told Fox News she thinks Republicans were objecting to something Mrs. King wrote, and not the tone she was using.

“This is about Coretta Scott King’s letter and that’s all this is about,” Warren said near an elevator just off the Russell Rotunda on the Capitol complex.

Minority Leader Chuck Schumer, D-N.Y., says his colleague from Massachusetts was singled out, declaring Wednesday: “It was the most selective enforcement of a rarely used procedure to interrupt her, to silence her.”

“They hate Trump—and I think that’s a fair word because you ought to hear them behind the scenes,” he said. “And they’re not going to be of any assistance to this president.”