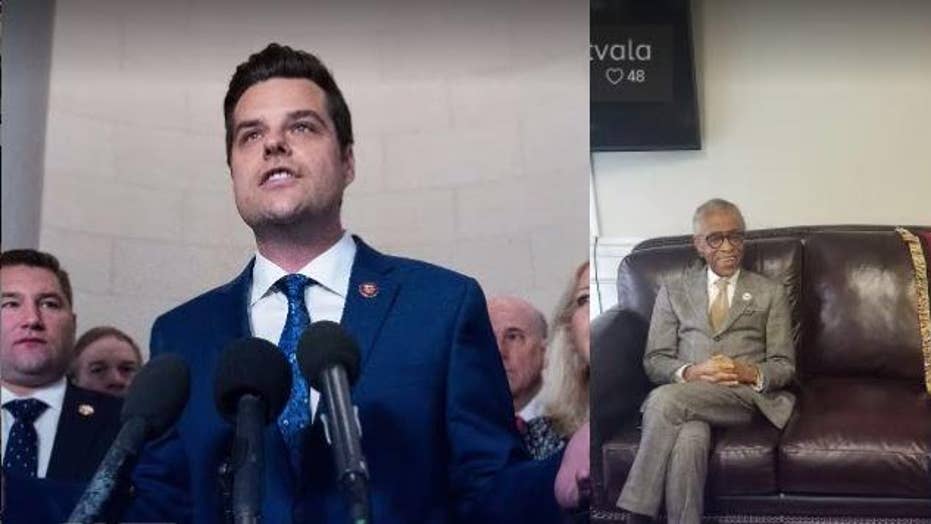 Rep. Matt Gaetz, R-Fla., said he did not create a game that rewarded legislators for sleeping with lobbyists, staffers and married lawmakers after he was accused of doing so by a Florida state representative as part of an ever-escalating and increasingly nasty Twitter fight.

Gaetz triggered the online feud by criticizing state Rep. Chris Latvala, also a Republican, for meeting with Al Sharpton earlier this week. Gaetz pointed out that Sharpton, who has a history of anti-Semitism accusations, has made disparaging comments about a variety of groups — he's called Jews "diamond merchants," Greeks "homos" and police officers "pigs," Gaetz claimed on a Twitter post.

Latvala responded: "And you created a game where members of the FL House got 'points' for sleeping with aides, interns, lobbyists, and married legislators. Hope DC is treating you well, Comgressman [sic]."

Latvala appeared to be referencing a report from Politico's Marc Caputo, who formerly covered Florida politics for The Miami Herald.

The congressman denied that he created the game in a statement to the Tampa Bay Times earlier this week, saying, he had "no idea what Chris was talking about."

Additionally, a spokesman for the congressman, Luke Ball, told Fox News in an email on Thursday that Gaetz “has been falsely accused of creating this gross game” and said Gaetz has “flatly denied it.” Ball added that the accusations have been made “without evidence.”

On Twitter, Gaetz went on to attack Latvala's father, a former Florida senator who was accused of sexual harassment. The allegations led to a $900,000 settlement between the chamber and Latvala's accuser early last year, the Tampa Bay Times reported.

MATT GAETZ: PELOSI'S TALKS WITH DEMS WILL BE 'MORE TENSE THAN A FAMILY MEETING AT BUCKINGHAM PALACE'

"Just because I own you on twitter, don’t confuse me for your daddy when it comes to abusing power for sex," Gaetz shot back. "Also, I missed the defense of Sharpton in your reply."

The Gaetz and Latvala families have a history of bad blood, including a messy 2015 fight over redrawing Florida's Senate districts. The Tampa Bay Times reported at the time that former state Sen. Don Gaetz and former state Sen. Jack Latvala, both Republicans and respectively the fathers of the congressman and state representative, aimed harsh words at each other as the body considered the issue. Specifically, Latvala was blaming Gaetz, a former president of the Florida Senate, for the fact the districts needed to be redrawn because he was at the helm the last time the state did so.

The senior Gaetz was also backing the elder Latvala's chief opponent for the 2016 Senate presidency, the Times reported.

GAETZ CALLS OUT DEMOCRATS FOR NOT DEFENDING KATIE HILL

In response to the congressman's attack on his father, the younger Latvala then brought up Gaetz's 2008 DUI arrest, for which the charges were later dropped: "Have you been drinking tonight? I hope you dont [sic] get behind the wheel. I know you have had a rough few days up there."

Gaetz responded that he spent his, "day talking to my friend & supporter, the President. You spent yours with Al Sharpton."

Latvala closed the conversation by defending his meeting with Sharpton, saying, "I'm not afraid to meet with folks with differing opinions than mine. Hence why I posted the picture on Twitter...."

The accusation-filled Twitter spat comes just months after former Rep. Katie Hill, D-Calif., resigned following reports of a relationship with members of both her congressional staff and campaign staff, including an allegation she maintained a "throuple" relationship between herself, her husband and one staffer.

Gaetz defended Hill and panned members of Hill's Democratic Party for not doing the same.

"I don't know why in the world the left wouldn't stand up for our colleague, our co-worker, when the only person complaining, the only aggrieved party was Katie Hill's ex, who was releasing information to try to ruin her life," he said in an interview on "The Story with Martha MacCallum."