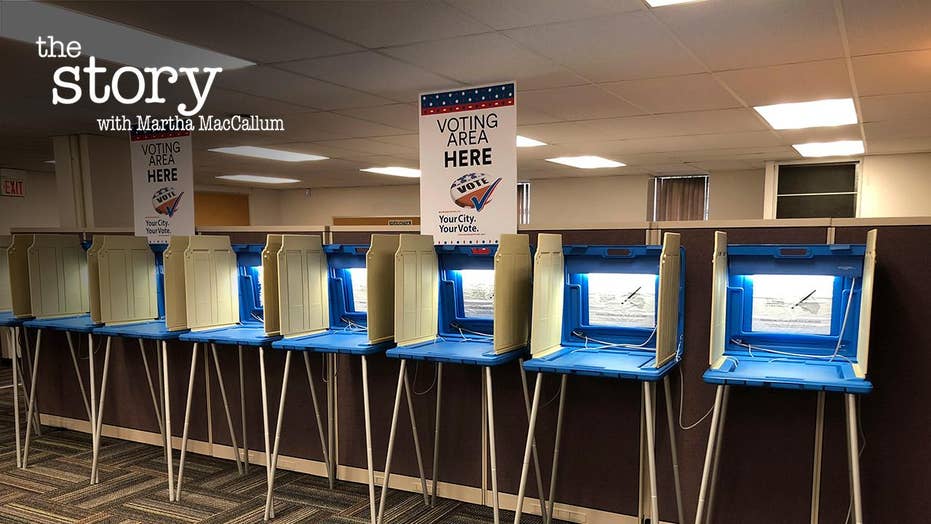 On Wednesday, Martha talks to politically knowledgeable Chris Stirewalt about the upcoming elections and how the midterms are shaking out so far across the country, along with a small update on how things are faring in the South with Hurricane Michael, as Melania weighs in on #metoo.

With less than a month until the midterm elections, Republicans are going on the offensive in several Senate races as part of a reinvigorated effort not only to hold onto their slim majority in the upper chamber but potentially expand it.

Meanwhile, Republicans are strengthening their position to hold seats that Democrats are fighting to flip. Analysts are warning that Democrats, who extensively focused in recent months on longshot bids to derail Republican candidates in reliably red states, may have neglected critical Midwest battleground states in a miscalculation reminiscent of the 2016 presidential election.

Three pivotal Senate races have shifted in the GOP's favor in Fox News' latest Power Rankings, with Texas and North Dakota now considered likely Republican wins, and Tennessee changing from a toss-up to the lean-Republican column.

Those results mirror a Quinnipiac poll from several weeks ago, suggesting that O'Rourke's momentum has flatlined.

O'Rourke's campaign took in more than $38 million last quarter -- setting a record for a Senate race that Democrats now fear they might still end up losing.

"Sen. Cruz would have to suffer a major collapse for him to lose."

And in another high-profile race, Sen. Marsha Blackburn, R-Tenn., has surged to a double-digit lead over challenger Phil Bredesen, according to an in-progress New York Times poll. A CBS News poll last week showed Blackburn leading Bredesen by 8 points.

Bredesen last week secured the endorsement of music superstar Taylor Swift, who said Blackburn's voting records "appalls and terrifies" her. Bredesen broke with his fellow Democrats and voiced support for then-Supreme Court nominee Brett Kavanaugh as a series of uncorroborated sexual misconduct allegations were leveled against him.

“As a woman voter in Tennessee, I felt torpedoed by the statement,” one organizer in Memphis, Rhonda McDowell, told the outlet. 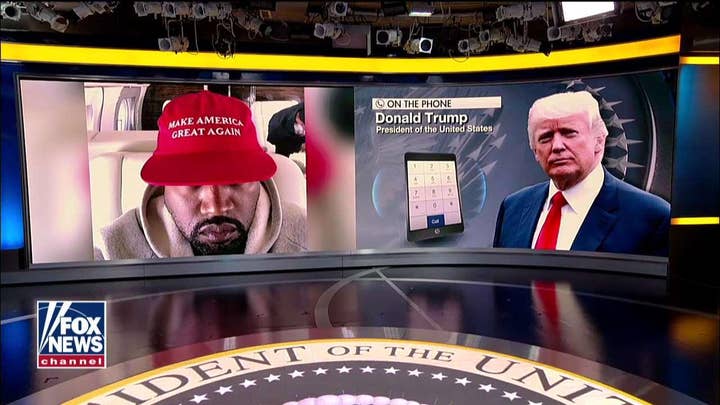 Analysts say that Democrats' faltering bids to retake two seats in traditionally red states has parallels to the 2016 presidential race, when breathless news reports suggested Hillary Clinton had a chance at winning Texas.

GOP ENTHUSIASM SURGES AMID KAVANAUGH SLUGFEST, BOOSTING REPUBLICANS ACROSS THE BOARD

"That reminded me of talks about possible Democratic wins in Arizona, Georiga, and Texas in 2016, when Clinton had to protect the Midwest states," he added.

Missouri and Indiana indeed represent vulnerable seats that Republicans could swipe next month.

Fox News ranks the Senate races in Indiana and Missouri as toss-ups, as incumbent Democratic Sens. Joe Donnelly and Claire McCaskill, respectively, try to fend off challengers in states President Trump won by double-digits in 2016. Both voted against Kavanaugh, which has become a central issue in both contests. 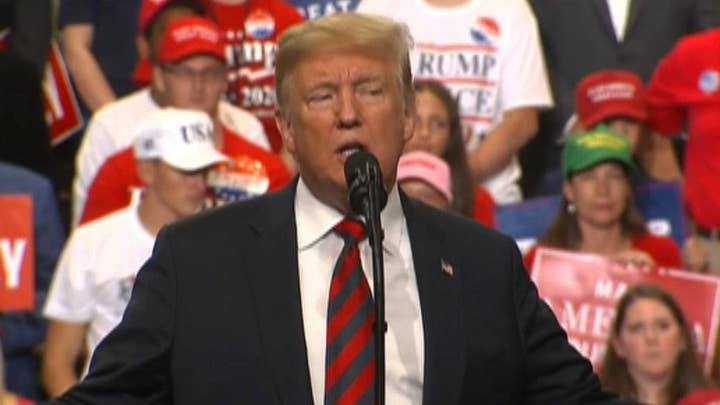 The Kavanaugh effect appears to have had the biggest effect on another vulnerable incumbent Democrat, North Dakota's Heitkamp. She trails Republican challenger Cramer by 12 points. Last month, before Heitkamp voiced her reluctance to support Kavanaugh, he was up by only 4 points.

“That spectacle proved to be perhaps the greatest political gift I’ve been given in a very long time,” Cramer said.

And a new poll in another red state, West Virginia, shows incumbent Democrat Joe Manchin leading Attorney General Patrick Morrisey by just one point. But the poll, which was commissioned by national Republicans and the Morrisey campaign, is an outlier.

Manchin's last-minute support for Kavanaugh, who is highly popular in West Virginia, has become a key issue in the campaign, with Morrisey calling Manchin's vote a "craven political calculation."

"The most recent polling suggests it’s going to be a tale of two elections."

“The fact is I think we are doing really well,” Trump said. “Many of the Senate races that we didn’t think we were going to be contesting, we are now leading. We have some great candidates. And, very importantly, we are finding the same thing now with the House.”

While indicators are strong for Republicans in the Senate, the map is also working in the GOP's favor. There are nine Senate seats currently held by Democrats in states that went for Trump in 2016 but just one Republican incumbent running in a state carried by Clinton.

That state, Nevada, is home to a tight race that Fox News currently considers a toss-up, as incumbent Sen. Dean Heller faces off against Jacky Rosen. And a state that Trump carried in 2016, Arizona, is also considered a toss-up, as Democrat Kyrsten Sinema has polled narrowly ahead of Republican Martha McSally to replace outgoing Republican Sen. Jeff Flake. 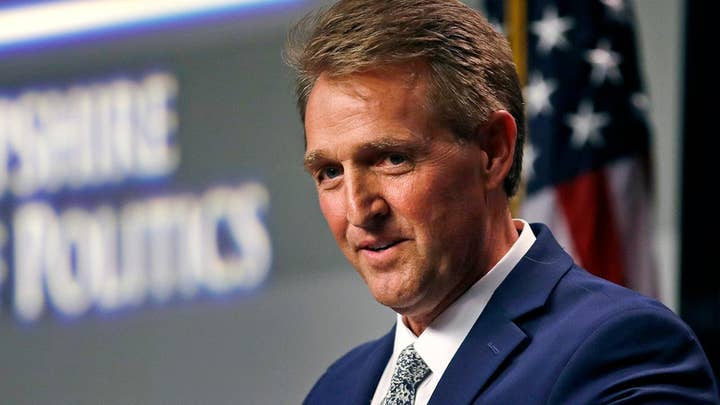 Meanwhile, in the House, where all seats are up for grabs, signs are less favorable for the GOP. A new poll from Quinnipiac University showed that 49 percent of voters preferred that the Democrats take back Congress, compared with 42 percent for Republicans.

ANALYSIS: WHAT TO EXPECT AS MIDTERM CHAOS CONTINUES

Mehlman pointed to other signs of a possible impending "blue wave" in the House. For example, Trump's approval rating is roughly consistent with that of other presidents' in recent decades when their party saw major losses in Congress. Presidents with higher approval ratings tend to see their party retain more seats.

Still, there were some signs of resurgence this week for Republicans in the House, as well.  Florida’s highly competitive 27th Congressional District, which Clinton won by a 20-point margin over Trump in 2016, had been considered one of the easiest seats in the country for Democrats to pick up just months ago. 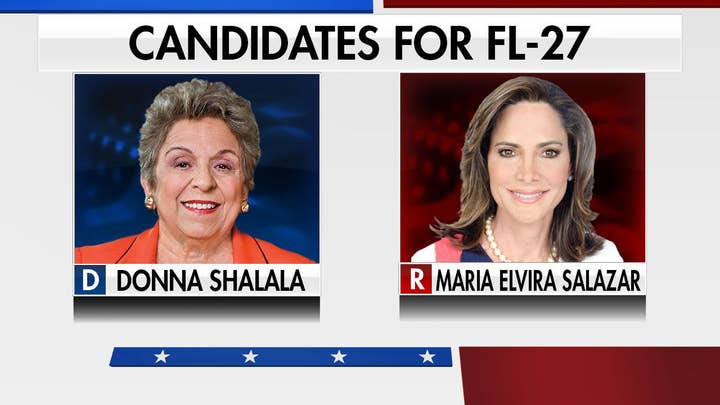 “This will be the marker for, if and possibly when, the Democrats might pick up the House for the 2018 elections,” said Florida International University political science professor Kathryn DePalo. “If Democrats pick this up, then I think it’ll be a good night for Democrats in Florida and perhaps around the country.”

In a statement to Fox News, a spokesperson for the National Republican Congressional Committee was bullish on the district: "In a district that Clinton won by 20 points, this is shaping up to be a devastating loss for Democrats.”